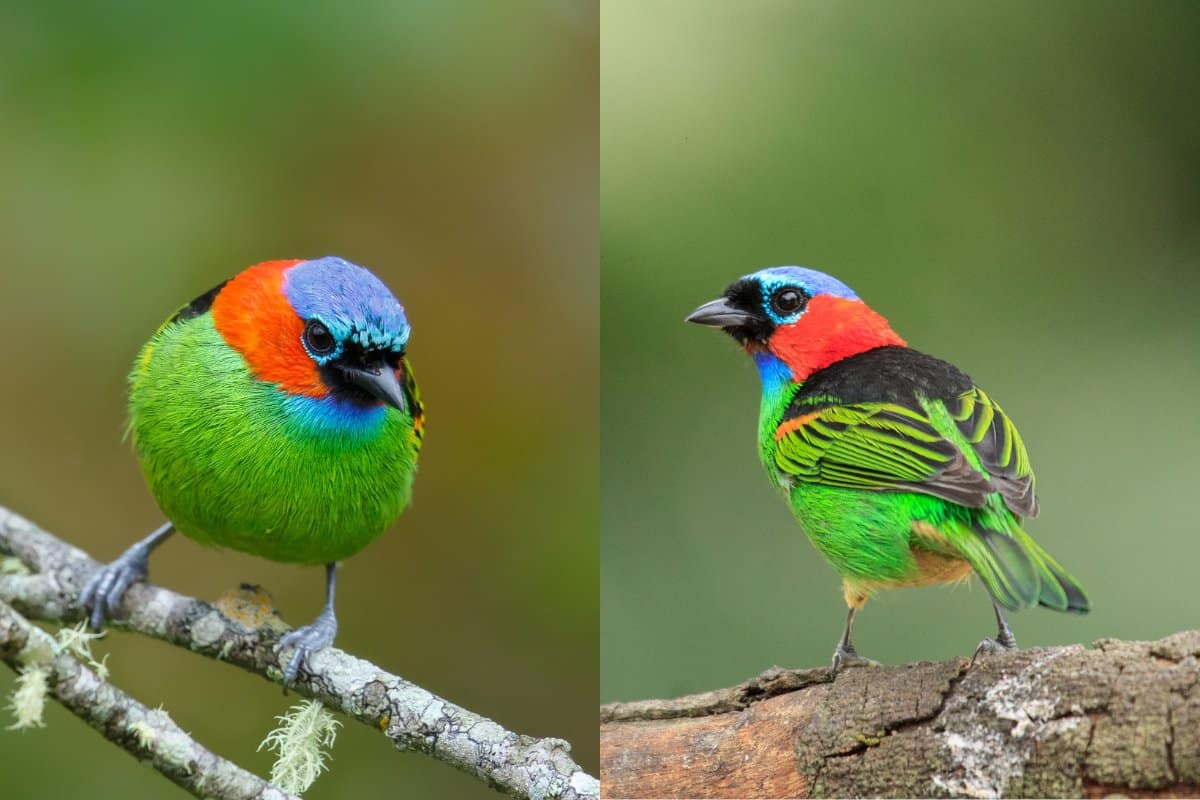 Tanagers are tropical, often brightly-colored songbirds. Some species of tanagers spend the warm months of the year in North America, then migrate south for the winter. Others live year-round in South America. A unique and colorful example is the Red-necked Tanager. Read on to learn nine facts about Red-necked Tanagers!

1. The Red-necked Tanager lives only in South America.

You can spot the Red-necked Tanager in just a few parts of South America. It prefers to live in the coastal forests along the Atlantic side of the continent. Unlike other migratory tanagers, they live year-round in the same place.

Most Red-necked Tanagers live in Brazil, but some also venture south into Argentina and Paraguay.

2. They will sometimes visit feeding stations.

Most human activity in these environments is agricultural, which presents less of a disturbance to the birds compared to suburban or urban development. If you live within their habitat, they may visit your yard if you leave out sliced fruit.

3. They like rainforest edges, open woodlands, and high-humidity areas.

Most of southeastern Brazil was logged in centuries prior, but that didn’t wipe out the Red-necked Tanager. This bird is hardy and adaptable. They live on the edges of old-growth forests, new forests, and undergrowth-heavy areas.

Brambles, hedges, abandoned fields, and underbrush are great places to look for them too.

4. Males are brighter than females.

Even though both males and females have a red ‘scarf’ around their necks and mostly similar plumage, males are more brightly colored than females.

While females have the green, red, and blue patches, the red patch is more of a dark orange or copper color. The black mantle is not entirely black; instead, it’s patched with green and gray.

5. They have clearly-defined bright colors, including a red neck.

Tanagers are often colorful birds, but Red-necked Tanagers are some of the brightest tropical birds in Brazil! They are green, black, yellow, red, and blue, most in very defined, “color-block” sections. Both males and females have patches of colors, but males are brighter than females.

It’s easy to identify the Red-necked Tanager by way of its scarlet ‘scarf’ patch of feathers on its neck. That should be the first thing you see when searching for one in thick foliage or bushes.

Red-necked Tanagers are birds which prefer the tops of the tall trees. However, they will venture down to lower levels of the forest to find food. They eat both fruit and insects. Common fruit in their diet includes pokewood, melastomes, urtica plants such as nettles, and myrtle.

In wilder areas, they eat fruit from the tops of tall trees. Areas with more human development have fewer trees and more bushes. Here, Red-necked Tanagers prefer to eat the berries from those bushes.

7. The Red-necked Tanager can live in recovering areas of rainforest that were once logged.

Unlike many other birds in the Amazonian rainforest, Red-necked Tanagers are not classified as threatened or endangered. These adaptable birds can actually adjust to the changes from rainforest clearing, logging, or development.

Some of these changes including existing adaptations to ‘edge’ habitat. Red-necked Tanagers naturally prefer habitats within the transition zone between one type of ecosystem to another.

The Red-necked Tanager’s scientific name is Tangara cyanocephala. In Latin, that name has several parts with different meanings that combine into its full name:

9. Parents cooperate when taking care of their chicks.

Red-necked Tanagers work together to feed and raise their chicks. They build a nest high in the trees among the leaves and stems of epiphyte plants. This group of plants includes orchids and bromeliads. Their dense tangles of leaves and stems provide necessary structure for building a nest.

The nest usually holds about three eggs. Breeding season lasts from September to December. Seasonality isn’t as important in the tropical parts of South America as it is in temperate North America because warm weather remains for most of the year.