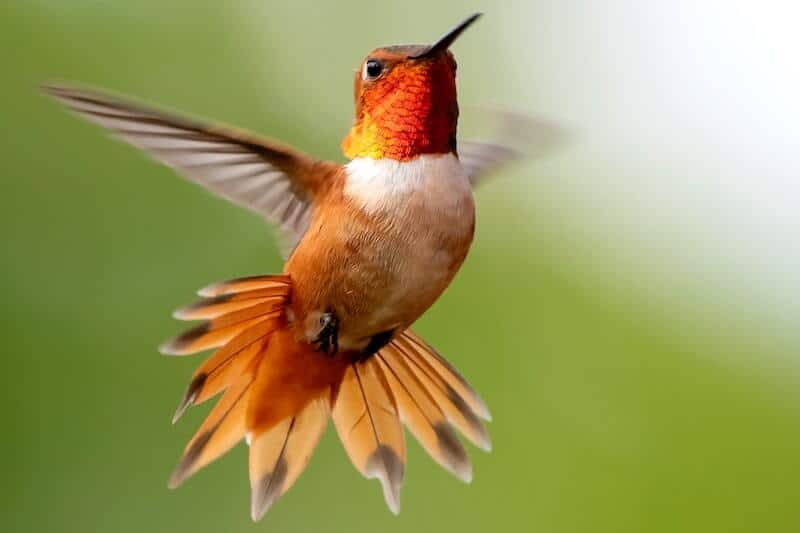 Based on the range maps of authoritative sources like allaboutbirds.org and ebird.org, we’ve put together a list of hummingbirds that can be seen in the state of Indiana. For each species in this list you’ll find the species name, pictures of what it looks like, specifications about appearance, and where and when you may be able to spot them. We will list the 2 more common species first, and the 2 rare ones last.

Ruby-throated hummingbirds are seen throughout Indiana during the spring and summer months. They will arrive in April and May and leave in September.

In the spring they migrate up through California, spend the summer in the Pacific northwest and Canada, then zip back down through the Rockies in the fall. While the rufous is considered a hummingbird of the western U.S., they are probably the second most commonly sighted species in the east after the ruby-throated hummingbird.

Calliope Hummingbirds are considered quite rare on the east coast, however they have been spotted in Indiana at least twice near Indianapolis and Evansville. So there is always a chance that others stray into the state from time to time.

Anna’s actually stay in the U.S. all year within most of their range, however you’ll only find them regularly in a few of the western states like California and Washington. The green of their feathers tends to be a bit brighter and more iridescent than most others, and even their chest and belly are sprinkled with emerald feathers. Males have rosy-pink throats and those colorful feathers extend up onto their forehead.

Anna’s are pretty uncommon outside of their range, however they do stray and most states in the central and eastern part of the U.S. have spotted them at least once. 2021 logged the first recorded sighting in Indiana on eBird, when some lucky birdwatchers spotted an Anna’s in the town of Highland. While they are clearly a rare hummingbird for the area, I left them on the list because Anna’s have been sighted in surrounding Wisconsin, Illinois and Ohio, so there is always a possibility for one to drift into the state.