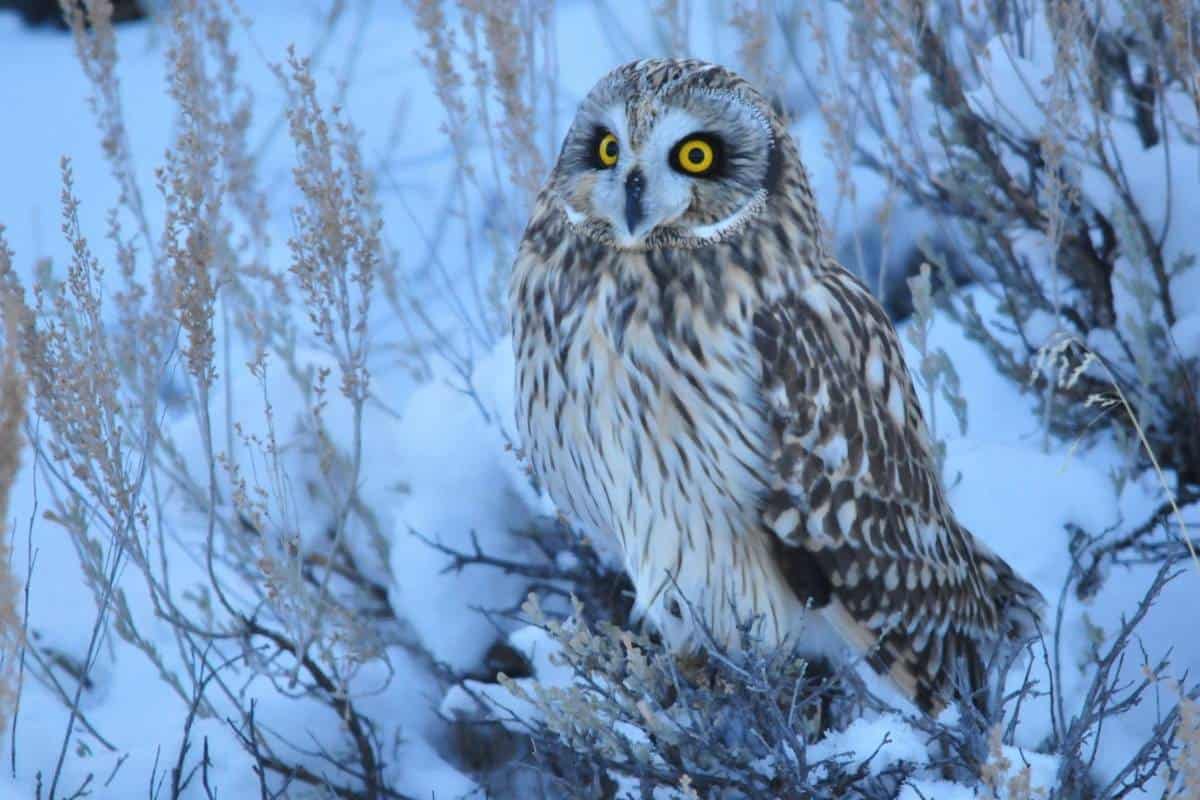 The mysterious owl is a favorite bird for many. The fact that most of us never see them due to their camouflage and nocturnal habits makes them all the more fascinating. It can also lead you to wonder just how many different kinds of owls can be found where I live? In this article we will look at the 9 species of owls in New Hampshire.

Aside from the rare vagrant, these are the 9 species of owls you will find in New Hampshire: the barn owl, the barred owl, the eastern screech owl, the great gray owl, the great-horned owl, the long-eared owl, northern saw-whet owl, the short-eared owl and the snowy owl.

New Hampshire is not technically part of the barn owl’s range. However, they can be found in some surrounding states so may be spotted in New Hampshire from time to time They can be found mainly in open habitats such as grasslands, fields, ranches, agricultural land and strips of forest.

The beautiful brown and white striped barred owl is found throughout New Hampshire all year, and is fairly common. These birds really like to stay close to home, often not even leaving a 10 mile radius.

This tiny owl is common year-round across most of the eastern United States, including the southern half of New Hampshire.

Great gray owls are found year-round across Alaska and Canada, but aren’t found in too many places in the continental United States. New Hampshire falls into their possible winter range, although they are still considered fairly rare in the state.

Great horned owls are one of the most common and recognizable owls in North America due to their large size, yellow eyes and “horns” which are tufts of feathers that stick up on either side of their head. They do not migrate, and remain in New Hampshire year round. Like the barred owl, they are fairly common throughout the state.

Long-eared owls are migratory and can be found in New Hampshire mainly during the breeding season, although they may be seen during the winter in the southern portion of the state. Their preferred habitat is pine stands or woods near grassland and pastures, but aren’t very common.

Their excellent camouflage and secretive nature of roosting in dense woodlands tends to make them hard to find. Listen for their long, low hoots on spring and summer nights. In the winter, they may roost together in groups.

They stick around in New Hampshire all year, preferring dense and mature forests. Their diet mainly consists of small mammals such as mice and voles.

Short-eared owls spend the summer almost exclusively in Canada and the northern United States. They may remain year-round in the far northern portion of the state, but tend to only be seen during the non-breeding months through most of New Hampshire.

Snowy owls have a wintering range throughout most of Canada, but this owl has been coming further and further south into the United States each year. In New Hampshire at least a few can be spotted each year during the winter months. The amount can vary quite a bit year to year.

If there are snowy owls near you, they are not as difficult to spot as other owls due to their bright white plumage. Unlike most other owls, they are diurnal and thus active during the day. They prefer wide-open spaces for hunting, like fields and beaches.