Barred owls are amazing hunters, beautiful animals, and a treat to see if you’re ever lucky enough. Wanting to catch a glimpse of these beautiful predators is not reserved for bird-watchers alone. You may find Barred owls have been right under your nose, but because their plumage is perfect for blending, you will never have known it. We gathered 35 facts about Barred Owls to help you learn more about this raptor and possibly even increase your chances of identifying one.

1. Barred owls got their name because of the vertical bars and horizontal bars on their abdomen and chest.

2. Barred owls are also referred to or known as the striped owl, Northern barred owl, or even sometimes a hoot owl.

3. Their scientific name is Strix varia.

5. Their eyes are tube-shaped, like binoculars, giving them excellent depth perception and large eyes to help more light get in during the night, giving them better vision than even humans at night. A Barred Owls eyes are one perfect adaptation that has made these birds perfect predators.

6. Barred owls have excellent hearing but did you know they have asymmetrical ears to triangulate sound? One ear is located higher on the head and the other lower. This helps them hear their preys’ precise location.

7. Barred Owls actually have a terrible sense of smell.

9. Barred owls are large with rounded heads, mottled brown and white all over with dark eyes almost black.

10. They can be found living in the north and now Northwest America.

11. There are three subspecies of the Northern barred-owl, Texas, Florida, and the Mexican barred owl.

14. Barred owls can be territorial and dangerously aggressive towards humans, having been known to dive-bomb humans, targeting the head, when they feel threatened.

15. People believe the Barred owl is symbolic of protection.

16. Barred Owls do not typically breed until they are at least two years old.

17. Barred owls breed between March and August, having one clutch of 1-5 eggs per year.

18. Barred owls will care for their young for around four months, much longer than most other owl species.

19. They will mate for life, meaning one pair can be together for upwards of 20 years.

20. Barred owls make their nests in pine, spruce, fir, and cedar forests. They require mature, dense forests so they can find large trees with cavities for nesting.

21. Young Barred Owls can walk their way up the trunk of a tree by grasping the bark with their bill and talons and flapping their wings. 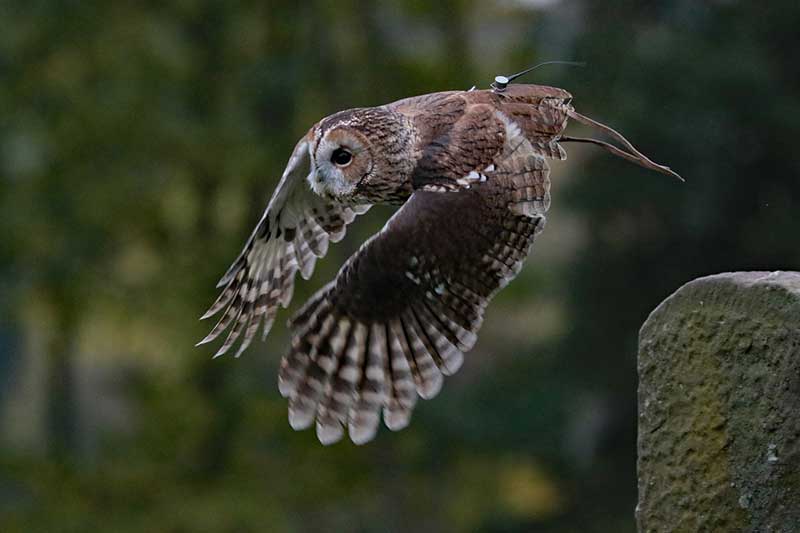 22. Owls can carry about 4x their weight.

23. Barred owls will and can eat small cats and dogs.

24. During the day, you can find these owls roosting on branches and in tree cavities, hunting mainly at night.

You can scare barred owls off by

26. Barred owls can pass completely unnoticed as it flies. They are close to noiseless. Barred Owls are able to move at slower speeds without flapping, and the structure of their feathers acts as a silencer. They have comb-like serrations on their wing feathers that break up the air that creates the typical swoosh sound.

27. The Great Horned Owl is one of the most serious threats facing the Barred Owl.

28. A Barred Owl will move to another part of its territory when a Great Horned Owl is nearby to avoid it. 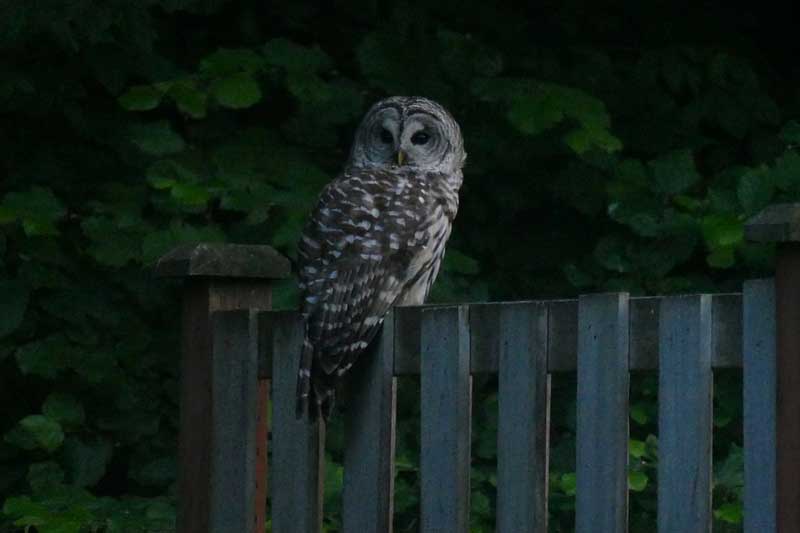 29. Barred Owls have been around for at least 11,000 years. Pleistocene fossils have been dug up in Florida, Tennessee, and Ontario.

30. Barred Owls don’t migrate, and they will live in the same area their whole lives, having only moved a few miles during that time.

31. The oldest recorded Barred Owl was at least 24 years old. It was banded in Minnesota in 1986 and later found dead, entangled in fishing gear, in 2010.

32. The Barred owls’ conservation status is ranked as leased-concerned, with their population growing in numbers.

33. Owls hoot to claim territory, communicate with their mate, and signal danger.

34. Barred Owls will maintain the same territory and multiple nesting sites for many years.

35. Barred owls bob their head because they can not move their eyes. This helps them be able to see and view things they typically could not.