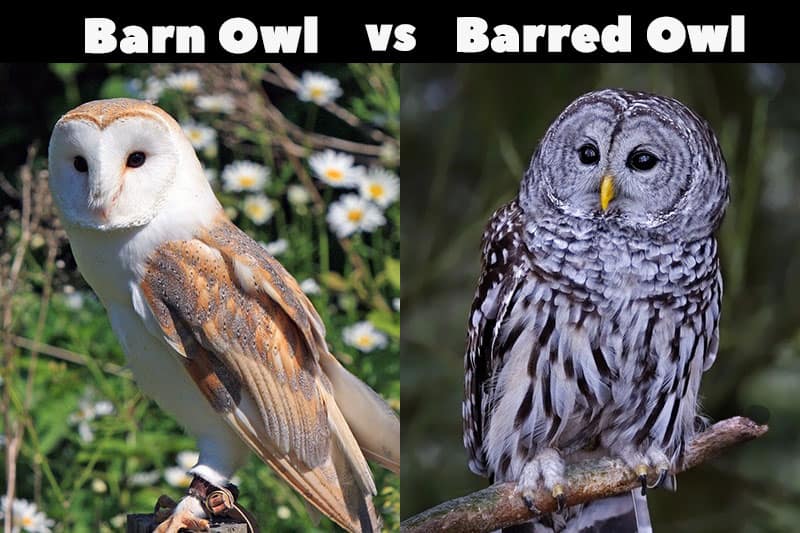 Owls are elusive, which makes opportunities to correctly identify them scarce. This article will give a comparison between the Barn vs Barred Owl, so when you get that lucky opportunity you’ll be able to identify them with confidence!

This article will give you pointers of what to look and listen for when faced with an ID opportunity, as well as a little bit of life history about each bird.

These two owls don’t have many striking physical similarities, but to someone who is new to birding or unfamiliar with the world of owls, confusion is not uncommon.

Their names are similar, which can be just enough to throw off your ability to identify them correctly!  After taking a look at the pictures for each species below, you’ll see that they are actually quite different and easy to tell apart.

Let’s go over what makes these birds unique.

The Barn Owl goes by many, many names, some of which include Ghost Owl, Demon Owl, Golden Owl, and Church Owl, just time name a few. It’s species name, Tyto alba, translates to “white owl”. Barn Owls are the only representative of their Family in the U.S.

These owls live in open habitats that allow them room to fly. They aren’t particularly picky, and can be found in grasslands, deserts, marshes, agricultural fields, strips of forest, woodlots, ranchlands, brushy fields, and suburbs and cities. They like to nest in dark, quiet cavities, whether manmade (like a barn) or natural.

They like to feed mostly on small mammals. Some of the most common meals are mice, voles, lemmings, and rats, but they will also eat rabbits and bats. They have been known to store several of these prey at the nest while incubating in order to feed their babies when they hatch.

Barn Owls are found year round throughout the U.S., but populations decrease in density the farther north you go.

These owls are really quite beautiful, despite what some of their names suggest. They are golden pale on top with a soft, heart shaped face. Their eyes are dark and their bellies are stark white, giving them the ghostly appearance.

Barred Owls are members of the “true owl” family and the “wood owl” genus. It was first recorded in 1799 by Benjamin Smith Barton and was named for the streaking on its belly.

These owls like mature deciduous forests that have mixed species and uniform coniferous forests. They especially like swampy areas or other watery areas.

Barred owls have a varied diet that includes small mammals, birds, reptiles, amphibians, fish and invertebrates. They will perch over water waiting for fish and crawdads, and will even wade into shallow waters to catch some.

These birds inhabit the Eastern parts of the U.S., tracing up and across Canada’s boreal forests. Their range is extending down into Washington and Oregon. They are year-round residents.

This chunky bird has a mottled brown and white back and wings. Their pale bellies have distinct brown streaks running downward from the neck. Their eyes are starkly dark.

7 differences between Barn and Barred Owls

1. Barn Owls have a screechy voice

Barn owls have a harsh, screech call that doesn’t sound much like an owl. Barred owls have a deeper “who-cooks-for-you” call that can sound like a dog from far away.

Aside from them both having dark eyes, they look very dissimilar. Barn owls are very pale in comparison and lack all the dark mottling and streaks that the Barred owls have.

Barred owls are almost half a foot taller than Barn Owls. Interestingly, their wingspans are comparable.

4. Barred Owls drop on their prey

Barred owls will wait on a perch and drop down on their prey, whereas a barn owl will soar across fields to snatch up their meals.

A barred owl will only have 1-5 babies in their clutch, but a Barn Owl can have anywhere from 2-18!! The average for a Barn Owl is roughly 5-7.

Barn Owl nestlings will stay with their parents for 50-55 days. Barred owl nestlings only hang around for 28-35 days.

After comparing these birds, it’s pretty easy to see that the only thing similar about them is their name! To a non-birder, it could be pretty easy to mix those up.

Hopefully this guide has helped you learn something new about these owls!