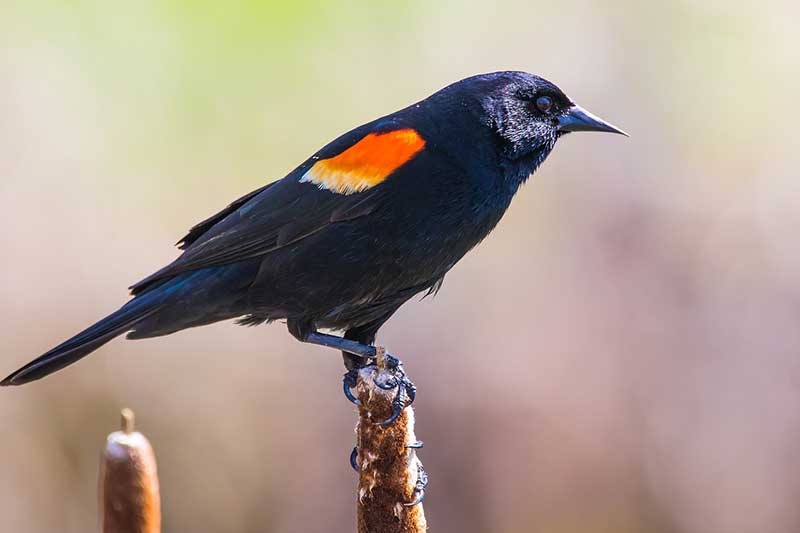 The combination of black and red is fairly common in the bird world, especially in woodpeckers. However if you want to narrow that down to black birds with red wings, there is really only one bird in the U.S. and Canada that makes the list. The red-winged blackbird.

While there are several species of red birds with black wings, the red-winged blackbird stands out for being entirely black except for a red feather patch on the “shoulder” of its wings. A bird that comes in a close second would the American redstart, but despite having red in its name, the color on the wing of this black bird is orange rather than red.

One of the most well-studied North American birds, the red-winged blackbird was first named scientifically in 1766. It has since been the subject of numerous scientific studies because of its widespread range and successful adaptation to human-affected landscapes.

Keep reading to learn more about the red-winged blackbird.

The red-winged blackbird is the only black bird with red wings in North America. It is a marsh-dwelling species of blackbird that eats both seeds and insects.

Whether you’re a seasoned birdwatcher or have just begun learning about these feathered marvels, chances are you’ve probably seen or heard a red-winged blackbird. Gregarious and common around agricultural areas, they are hard to miss! 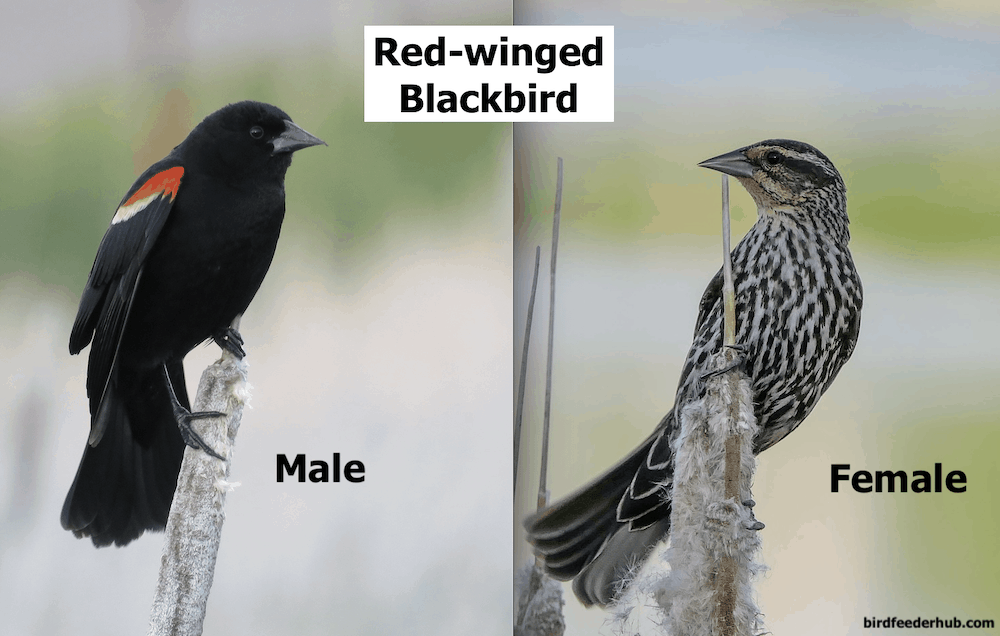 Only males have the characteristic shiny black body and bright red wing patch. The patch can be seen both in flight and when the bird perches. It is especially visible when he sings, since he spreads wings out slightly to make himself look bigger.

The wing patch consists of a bright scarlet patch along the upper wing, bordered by a stripe of yellow and white on the bottom edge. They can sometimes tuck their fancy wing coloring so that instead of a large red patch, all you can see is a small strip of red and yellow.

Females look quite different. They are heavily streaked with cream and brown all over, which helps them blend easily into brush and reeds. They have a tiny hint of red on the upper corner of their wing, which is often hidden. Along with being hard to spot, they are easy to mistake for juveniles. The young birds look similar to females until male juveniles begin to molt into their adult plumage.

Female red-winged blackbirds are about three quarters the size of males, which average around 9 in (23 cm) long and 2.3 oz (64 g). This puts females at about the size of a large sparrow. Males are slightly bigger.

Coloration is slightly different in California, with this variation called the “California Bicolored”. Males have only red on the wing, without the yellow border. Females are a darker, more cinnamon brown with less streaking.

Red-winged blackbirds are native to the North American continent. They are very common in suburban backyards and open fields, especially in the spring. Populations can be found year-round throughout most of the United States, as well as the west coast of Canada, and parts of Mexico into Central America.

Throughout most of Canada, northern New England and areas around the Great Lakes, they are only seen during the spring and summer. Some populations choose to fly from Southern Canada and the northern Great Plains south into western Mexico to spend the winter.

Swamps, fields, and areas adjacent to water sources like ponds and human-made drainage ditches are prime habitat for red-winged blackbirds. Wherever they go, it’s sure to be near a source of freshwater.

Being close to water increases the chances that the blackbirds will find stable insect populations. It also provides a safe area for nesting during the breeding season.

Once a female mates with her chosen partner, she takes his suggestion for where to build the nest within his territory. Red-winged blackbirds like to build their nests among reeds and stems in swampy, soggy areas.

The female deftly weaves plant material around thick stems to create a platform, used as the base of the nest. On top of that, she creates a nest cup out of soft, rotting wood, wet leaves, and mud. Once the nest cup dries, she finds soft grasses to line the inside of the cup with. Only then is she ready to lay her eggs.

This bird’s eggs are bluish or greenish. Females generally lay a clutch of three to four eggs. Both parents take turns bringing food to the nestlings, but the female puts in more work than her mate.

Red-winged blackbirds eat both insects and seeds. They focus more on insects while they are plentiful during the spring and summer, then switch over to more seeds during the fall and winter.

In the summer, large fields and wetlands provide great insect hunting grounds. They can case insects while flying, or probe for them around vegetation as they walk through cattails and lilypads. Red-winged blackbirds are adept at both hunting through the stalks at water level, as well as perching on the tops of reeds and cattails.

After the breeding season is over, they are often found traveling in large flocks searching for seeds, which frequently contain multiple species such as starlings and grackles.

Attract these blackbirds to your backyard by offering a variety of feeding locations, since the size and noise of their flocks can scare away other birds. Offer cracked corn in an area away from your primary feeders if you have the space. They will also visit most types of feeders for mixed seed, as long as the perch is large enough for them to get a foot-hold. Platforms feeders are most comfortable for them. Red-winged blackbirds are also known to eat suet and have no problem clinging to suet cages.

In the wild, Red-winged Blackbirds are often seen hanging around wheat fields and mills. They eat the discarded and wasted seeds that spill on the ground when farmers transfer product between trucks, silos, and train cars.

Some birdwatchers consider red-winged blackbirds to be pests, while others see them as noisy but welcome backyard visitors.

During the breeding season, which lasts from April to the end of July, males are loud and obvious. A single bird will stake out his territory before the females arrive – if he’s part of a migrating population – and vigorously defend it against bird and beast alike. They are even known to intimidate human intruders into their territory.

Once he spots a female, the male begins to perform. A red-winged blackbird’s mating display goes like this:

After attracting a female, males are somewhat ‘helpful’ to their mates. The blackbird father will help feed the young, but generally, he is too busy to do much because he can have up to 15 mates, all living on his territory, in a single breeding season!

Red-winged Blackbird symbolism tends to focus on their social and outspoken nature. Some people say these birds can even be totems, or spiritual guides, for people who want direction and guidance in their day-to-day choices.

The bird’s loud, unmistakable call goes without saying that having a real and authentic voice is one of the qualities it represents. These blackbirds are talkative, inquisitive, and ready to speak their mind to the world.

Hearing the song of a red-winged blackbird can be a reminder to stay true to your convictions and to stand by those around you, even if you’re in a crowd.

When flocks of red-winged blackbirds travel, their groups can reach sizes of up to one million birds! It takes a lot of cooperation and ability to get along with your peers to keep a group of that size successful in traveling together and finding food.

This aspect of the red-winged blackbird can remind us that sometimes to achieve our goals, we need to work with others. Skills like understanding, listening, and collaboration can sometimes help you get ahead.

In Medieval times in Europe, before many people could read, fables starring animals were used to tell parables that children and adults could remember and apply to real events in their lives. Hundreds of years later in North America, the red-winged blackbird was occasionally used to symbolize sin and temptation.

In America, poets and storytellers were captivated by the dynamic color contrast of black body and bright red wing patch. Some say that the blackbird represents Cain, who killed his brother Abel in a fit of rage. The red patch on the bird’s shoulder is the blood that was shed in the first murder ever committed.

Others see the blackbird as a premonition of evil. Blackbirds traditionally have been part of horror stories and legends of witches. Old wives’ tales consider blackbirds to be a source of bad luck. A perhaps unfortunate fate for most birds that are black in color like crows and ravens.

It may be a surprise that the red-winged blackbird has such a rich natural history. These nondescript, yet easy-to-recognize songbirds have far more influence on today’s world than we realize. They provide insect control and eat waste seeds that would accumulate in agricultural areas.

If you’re ready to see more of these dynamic, gregarious birds, why not put out some seed or cracked corn? You’re in for a treat! For many people that have lived near fields or wetlands, red-winged blackbirds are the soundtrack of summer.