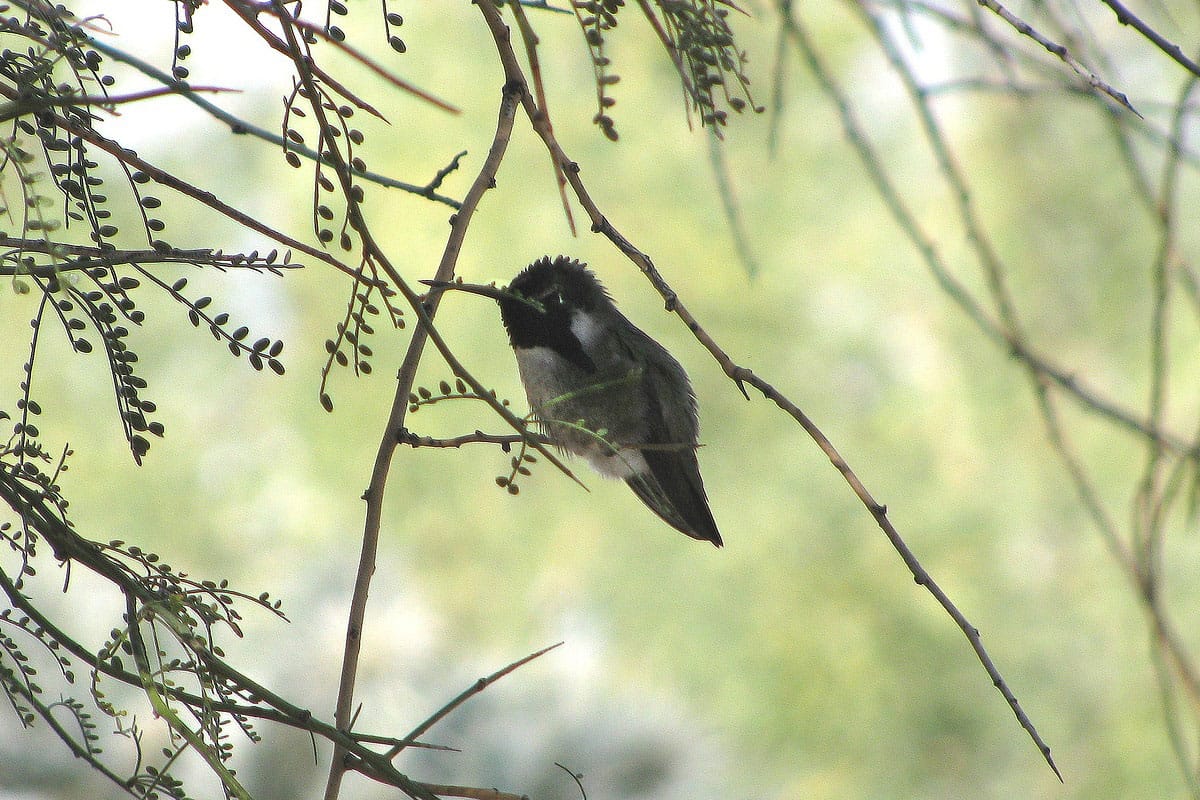 There are 352 species of hummingbirds in the Americas, with as many as 15 of those species regularly occurring in the U.S. and Canada. An additional 9-10 species will occasionally make an appearance in the states and are considered vagrants. The species we’re looking at in this article is the Costa’s hummingbird, a regular resident in southern California and Baja, as well as a migrant between the southwestern U.S. and Mexico. We’re about to show you some up-close and personal images of this amazing species, and share some interesting facts and information. Without wasting anymore time, let’s get to the good stuff!

These medium-sized hummingbirds are at home in the heat of the Sonoran and Mojave deserts, as well as the coastal breezes of the Baja peninsula. Costa’s hummingbird are more shy than other species, but can still be attracted to backyard feeders.

Costa’s hummingbirds have a “squat” appearance, with a short neck and short tail. Their bill is also a bit shorter than most other species. Costa’s are covered in mostly green and gray, though the males and females are easy to tell apart if you know what to look for.

Male Costa’s hummingbirds have an iridescent purple throat and crown that can look almost black if the sunlight isn’t hitting the feathers just right. Their purple gorget feathers extend out on either side of the throat, like a big purple mustache. They have a green back, white chest and pale green along their sides. Immature males will slowly gain these purple feathers, giving them a spotty appearance as the purple feathers grow in one by one.

Females have a green back, a pale grayish head and cheek, and pale underparts. If you get a good close-up view, they have a small white eyebrow stripe, and white spots on their tail corners. Costa’s females have an un-marked throat, which you can use to tell them apart from some females of other species that may have throat spotting.

An interesting behavior of the Costa’s hummingbird is the unique courtship displays that the males perform for the female during mating rituals. That’s where those interesting long face feathers come into play.

Males will perform a flying display, heading straight for a watching female then circling around her a few times before flying straight up then diving down in a big U-shape, all the while letting out a high-pitched chirp. They can continue this aerial display for several minutes. If that isn’t getting the message across, they will hover just inches away from the female and rock back and forth, fanning out their facial feathers to catch the sunlight creating a wall of purple. Check this out in the video below.

Male’s will defend their territory, and usually choose between 3-4 perches they can use to look for intruders. Perches tend to be dead twigs on plants such as ironwood, acacia or palo verde. However, Costa’s aren’t as aggressive as other species, and while they will engage in some “fighting”, they will often be subordinate to larger hummingbirds. 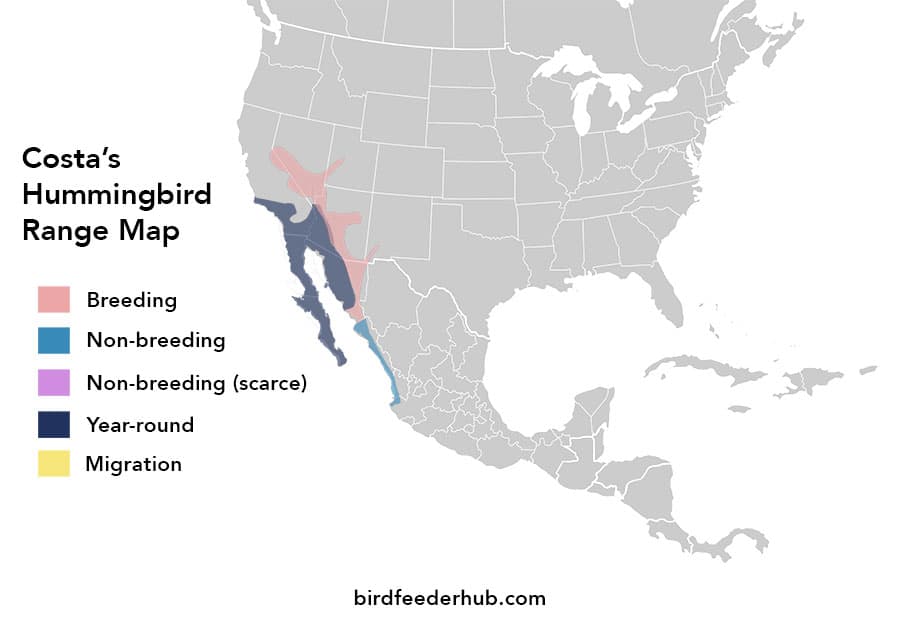 Costa’s both remain all year in certain locations as well as perform short-distance migrations. The population that remains in one area all year can be found in far southern California, Baja California (Mexico), and the Sonoran Desert in southwestern Arizona and northwestern Mexico.

The migrant population spends winters along the western coast of Mexico, then travels up to the Sonoran Desert to breed in the spring, and can travel as far north as the desert areas of southern Nevada and the southwestern corner of Utah.

Costa’s hummingbirds consume both nectar from flowers and small flying insects. While in the desert, their favorite shrubs to visit are chuparosa and ocotillo. Other nectar producing plants they are known to visit include thornbush, honeysuckle, coral bean, desert lavender, beardtongue, and New Mexico thistle.

Costa’s can be found in three main habitat types, Sonoran Desert scrub, Mohave Desert scrub and California/Mexican coast. They are found in the Sonoran and Mohave Deserts during breeding season, but after the juveniles are old enough to take care of themselves most of the Costa’s leave this area and it’s not very well-known where they go. They may be moving to areas of higher elevation.

In the Mohave Desert they spend their time in woodlands and scrub, especially near streams and springs. Along the California coast they inhabit sage scrub and chaparral, while along the Baja peninsula you can find them among desert scrub and deciduous forests containing tree morning-glory, cardon cacti and elephant tree.

Peak breeding season for the Costa’s is about mid-March to mid-April, but nest construction can start as soon as January. The male establishes a territory with suitable shelter and food sources, and attracts a female through the mating rituals we mentioned above.

The female Costa’s hummingbird is the one to build the nest, while the male protects his territory. In about 5 days, she will create a cup shaped nest of small leaves, bark, lichen and downy plant material held together with spider silk. Nests are about 3-7 feet above the ground in shrubs and trees such as palo verde, cholla, acacia and ironwood.

The nest is just big enough for her to sit in and incubate her 2 eggs for 15-18 days until they hatch. Once hatched, she cares for the babies for about 3 weeks until they leave the nest. By May, most breeding is over.

While Costa’s do migrate, they are still only found in a relatively small area so they are considered to be “short-distance” migrants. They can arrive at their breeding grounds early in December or January, however most will arrive around February. This way nesting can be underway in March and over by May, so they can avoid the desert during the super hot summer months.

It’s less clear where they travel to during the summer, but they likely move to areas of higher elevation / cooler weather. Then in fall a population of them head for northern Mexico to spend the winter.

Costa’s, at the time of writing this article, are not on any population watch list. There has been a slow decline between 1968 and 2015, but the population remains around 3.4 million. Their biggest threat is clearing of the desert scrub habitat for urban development and animal grazing, as well as desert wildfires.

If you happen to live  near the Costa’s habitat, they will visit backyard feeders. However as we mentioned before, they often give way to larger hummers. So if you have multiple species visiting your yard, putting up a few feeders spaced apart can help give the Costa’s more options. They will often choose the “quiet” feeder with less visitors.

1. Costa’s get their name from a French nobleman

The Costa’s was first officially described by Jules Bourcier in 1839. Bourcier chose to name the hummer after his friend, Louis Marie Pantaleon Costa, the Marquis de Beauregard, who was a French statesman, historian an ornithologist. Costa was a well-known collector of hummingbird specimens.

2. Costa’s can travel much further than their typical desert habitat

Costa’s hummingbirds are occasionally found traveling far outside of their typical range. They have been spotted all along western North America, including the Pacific Northwest, Alaska and British Columbia.

3. To conserve energy, Costa’s can enter a torpid state

Nights can actually get quite cold in the desert. In order to save energy, these hummingbirds can enter into a torpor, a state of slowed metabolism like hibernation. While their normal heart rate is about 500 – 900 beats per minute, during torpor the Costa’s heart-rate is able to slow to just 50 times per minute.