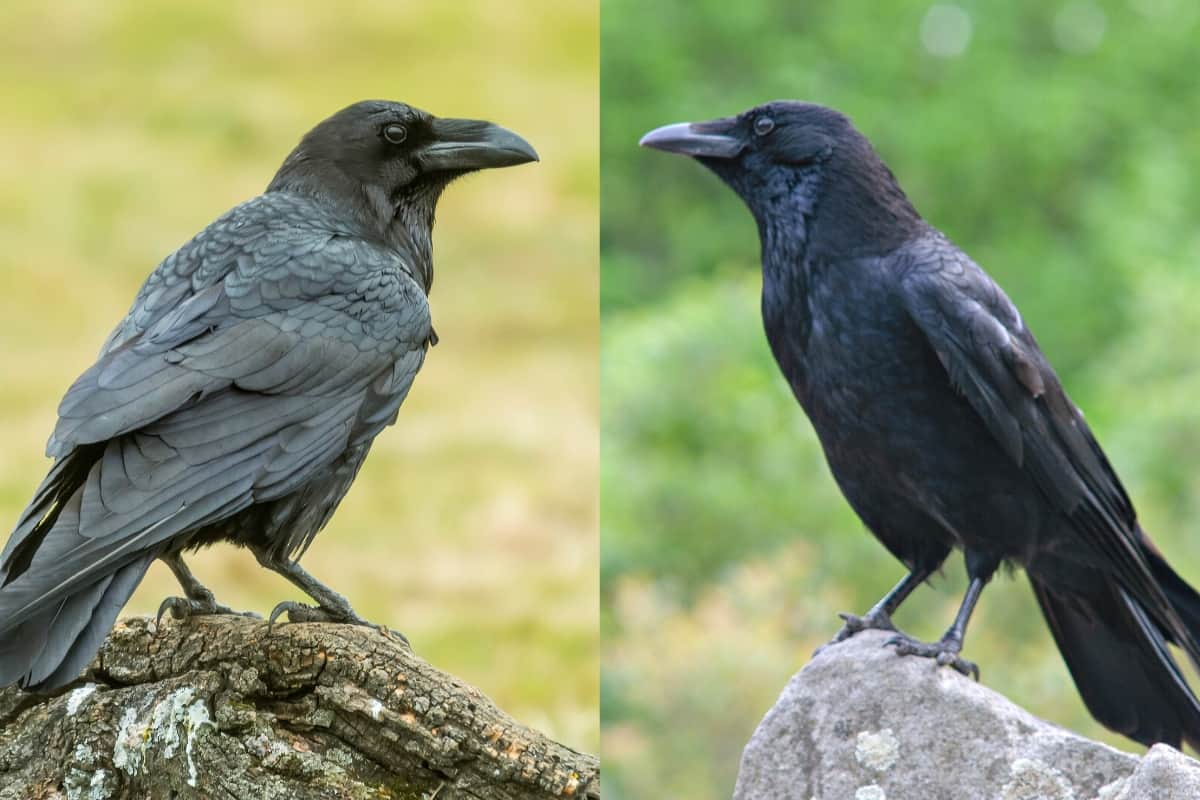 Crows and ravens are two large, black-feathered birds that live in North America. They are often mistaken for one another and people have a hard time telling them apart. While they look alike and have similar behaviors, they are also different in many ways. This article focuses on ten differences between crows and ravens.

We will tell you what to look for to help you with identification, and at the conclusion of the article, you’ll find out more about each species.

10 Differences Between Crows and Ravens

From their social networks to their preferred habitat to diet, crows and ravens have a multitude of differences. This is not an exhaustive list, but the following differences between the two species should provide you with a better understanding of what’s unique about each bird. While there are several species, in this article we are focusing on the American crow and common raven.

1. Crows are smaller than Ravens.

Crows weigh in at about 20 oz., while ravens can weigh over 40 oz. The two species have similar silhouettes from afar, but the raven is bigger and can look much stockier and bulkier. Ravens average 23” long, while crows average just 18” from beak to tail. If you think you are seeing a particularly large and shaggy crow, it’s likely a raven.

The raven’s larger size allows it to travel over longer distances, tear apart prey, and defend itself successfully from predators. Crows are smaller and can fit into crevices and grab food with ease.

The beak of a raven is bigger than a crow, appearing slightly fatter with more of a down-curved upper bill. This larger beak means the raven and break through the skin of carrion where a crow would struggle.

Both crows and ravens have feathers at the top of the beak, but on a raven they are more pronounced and bristly. This goes for the feathers on their neck under their beak as well. Raven’s neck feathers will appear shaggier and longer and crows smoother. Especially when calling, the neck feathers of the raven will puff out.

3. Crows adapt to more habitat types than ravens do.

While both crows and ravens are extremely adaptable species, crows have made more progress in adjusting to a variety of habitat zones throughout North America. They live from coast to coast as well as in central Canada.

Ravens, on the other hand, are more prone to live in mountainous and remote places.

Both species are not disturbed by human development, but crows handle it better. Crows live in almost every major city within their habitat range.

4. Ravens nest on cliffs, while crows nest in trees.

While ravens prefer wilder habitat, especially those with forests, they nest on cliffsides and rocky outcroppings. These are easily found in the west’s canyons, mesas, and mountain ranges.

Crows are less choosy with their nest sites. Both species will nest in human-made structures. Some couples return to the same nest site year after year.

5. Their calls sound quite different.

The typical ‘caw’ of the American Crow is quite different than the rusty squawk of a Common Raven. The crow’s “caw” is clear sounding, and higher in pitch than the raven. Raven’s have a deeper sound, often described as more of a croaking. It can also sound more garbled, almost like they are trying to get a frog out of their throat.

6. They have different tail shapes

Compared to a raven, the crow has a shorter tail. Crow tails are squared off at the end, so in flight when they spread their tail feathers out they will all appear the same length and look like a fan.  Raven’s tails are a wedge shape, so in flight you will see the middle tail feathers are longer than the others.

If you follow a lot of bird content on the internet you may have heard a variation of this joke: ” Crows have five pinion feathers and ravens have four. So the difference between a crow and raven is really a matter of a pinion”. Unfortunately while clever, it is technically wrong. Pinion feathers are the primary flight feathers found at the end of the wing. Both crows and ravens have ten primary feathers. However, there is a bit of truth to be found in this joke.

Crows live in multi-family groups even after they select a mate. Relatives and juveniles help feed chicks and assist parents. You’re likely to see crows hanging out in groups. During the winter they gather in large groups to roost together, sometimes even numbering in the hundreds or thousands.

Ravens are relatively monogamous and form pair bonds with each other. It’s unlikely to see more than two ravens together at a time, and even so, those two are likely a mated pair.

Ravens generally live to be about 15 years old, but crows max out at only 8 or 9 years. Scientists believe crows’ shorter lifespan is due to their small size, which makes them more susceptible to predators.

A crow in captivity once lived to be 59 years old, supporting this theory.

Ravens take advantage of thermal drafts in the wide-open skies. These warm winds allow them to soar on outstretched wings. Crows, on the other hand, must flap their wings more often to keep themselves aloft. Ravens appear graceful, agile and effortless when flying than crows, who look like they need to work a little harder to stay aloft.

Crows have been associated with death and ‘spooky’ occurrences for centuries. A flock of crows is called a ‘murder.’ Don’t worry though! Crows are no scarier than any other bird.

Anywhere that this bird can find food and shelter, it will live. That includes cities, farms, dumps, beaches, and semi-forested land. They prefer to nest in evergreen trees. Unlike ravens, relatives of the nesting couple will occasionally contribute to the nest by bringing supplies to decorate the nest.

The American crow is an omnivore. It eats a wide range of foods, from plant matter like nuts and berries to small rodents and lizards. They will sometimes eat roadkill, but scavenging is not a large part of their diet since their beak is not made for tearing through skin. Some birds living in places near humans will investigate trash and refuse to scout for tasty tidbits.

This bird likes every habitat type except for deserts and can be found throughout the United States, as well as most of Canada during the summer months. They prefer places with existing water supplies and trees to build nests in.

These intelligent birds have been seen utilizing tools, especially sharpened sticks to reach food. They have been known to steal eggs from other birds nests, and will sneakily follow adult birds to find their nests. Groups of crows can work together to steal food from other animals. They also work together to drive away predators like hawks or owls by mobbing them.

Despite their negative publicity from centuries of poems and stories, the Common Raven is a playful and intelligent bird. They often play games with each other. Some populations have even put together cause-and-effect from witnessing kills during hunting season.

Common Ravens like any habitat as long as it isn’t the Great plains or eastern deciduous forests. They live throughout the Southwest, the Northwoods of Canada, the temperate Pacific Coast, the Rocky Mountains, and even the Alaskan tundra.

Scientists call the Common Raven an opportunistic omnivore. This means that they’ll eat pretty much anything they can get their talons on. In the wild, ravens eat rodents, animal carcasses, other birds, eggs, and grain. Unlike crows, their beak is able to break through animal skin, so they are much more likely than crows to eat carrion. They’ll come to a backyard with little prompting, but you might want to think twice, since they’ll scare away other birds.

Unlike crows, ravens live only in the western United States, parts of Appalachia, and Canada. You’re unlikely to spot one in Middle America or the South.

Ravens may gather at food sites such as an animal carcass or landfill, but otherwise they tend to be seen alone or in pairs. They can be quite playful, even when flying by doing rolls and dives, as well as dropping objects and catching them in mid-air. Common ravens nest on cliffs and in trees, as well as in man-made structures like billboards, bridges and utility poles.