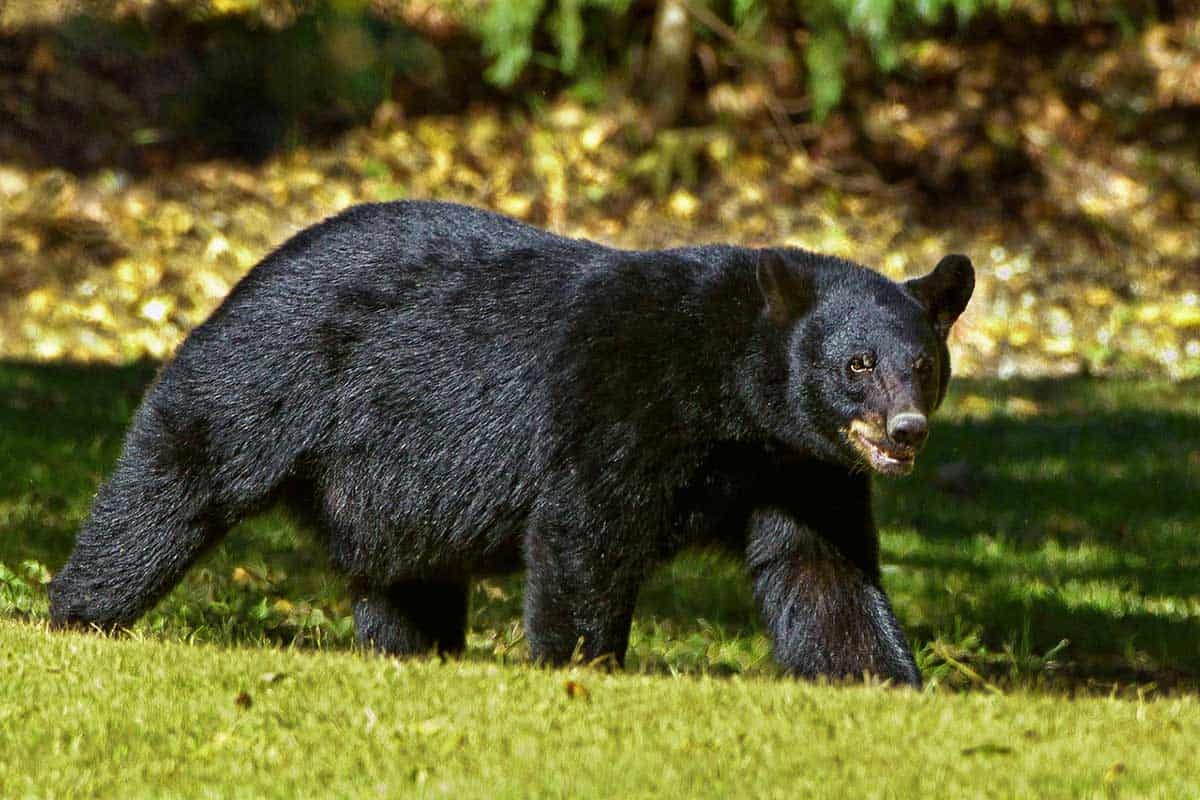 Do you live in bear country? If you do then having bears in your backyard may not be far fetched. Bears are very large mammals that have no natural predators other than man, so they do and take whatever they want.

If something lures them into your yard they are certainly going to poke around and see if there is anything they can eat, because that’s the name of the game isn’t it? Find food.

That brings us to the topic of this article which is “do bird feeders attract bears?”. The short answer is yes, bird feeders can attract bears. Bears are notorious for eating from all bird feeders, including hummingbird feeders. Bears have a highly keen sense of smell and may be attracted to your feeders from far away.

Does that mean you should stop feeding birds and take all feeders down? No, let’s not get carried away just yet. There are however some things you can do to make the bird feeders inaccessible to bears or keep from attracting them altogether.

Ways to keep bears away from bird feeders

1. Get an extra tall pole

Getting a tall bird feeder pole is one possible solution. Just keep in mind that if a 300 pound black bear wants something, it will likely find a way to get it. They are not above knocking your pole to the ground to get to the prize.

If you want to prevent bears knocking the pole to the ground consider a heavy duty pole and set the base in concrete. That one is meant for Purple Martin houses but could work fine as a bird feeder pole with some attachments added to hang the feeders from.

Although probably not the option you want to hear, this one may be the best if you are having bear problems. The Department of Environmental Conservation recommends bringing in all bird feeders between April 1st and November 30th if you are in bear country and having problems.

Maybe rather than bringing in your feeders for 8 solid months you could try bringing them in for a few weeks. Possibly reposition your feeders when you put them back out and work extra hard to keep the ground clean around them.

If you’re lucky maybe the bears that were giving you trouble will have moved on in that time. This isn’t guaranteed to work but may be worth a shot.

4. Bring your feeders in at night only

Black bears are more active at night and commonly forage and search for food from dawn till dusk. This makes your feeders at risk more at night time than in the day, in theory. Bears are getting very used to humans and will enter yards and rummage for food in the middle of the day, which is more dangerous.

You can try bringing your feeders in at night and setting them in your garage, basement or wherever you choose for a couple of weeks and see if this helps. Assuming you are only having bear issues at night.

If bears think that a food source has dried up they may just move on, that’s not to say they won’t circle back to it though!

5. Keep the area around your feeders cleaned up 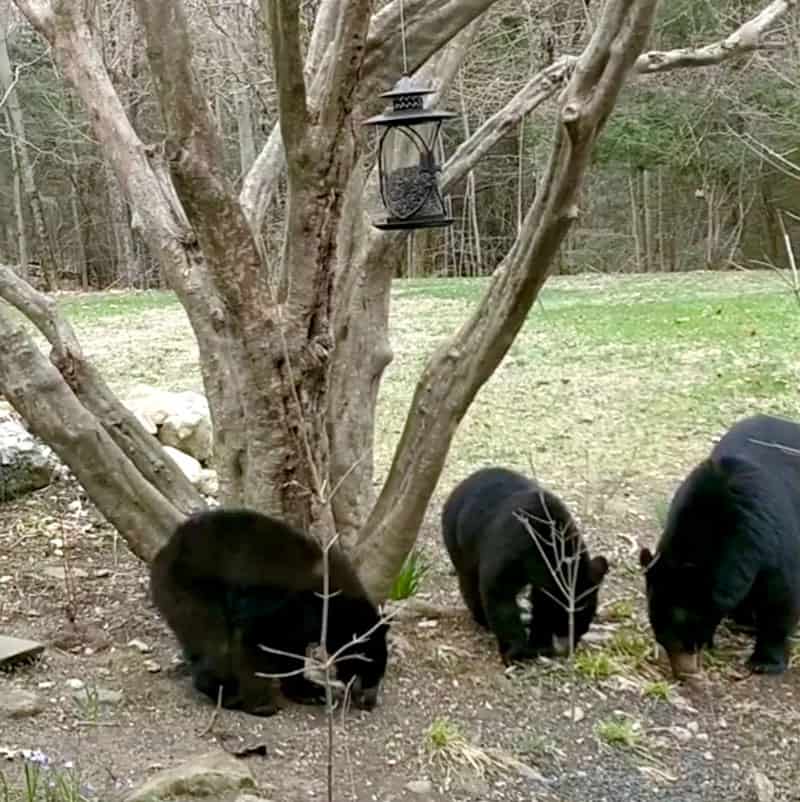 As I mentioned above, bears have an amazing sense of smell and bird seed all over the ground doesn’t help your cause. In fact, a bears nose will put even a bloodhound’s to shame. The average black bear has a sense of smell about 2100 times better than that of a human!

Bears are known for smelling an animal carcass from up to 20 miles away. As far as how far they can smell bird seed or hummingbird nectar I have no idea. I’d imagine if a family of black bears passes near your yard and you have full feeders out and the ground is littered with seeds there’s a good chance they’ll be attracted to them.

6. Mix in pepper with the food as a deterrent

Some people do this and it can work. Bears aren’t especially fond of cayenne pepper and other spicy things. The problem though is that they may not know this until your bird feeder pole is laying on the ground and your new feeder has been ripped to shreds by giant bear claws trying to get to the prize.

However if you want to give this method a try, give Cole’s Flaming Squirrel Seed Sauce a try. You can buy it on Amazon and people have reported that not only is it good for keeping squirrels away from feeders, but bears hate it too.

7. Have a good fence

We all know that bear are excellent climbers, that doesn’t mean we shouldn’t have a good fence in place if we can. Fences are expensive so not everyone can have one but a 6 ft tall wood privacy fence, or even chain link fence, is better than no fence at all!

Bears feel safer under the cover of darkness so a lit yard may be less attractive to them. Having motion detectors for your flood lights is a great idea if you have bears visiting your bird feeders at night. I don’t know personally how effective lights are at deterring bears, but a light turning on would indicate to the bear that someone or something has entered the area and that may be enough for it to move along.

Here are some LED motion activated flood lights you can order from Amazon. You can also try a predator guard LED light like this one that is advertised to deter black bears as well as smaller animals.

This kind of combines motion detector floodlights and super soakers! Suddenly getting sprayed with water while look for any type of food would likely run any type of animal off. Here’s a motion-activated sprinkler you can get on Amazon that is made specifically with animals in mind.

Be sure to store your bird seed properly at all times. Keep all extra bird seed in airtight containers with lids to prevent any smell escaping. On top of that, store it inside your garage or somewhere similar if you can.

11. Change up the offerings

You can try offering types of bird seed that bears aren’t interested in like safflower or nyjer which are less appetizing to bears. This may not attract as many birds, more types of birds will eat black sunflower seeds, but less pests and thieves like them.

A seven pound tube feeder of black oil sunflower seeds has about 12,000 calories in it (source), and bears are known to love them.

12. Consider other things that could be attracting bears

We know that bears can be attracted to bird feeders, but there are many other things that could be attracting bears to your yard and you should consider them as well.

Ways to scare away bears that are in your yard

There are a number of ways to shoo bears away from your property. Most of us probably don’t want to get close to the bears, and for good reason. So what can we do from the safety of our back deck that will scare them off from 20-30 yards away? Here are a few ways to get bears to make their exit, but won’t hurt the bears.

Sometimes water can be used to frighten bears away. Spraying them in the face from a safe distance from something like this super soaker on Amazon, up to 40 ft distance, could prove successful. Especially if the water is mixed with vinegar making it even more unpleasant, but not dangerous, for the bear. Spray him directly in the face then quickly go back inside.

Bears are known for getting spooked by loud noises. You can put some coins in a tin can and shake it around or you can go hard core right off the bat and buy a bear horn like this one found on Amazon. Neither ways are guaranteed to work but are just more ideas to have in your arsenal of bear deterrent methods.

You can try a predator guard LED light like I linked to above in number 8 or even the motion activated flood lights. These let bears know that they are not alone and may be in someone or something else’s territory. Often times bears are still very shy around humans and will avoid them, they are getting bolder though.

This method may cause you to get closer than most would like, but I felt like it needed to be on here. Bear spray is not even as strong as regular pepper spray and meant to frighten bears off only, not hurt them permanently. Spraying a bear with bear spray will not hurt the animal, just get him to run off hopefully.

This EPA certified bear spray on Amazon shoots up to 40 feet for a continuous 8 seconds.

A 32 oz hummingbird feeder full of nectar has around 775 calories, and bears have a sweet tooth. So yes this means your hummingbird feeders may be at risk as well. As you can see from the video above, in the middle of the day as well.

Where is bear country?

Black bears can be found in various places throughout the United States and Canada. There are also small pockets peppered throughout middle America. I’m sure you know if bears are residents where you live, but take a look at the range map above in North America to see where they can be found.

Brown bears can be found in a few areas in the Pacific Northwest but are generally not very common in the U.S.

In the end bears are very large, smart, and rather unpredictable creatures and we don’t always know how to handle them. The best we can do is to very carefully try different methods like some of the ones above to deter them from entering our yards and thus raiding our bird feeders.

If you’ve had any luck with certain methods for getting rid of bears at your feeders please let us know in the comments!