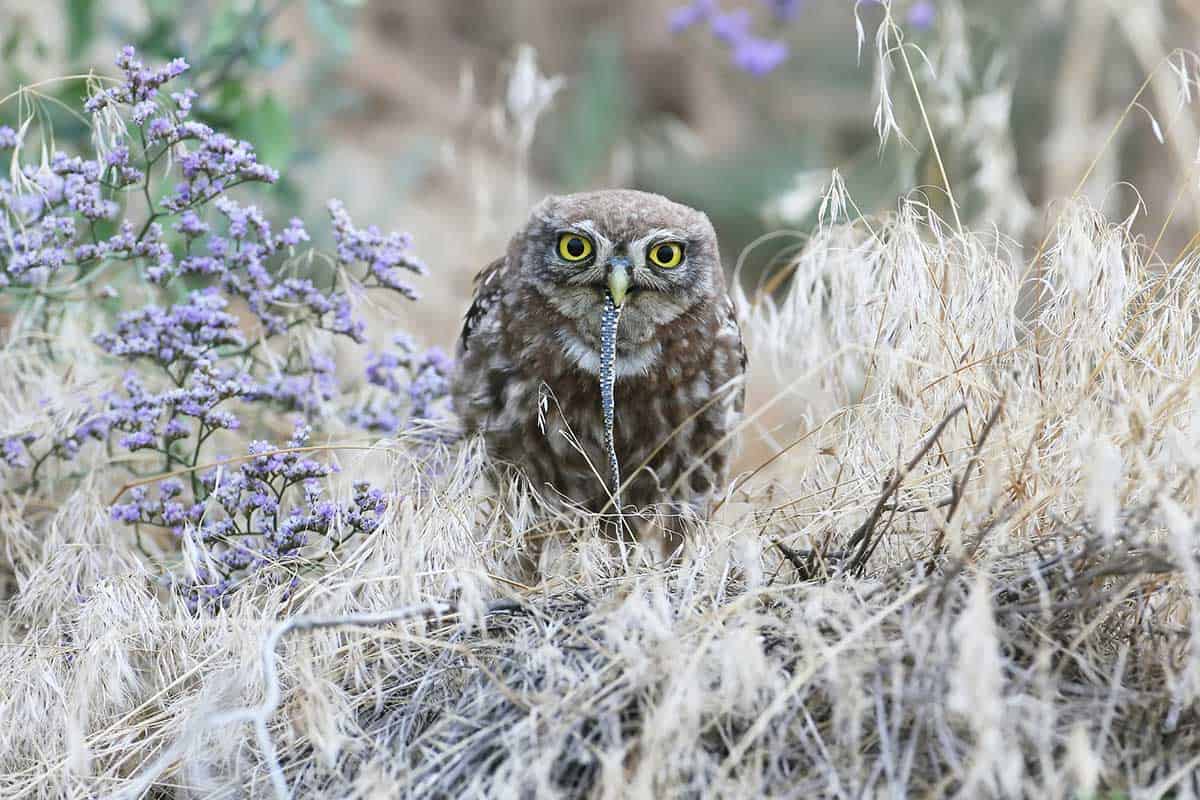 Owls are carnivorous, which means they eat meat. Their main diet consists of a variety of smaller animals, such as insects, mice, shrews, lizards, and some birds. However,  owls are described as being ‘opportunistic’ in their hunting, which means they will pretty much eat whatever they find. Including snakes.

The easy answer to the question of owls eating snakes is ‘yes, they do’. However, not all owls eat snakes and no owl survives only on snakes. At best, snakes form a part of the diet of some owls.

How do owls attack snakes?

Owls have fantastic eyesight and can see any animal, including snakes, from far away and in just about any light, because of their big eyes. Mostly, they swoop down on the animal and grab it in their claws. This means that the animal must be in at least a slightly open space.

Many snakes live in trees, where they are camouflaged and can hide between the leaves and branches. This means that owls will not catch a snake in a tree. They will go after them when they are out in the open, on the grass, or even on the water.

Snakes often bask in the sun, which makes them good targets for owls.

5 examples of owls that eat snakes

You may think that it is the bigger species of owl that eat snakes, but there are also some smaller owls that will take on a snake.

Barn owls are an example of an owl that will eat snakes opportunistically, not regularly. Their main diet consists of smaller animals, particularly rodents (like mice and rats), lizards, some smaller birds, and frogs. They will eat a snake if they come across it and are hungry. It also depends on where the snake is.

Barred owls are medium-sized birds and can eat a variety of sizes of animals. Part of their prey is snakes, which it catches by swooping down and grabbing them in its claws. The barred owl eats rat snakes and common garter snakes, amongst others.

The great horned owl is a big owl and can catch some larger prey. It will still go after small mice and snakes but is also easily capable of catching bigger and longer prey. A great horned owl can attack and kill a gopher snake, which grows up to 7 feet (2 m). When the owl’s talons are gripping its prey, they exert a very strong force that a snake cannot break. If, however, the snake is not caught and killed quickly, it can fight back.

As you can tell from the name, Pel’s fishing owl eats fish, which it snatches from the water in mid-flight. At times, if the owl spots a water snake, it may also swoop down and grab it. This will only happen occasionally, though.

What happens if an owl doesn’t kill the snake?

Any animal that can attack another means it is a threat. Snakes are not passive prey for owls, they can fight back by striking an owl with venom, or by constricting them.

Because owls attack quickly and from above, it’s very unlikely that a snake will be able to attack back. However, if an owl goes for a bigger snake, then it may end up wrestling with it on the ground because it can’t fly away easily. In this case, the snake may fight back by biting the owl or even getting around it and constricting it.

If an owl takes a snake into its nest and does not kill it, the snake may attack the eggs or chicks and kill them.

Sometimes, though, an owl may take a live snake to their nest on purpose, because they know the snake can actually help them.

The Eastern Screech Owl is an owl that specifically takes a snake into its nest because it can be useful. This is not any snake but is a type of snake that is blind and really looks like a worm.

Being blind does not stop snakes from sensing other creatures. These worm-like snakes burrow into the bottom of the screech owl’s nest and feed on insect larvae they find there. This stops the insects from becoming a parasite and affecting the eggs and chicks.

So, the screech owl knows how to use a snake to help its family, without killing and eating it.

There you have it: Owls do eat snakes. Not all species do and no species eats only snakes. Owls will eat whatever they find, so if they see a snake out in the open and it is a size they can manage, they will swoop down and grab it with their talons. Any food is good food, after all.