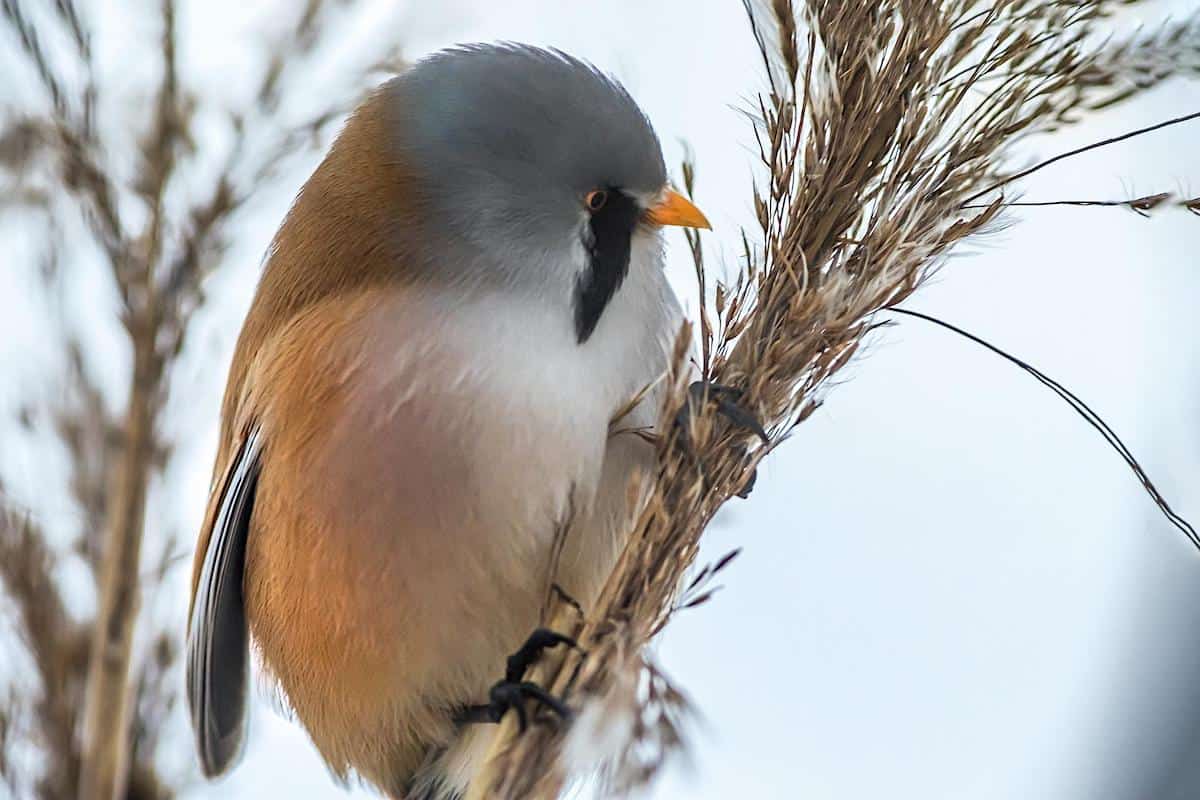 If you live in North America, you may not have heard of the Bearded Reedling. This small wetland bird has a cute and unique appearance. In this article we will look at some fun facts about Bearded Reedlings, including where in the world you can find them and how they thrive in their specialized habitat.

1. Members of the Panuridae Family

The Bearded Reedling is a unique bird, so much so that scientists historically weren’t sure what family of birds it should be a member of. It was moved around until finally it was decided that they just aren’t closely related to any living species and should get their very own group!

So they are currently the only member of the Panuridae family, and their full scientific name is Panurus biarmicus.

2. Bearded Reedlings have many nicknames

Bearded Reedlings are also known by a few nicknames. They are commonly called “bearded parrot bills” and “bearded tits”. Due to similarities in their appearance, these birds were formerly thought to be members of the tit or parrot bill families.

Even though we know now that they are not related to those other bird families, the nicknames persist.

Bearded Reedlings thrive in wetlands near freshwater or brackish water. As such you can find them in wet reedy areas next to marshes, swamps, lakes and rivers. Just as the name suggests, these birds prefer to nest in reed beds. They will establish entire colonies in reed beds that run along swamps and lakes.

4. They Do The Splits

Bearded Reedlings are known to do the splits between reeds. By grasping a separate reed with each foot, they can brace themselves in this split-stance to perch, reach food, or just help them maneuver around the thick reeds.

This stance is one of the most recognizable traits of the Bearded Reedling, and they look awful cute doing it!

One way these birds are able to manuver well among tightly packed reed beds is their small size. They can fit right in the palm of your hand as both juveniles and adults.

6. They Are Sexually Dimorphic

While females have a pale brown head, males are more striking with a gray head, bright yellow beak and two long black “moustache” marks that extend down from each eye.

Unlike many bird species, Bearded Reedlings don’t typically migrate. They can be found distributed across areas of the U.K., Europe and Asia and will remain year-round residents in their local range.

The exception to this is they may travel to escape unusually cold winter weather. Extremely harsh cold weather can be potentially deadly to these small birds.

8. They eat more than just seeds

When you look at the name, it seems obvious that Bearded Reedlings would consume reed seeds. Seeds from reeds and other marsh grasses do make up part of their diet, and they often perch right on the reed stalk to eat the seeds while still on the plant.

However that is not the only thing they eat. Especially during the summer months, they eat a lot of insects including mayflies, mosquitos, midges, spiders and slugs.

They will forage around the edges of open water, in muddy grounds, and wetlands to find the food they need. Larvae and pupa of these aquatic insects are also on the menu.

Both sexes will participate in nest building. Their cup-shaped nests are constructed of dead reeds and leaves from other wetland plants.

The inside of the nest will be lined with soft material such as feathers, flower heads and sometimes animal hair. Nests are hidden among dense reeds and often under sheltering vegetation that provides a bit of a “roof”.

10. Both sexes incubate the eggs

A true team, both males and females will take turns incubating the eggs for about 10-14 days before they hatch. Both parents also work together to take care of and feed the hatchlings, which take about 2 weeks to grow large enough to leave the nest.