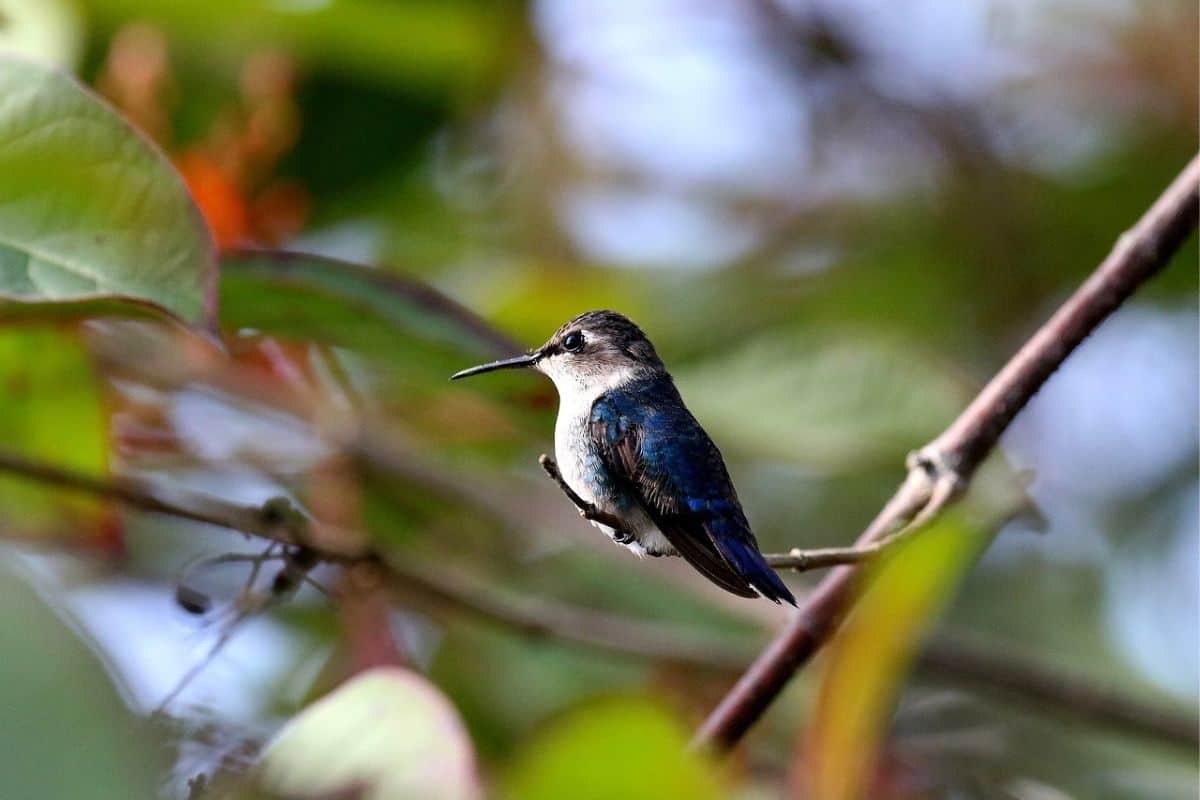 Often mistaken for bees, the bee hummingbird is a miniature bird that takes the title of the world’s smallest bird. They have stunning colors and can only be found in one country. Read on to find out where you can see these birds in the wild, their favorite nectar flower, and more with these 20 fun facts about bee hummingbirds.

These birds measure only 2.25 inches long and weigh less than 2 grams (or less than a dime). This gives them the well-earned title of the world’s smallest bird. They are miniature birds even when compared to other hummingbirds and are typically more rounded and plump than the common slender shape of other hummingbird species.

Male bee hummingbirds are more colorful, with a turquoise back, and an iridescent rosey-red head. Their red feathers extend down their throat and trail off on either side. Females also have turquoise upper parts but lack the colorful head. They instead have a white throat and pale gray on the top of their head.

These birds live very solitary lives outside of the breeding season. Males are also very territorial in the area they established, including aggressively chasing away other nectar-feeding animals like moths, bees, and birds.

If you hear a bee hummingbird in the wild, it will be various high-pitched, simple songs consisting of a repeated single note. Their sounds include twittering and squeaking.

Unlike some birds that mate for life, these birds don’t form pairs. During the breeding season, a single male can mate with more than one female and the female is usually in charge of building the nest and caring for the eggs. Bee hummingbirds typically breed between March and June.

These tiny birds lay their eggs in cup-shaped nests that are about the size of a quarter. They make their nests from bits of bark, cobwebs, and lichen. The eggs are no bigger than peas, and females typically lay 2 eggs, which she incubates for about 21 to 22 days.

Males will sometimes ditch their solitary lives to form small singing groups with other males. They will perform aerial dives to impress females, as well as flash their colorful face feathers in her direction. During dives, they create sounds from the air fluttering through their tail feathers. These sounds are also thought to be part of the courtship ritual.

After hatching, the teeny tiny baby bee hummingbirds will double their size in just four days. After three weeks, they will be ready to leave the nest.

9. The bee hummingbird’s favorite flower is the chalice vine

Their favorite nectar source is the large ornamental flowers of the chalice vine (Solandra grandiflora). However, you’ll also see them feeding on other tubular, and horizontally positioned flowers, such as flowers from the mallows family or the cigar plant.

10. You can only find bee hummingbirds in Cuba

Native and exclusive to Cuba and the surrounding islands, the bee hummingbird prefers sub-tropical, lowland habitats. While they’re mostly in coastal forests and forest edges, they also live in mountain valleys, gardens, and swamplands. You’ll find them perched on exposed branches or hovering over woodland flowers.

Being the world’s smallest bird also means they are vulnerable to numerous predators. Bee hummingbirds need to watch out for mongoose, larger birds, bees, wasps, spiders, fish, and frogs.

12. Bee hummingbirds are classified as near threatened

Besides their numerous predators, human activity has had a big impact on their numbers. Deforestation, or the cutting down of large forested areas, has ruined their preferred forest habitats making it harder for them to feed.

Not only are bee hummingbirds so small they can be mistaken as bees, but their wings move so quickly that they also make a buzzing sound resembling a bee.

15. Male bee hummingbird’s wings can beat up to 200 times per second

Regularly, the tiny wings of the bee hummingbird will beat around 80 times a second when flying. However, this number increases significantly to up to 200 times a second for males during a courtship flight!

A benefit of their fast-beating wings is the bee hummingbird can reach speeds of 25 to 30 miles per hour. They can also fly backward, up, down, and even upside down. However, these fast flyers aren’t migratory and stick to the areas of Cuba.

Relative to body mass, the bee hummingbird has the highest metabolic rate of any animal worldwide. Every single day, they can burn around 10 times the energy of a marathon runner.

17. Bee hummingbirds have the second-fastest heartbeat

After the Asian shrew, bee hummingbirds have the second-fastest heartbeat in the animal kingdom. Their heartbeats can reach up to 1,260 beats per minute. That’s over 1,000 more beats than the average human. These birds can also breathe around 250 to 400 breaths per minute.

18. Bee hummingbirds spend up to 15% of their time eating

With all the energy they burn, bee hummingbirds are also tireless eaters. Every day they will visit up to 1,500 flowers for nectar. They will also sometimes eat insects and spiders.

19. Bee hummingbirds can fly up to 20 hours without stopping

These tiny birds have the endurance to also match their feeding habits. They can fly up to 20 hours without a break, which comes in handy when feeding. Instead of landing on the flower, they will feed while hovering in the air.

Considering the number of flowers they visit, bee hummingbirds play an essential role in plant reproduction. They pick up pollen on their head and beak when feeding and transfer the pollen as they fly to new destinations.

Incredibly small, fast, and high-energy, the bee hummingbird is a fascinating species native to Cuba. They are important pollinators that deserve to be protected to hold their title of the world’s smallest bird.