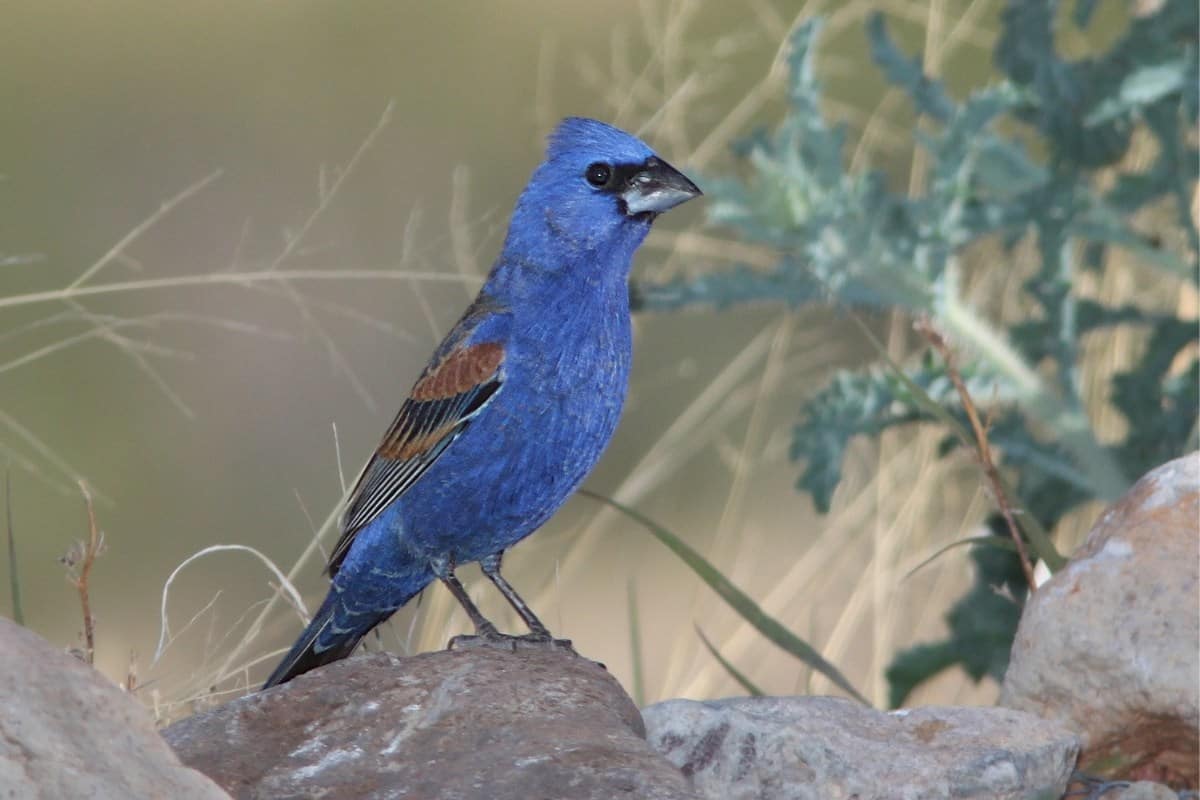 Blue Grosbeaks are some of the most vibrantly colored finches. Their strong beaks enable them to open even the hardest of seeds, and the male’s bright blue color helps him stand out to females and intimidate his territorial opponents. Common in the southern United States during the spring and summer months, this bright blue songbird is a treat to see. Keep reading to learn 11 facts about Blue Grosbeaks, and what makes them special!

The Lazuli Bunting is another seed-eating finch that lives in the United States. According to genetic testing, it is thought to be the closest relative of the Blue Grosbeak.

You’re not likely to see them together because their ranges rarely overlap. While the Blue Grosbeak is found in the south, the Lazuli Bunting takes over in the west. However, both buntings are a bright blue color, a unique trait that is rare in the animal kingdom.

This coloring sets them apart from other songbirds.

Only the male Blue Grosbeak is the bright lapis-lazuli blue. Females do have a hint of dusky blue feathers, but they are mostly a cinnamon brown with dusky gray wings.

Males, on the other hand, are a deep blue all over. They have two chestnut brown wing bars, dark wings and a dark tail. There is a small black mask of feathers around their beak.

3. In the United States, Blue Grosbeaks are easier to find in the late summer.

Blue Grosbeaks are migratory birds. They divide their time between Central America, the Carribean, and southern Mexico in the winter, with northern Mexico and the southern half of the United States during the summer. This pattern is common among many songbirds. What isn’t so common, however, is their timing.

These bright blue songbirds migrate back to the United States later than their counterparts. This means you might hear a male Blue Grosbeak singing well into July, long after other shrub-native songbirds have stopped calling.

Blue Grosbeaks are speedy and efficient nesters. Even though their breeding season starts late in the summer rather than early spring, they can still raise two broods of nestlings before heading south. Scientists believe that these songbirds are monogamous.

They work together to maintain their territory. A single mated pair can defend a territory that is as large as 20 acres!

5. You can spot them in most of the southern United States and Central America.

While they love to hide in bushes and scrub, Blue Grosbeaks can be found throughout the open woodlands of the southern United States. Here, they spend the late spring and summer months, breeding, nesting, and raising their chicks. When the weather turns cold, they migrate south.

Fall and winter are spent in Mexico, Central America, and some Caribbean Islands. They’re common in Cuba, the Dominican Republic, and Haiti, among other islands.

Their favorite foods are the ‘crunchy’ invertebrates, such as grasshoppers and crickets. Beetles, caterpillars, cicadas and other insects are also included. They hunt in multiple ways. Some creep along a branch and others retrieve insects they spot while perching. Others forage on the ground.

They also eat seeds from grasses and wild grains, which are often found along the edges of the forest habitats they love. This includes wheat, oats, alfalfa and corn.

7. Female Blue Grosbeaks build their nests out of many different materials.

The female Blue Grosbeak builds her nest out of anything she can get her beak on. Thanks to human influence, that sometimes includes bits of string, newspaper, and cellophane, along with the more natural building materials of bark, twigs, pieces of roots, dead leaves, and grasses.

She locates her nest low in tangled thickets of vegetation that are secluded but close enough to open areas that bringing food back to her nestlings won’t be too long of a trip.

Unfortunately, Blue Grosbeaks are often victims of nest parasitism. This practice is when a bird lays her egg in the nest of a different species. Cowbirds are the usual culprit. The interloping egg is usually larger than the others. It hatches early, then pushes the other eggs out the nest.

High rates of nest parasitism may be one reason that Blue Grosbeaks have more than one brood per year. It may help compensate for the chicks lost to interlopers.

During the breeding season, Blue Grosbeaks prefer to stake territory and nest in areas with fewer humans. Some man-made areas have worked out in their favor though, such as power cuts and fallow agricultural fields. These songbirds thrive in the margin between forest and open shrubbery.

However, not all developmental projects are beneficial. It’s not understood completely, but Blue Grosbeaks tend to avoid suburban areas and backyards that other finches are completely fine with.

If you have a very large backyard, they may visit the edges if it’s far from human activity. Some pairs have been open to bluebird nesting boxes as well.

10. Males perch on fenceposts and wires to sing their songs in the morning hours.

Blue Grosbeaks males can be spotted easily within their habitat because they have a tendency to sing in obvious and easy-to-spot places. They are especially easy to find in late summer since many males of other songbird species are done displaying and singing by then.

If you are near a fence line or telephone pole within their habitat, keep an eye out for this songbird.

These colorful finches are certainly long-lived. Populations are also expanding northward as forest clearing continues. If you are lucky enough to spot a Blue Grosbeak year after year, chances are it might be the same one.

They are adapting to changes in climate in a positive way. While some of their southernmost range could disappear in the next century, they would maintain nearly 90% of their range and gain 15% more.