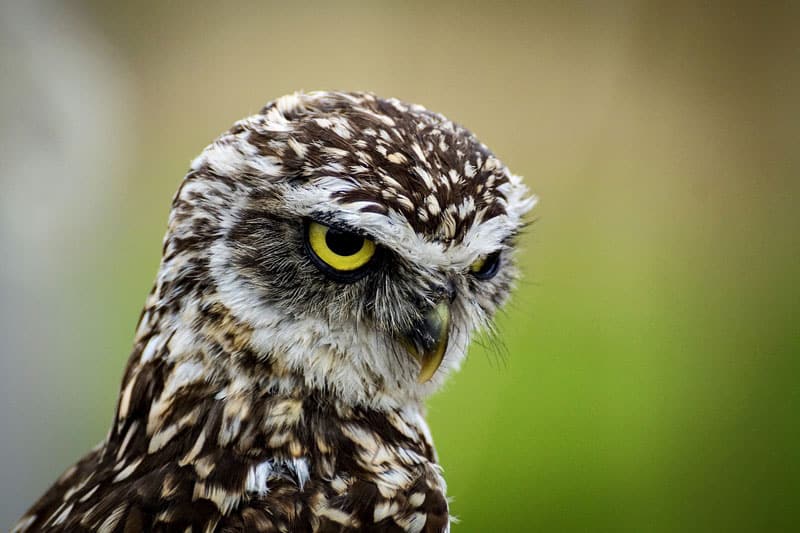 Owls have been regarded as symbols of wisdom, intuition, and the supernatural throughout history – most likely due to their graceful, silent flight, mysterious nocturnal activity, and seemingly all-knowing eyes.

However, there’s a whole world of owls out there that are different than what we see in the movies.

Take for instance the Burrowing owl. Here’s an owl that doesn’t exactly fit in with the stereotypical Snowy Owl from Harry Potter or the Great Horned Owl, and that’s exactly why they deserve some attention! Below are some interesting facts about Burrowing Owls we thought were pretty cool.

1. Burrowing owls are some of the smallest owls around. While the European Eagle owl is the largest owl species with an average weight of 3-8 pounds and a wingspan of more than 5 feet, the Burrowing owl weighs on average only 4-7 ounces with a wingspan around 2 feet.

2. Unlike the Great Horned owl, these owls lack ear tufts, giving their heads a somewhat comical, round appearance.

3. They have short square tails and long, thin legs that come in handy for running on the ground.

4. Their heads, backs, and chests are brown with white spotting and their bellies are white. Females may have more pronounced spotting than males.

5. They also have a long white eyebrow that runs across their faces.

6. With most owl species, the female is noticeably larger than the male. However, with Burrowing owls, males and females are the same size, with the males sometimes being slightly larger.

7. The Burrowing owl gets its name from where it lives – in underground burrows.

8. These burrows are sometimes dug by the owls, but more often than not the owls will take over burrows built by other creatures such as prairie dogs, badgers, ground squirrels, and even tortoises.

9. Burrowing owls are found in dry prairies, grasslands, pastures, and deserts throughout North and Central America.

10. The underground burrows will help regulate temperatures and keep the owls from becoming dehydrated during hot weather.

11. Owls will often line their burrows with manure in order to attract insects such as dung beetles, one of the owls’ favorite foods. It is thought that the smell of the manure also masks the owls’ scent, helping them stay safe from predators.

12. During nesting, owls sometimes pick up human litter such as cigarette butts, bottle caps, plastics, and other bits of trash to line their burrows with. It is thought they perhaps do this to alert others that their burrow is occupied.

13. Because they spend so much time underground and due to the lack of fresh air flow through their burrows, they’ve developed a higher resistance to carbon dioxide. This adaptation allows them to survive in conditions with stuffy air quality and not a lot of fresh oxygen. 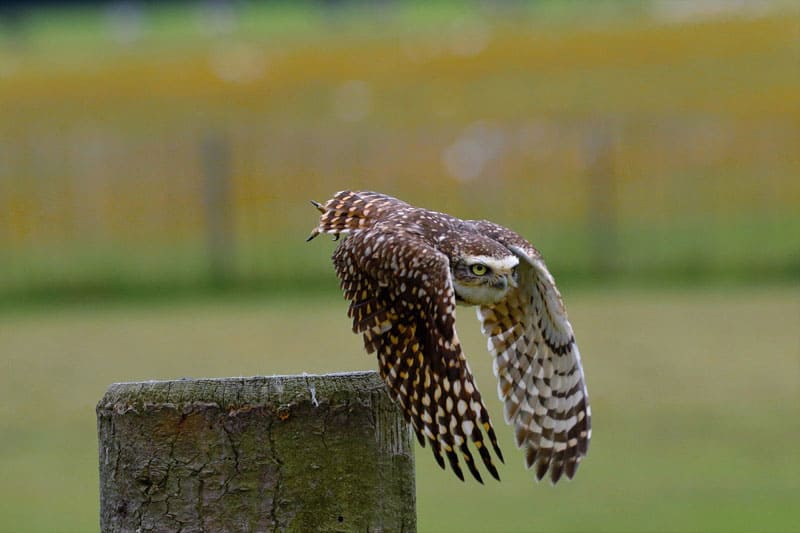 14. While other owls hunt at night, Burrowing owls mostly hunt during the day – catching prey which includes insects, small mammals, and sometimes reptiles and amphibians.

16. To catch prey, owls use their long legs to walk or run across the ground. However, they’ll sometimes hover the ground looking for prey and catch insects in the air.

17. Females catch the majority of insects during the day while males catch mostly small mammals and other vertebrates at night.

18. Owls will store food in their burrows to have an ample supply in case of shortages or bad luck hunting, especially during nesting season 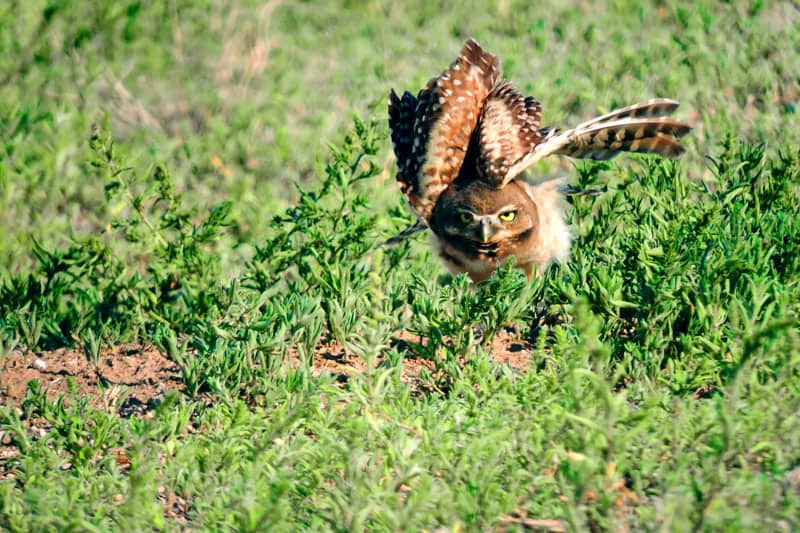 19. Cowboys were known to refer to these owls as “howdy birds,” or “howdy owls” due to the way they stick their heads out from their burrow entrances and nod up and down. However, although humans tend to find this behavior cute and funny, it’s actually a sign of distress in regards to a predator or other threat.

20. Burrowing owls are pretty animated performers during rain showers. It’s been reported that these owls get so excited when it rains that they’ve been reported to run around and flap their wings, stretch, and shake their feathers.

21. When an owl is in distress it makes a call mimicking that of a rattlesnake to scare away predators. This works especially well when they are hidden in their burrows since the predator doesn’t know if there’s a rattlesnake waiting inside.

22. Instead of flying away like other birds when they are disturbed, they often run away or flatten themselves along the ground.

23. Owls tend to live for about 7-8 years in the wild and around 12 years in captivity.

24. Owls will perform a courtship ritual that involves flying up in the air, circling or hovering, and then quickly descending. This may even be done multiple times.

25. Mating pairs take care of each other. Males may deliver food to the females and both members groom and preen each other as well as rub beaks together.

27. Parents take turns incubating the eggs, which take about 4 weeks to hatch. They then take turns taking care of the owlets until they fledge (when they develop feathers for flight).

28. When owlets are born they’re covered with soft, light brown downy feathers and are completely helpless.

29. When owls nest they often form loose colonies with many surrounding burrows. It is thought that the extra burrows provide the young owls with multiple escape options if there’s danger nearby. 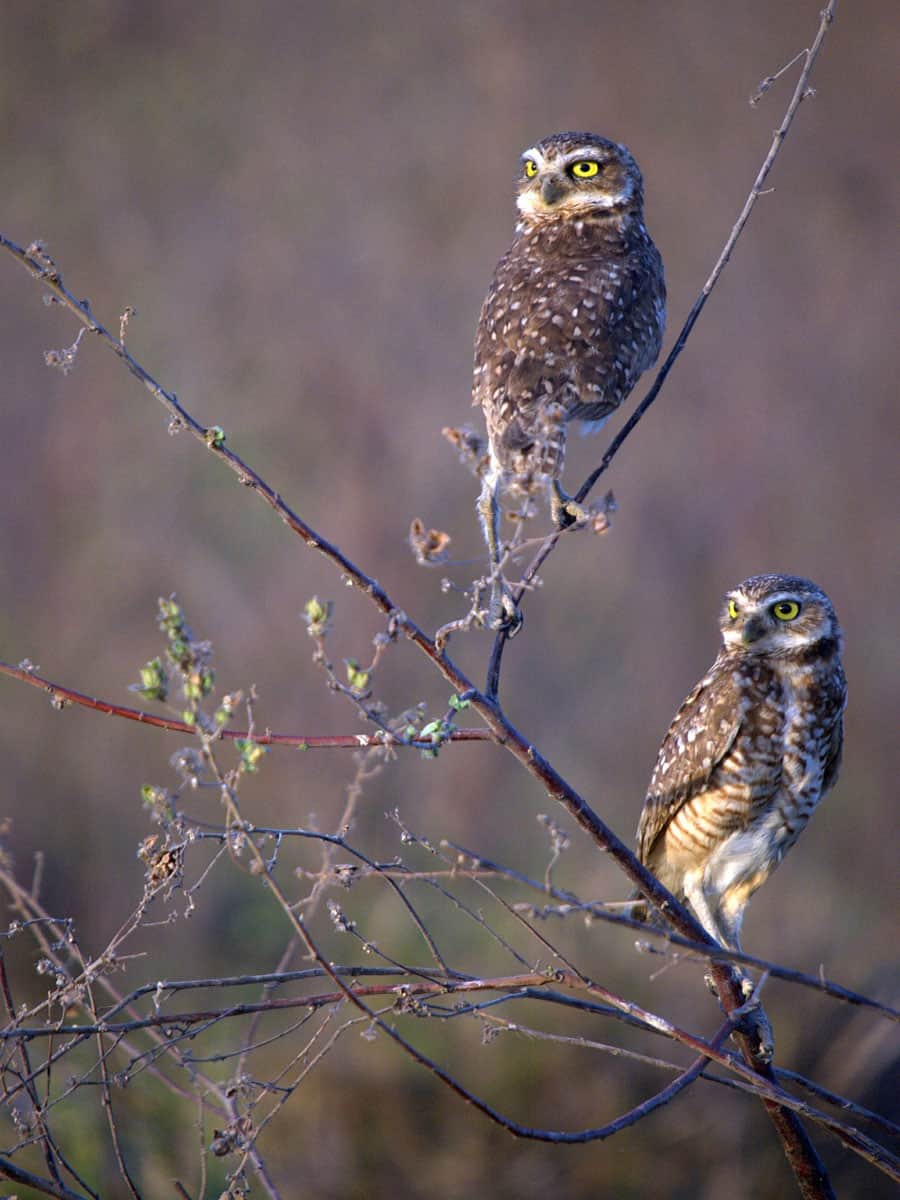 30. The conservation status of Burrowing owls is mixed. They’re of conservation concern in Canada and Mexico and listed as endangered in some U.S. States. However, they are listed as least concerned in other areas.

31. Regardless of their status, it has been reported that their populations have declined over the years.

32. Threats to these owls include pesticide use, land development, car collisions, and farming practices.

33. Natural predators include domestic and feral cats, badgers, weasels, hawks, and other birds of prey.