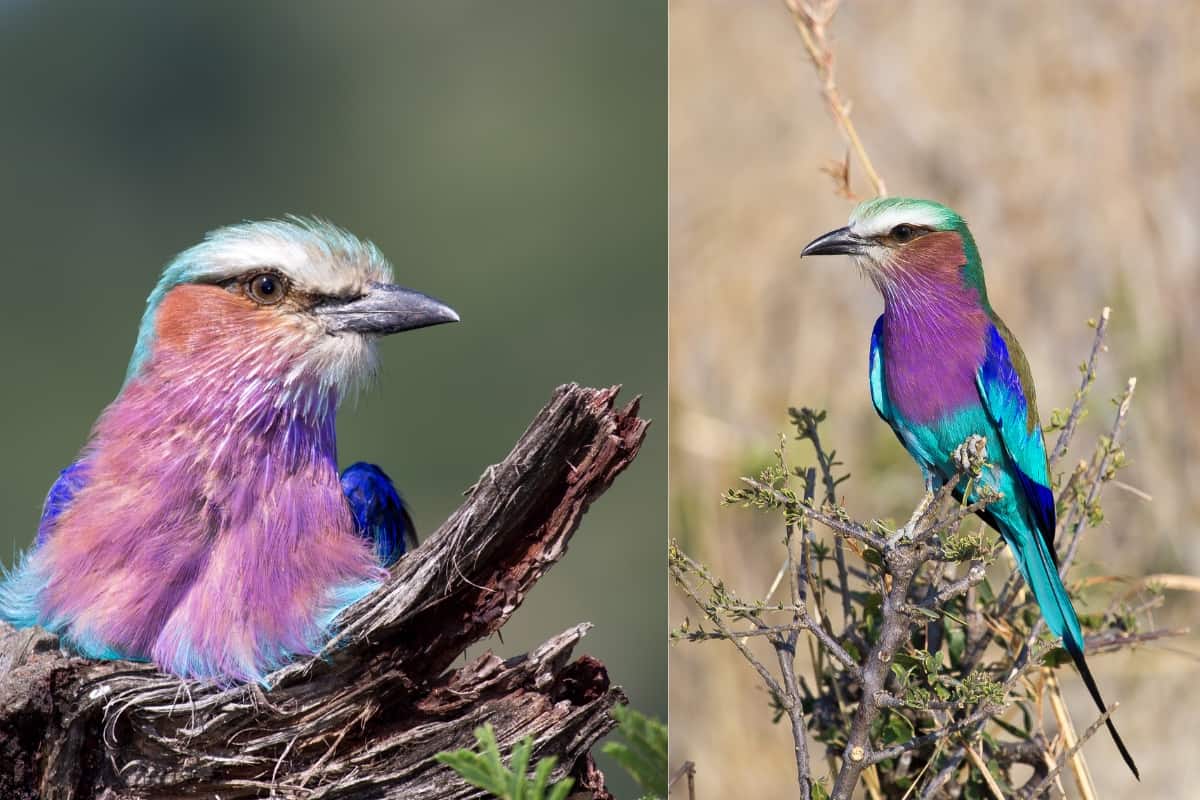 Lilac-breasted rollers are a feast for the eyes. Their blue, purple, and turquoise plumage stand out against grasslands and open woodlands. These exotic birds are skilled hunters, with arial acrobatics that keep birdwatchers entertained. Let’s learn 14 facts about Lilac-breasted rollers!

You won’t see a Lilac-breasted roller in North America. Their range is limited to the continent of Africa. They are year-round residents of open woodlands south of the Saharan Desert.

While they don’t migrate, they generally move around in their range according to the rainy and dry seasons.

The only way to tell males and females apart is via size. Males are a bit larger than females. Otherwise, both sexes look exactly the same.

They have a bright purple throat, olive crown, and turquoise abdomen. Their wings can be olive tinged with brown. They have tail streamers that fly behind them when they soar through the air.

In the wild, Lilac-breasted rollers live around ten years. Animals which pose a threat to them include hawks and falcons. One such falcon is the peregrine falcon.

In situations where they are kept captive and away from threats, they can live for several more years.

4. They are ambush predators.

Many carnivorous birds perch where they have a vantage point to watch for prey. The Lilac-breasted roller is no different.

They perch on a fence post, tree branch, or the top of a snag and looks out over their territory. When they see an exposed grasshopper or beetle, they dive down and snag it with their beak.

If the prey is large enough to fight back, some birds beat their quarry against the ground to kill it before they swallow it whole.

5. They get their name from their purple feathers and aerial acrobatics.

The name of this bird has two parts. First, “lilac-breasted” refers to their bright purple breast.

Second, the word ‘roller’ is a reference to the way these birds fly. They fold in their wings when they dive, rolling through the air like vibrant torpedoes.

6. Lilac-breasted rollers are extremely protective of their young.

Lilac-breasted rollers are some of the most territorial medium-sized birds in the African Savanna. They take on predators much larger than they are. These include hawks and falcons, which usually want to snag chicks.

Mated pairs work together to patrol their territory and fight off any intruders, whether they be other lilac-breasted rollers or hungry predators.

7. The male performs stunts to impress the female.

Lilac-breasted rollers are monogamous. In order to win his mate, the male displays and performs acrobatic stunts to impress the female.

He flies to a height of at least 225 feet, then descends while calling loudly. His descent is not one fluid motion. Instead, it is a series of swooping loops and dives.

When the male finishes diving, he lands next to the female in a high perch. If she is receptive, they perform a mating dance together. They call at the same time while pointing their heads to the sky and gesturing down to the ground.

Kenyans value this colorful bird so much that they gave it special status as the nation’s national bird.

Kenya is in the northeastern region of the Lilac-breasted roller’s range. While you’re unlikely to see a bird within Nairobi, they are plentiful in rural areas outside the city.

Look for them too in conservation areas. They are more brazen and less afraid of humans here. Some approach roadsides to sit on power lines.

9. They live in open woodlands and the African savanna.

Lilac-breasted rollers are birds of open spaces. Their prey crawls, creeps, or flies over open ground in the savanna and grassy woodlands common in sub-Saharan Africa.

Even though they prefer open landscapes, they use trees for perching and nesting purposes. Some birds will nest in the tree trunk cavities left by woodpeckers and kingfishers.

They are found in some agricultural areas. Many congregate there during burnings when insects, mice, and lizards flee from the fires. Lilac-breasted rollers take advantage of the unusual bounty and catch them unawares.

11. Some nest in cavities within termite mounds.

The Lilac-breasted rollers that choose not to use trees for nesting, will often use termite mounds. They don’t excavate their own cavities; instead, they reuse other birds’ old nests.

Termite mound cavities can be made by woodpeckers and other cavity nesting birds. It usually happens when there are not enough mature trees in a habitat to support a hollow nest in the trunk.

12. They eat insects, small vertebrates, and even other birds.

Lilac-breasted rollers search for prey from a perch. They watch the ground for insects, lizards, and small mice. Their favorite foods are grasshoppers and beetles.

To catch their quarry, the birds perch in wait from a high vantage point. They watch for their prey, wait for an opening, and dive quickly to snag it before it takes another step.

13. Parents raise their chicks together.

These colorful birds are usually solitary, but they pair up during breeding season to raise their young together. They raise between 2 and 4 chicks per year, which they incubate together.

The chicks are helpless when they hatch, and it takes 19 days for them to go from hatchling to fledgling. Parents

The lilac-breasted roller’s call sounds like a harsh, raspy “kaaa.” Birds use this call to communicate with one another, especially between mates or when a parent calls to its chicks.

They are extremely vocal when defending their territory and will repeat the call at louder volumes to scare away threats. Males engage in arial combat over territory. They claw each other and beat their wings in midair.