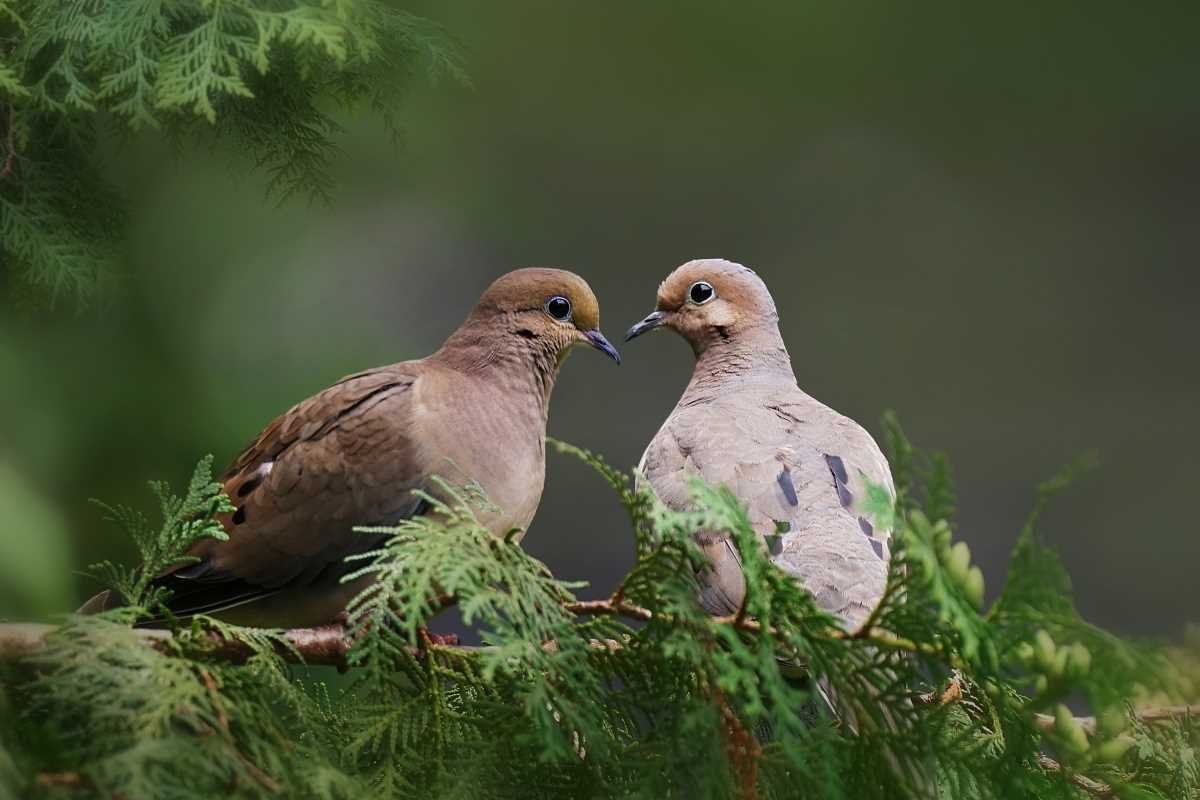 Mourning doves are birds that come from the dove family, and they are one of the most common kind of birds you might come across in America. Their soft, mournful call is easily recognizable. They are also common in urban and suburban neighborhoods across North America. Let’s look at some facts about mourning doves and learn more about these peaceful birds.

1. They are found throughout North America

In the United States, Mourning Doves can be found throughout the whole country year-round. They are also year-round residents in the Caribbean and parts of Mexico. A population spreads into lower Canada during the summer, and Central America during the winter.

2. They are a popularly hunted bird

Mourning doves are one of the most commonly hunted birds in the country. About 20 million are harvested each year, out of the annual population estimated around 350 million. This may be surprising since they don’t quite seem to fit in with game birds such as grouse, quails or pheasants.

However people find them abundant, fun to hunt, and good to eat. Because Mourning Doves are technically classified as a migratory bird, and therefore protected by the Migratory Bird Treaty Act, special certifications and licenses are required to hunt them.

One of the reasons these birds are so common is that they tend to like the same habitat that we do. They prefer open and semi-open land to anything heavily forested. This includes parks, neighborhoods, farms, grasslands and open woods. This brings us to the next fact…

Today, Mourning Doves can be found breeding in each of the 50 United States, even Hawaii and Alaska. Not many other bird species, if any at all, can make the same claim.

Interestingly, when the first European settlers came over from Europe, these birds were likely found in many pockets of the country but were not as wide-spread. As forests were cut down agriculture and settlement, the doves territory expanded. 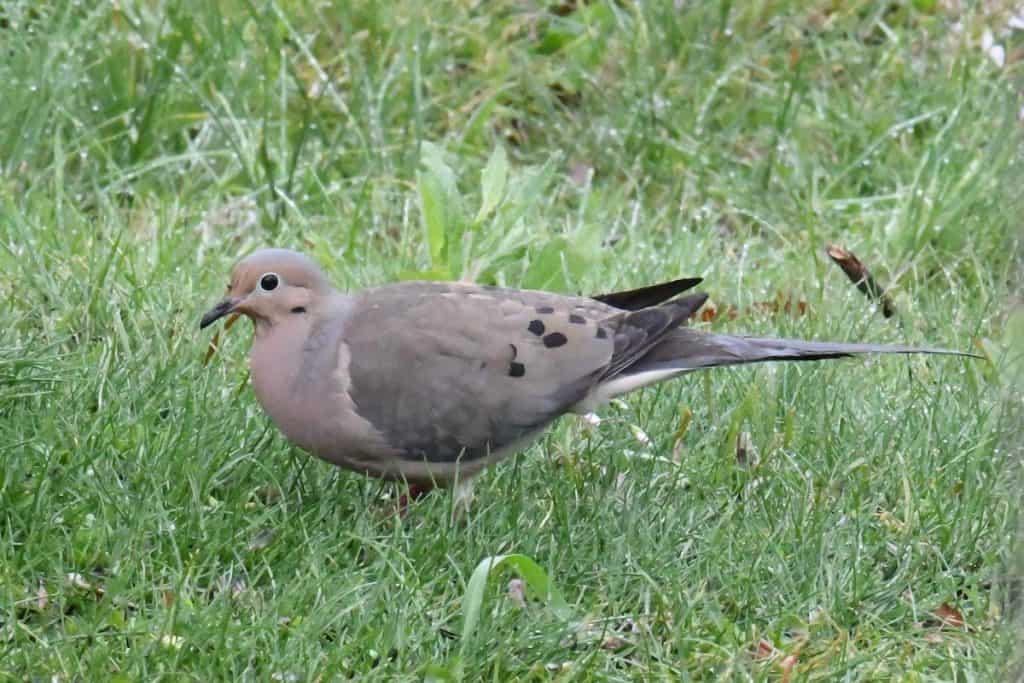 5. They Spend A Lot of Time on the Ground

While perfectly capable of flying and perching in trees, Mourning Doves spend a lot of time on the ground. Like their cousin the pigeon, they can easily walk around and prefer to forage for seeds and other food from the ground. If you have backyard bird feeders, you will most likely see them looking for seeds that have fallen beneath your feeders, or using a platform feeder.

Spending a lot of time out in the open on the ground can make them vulnerable to a number of predators, especially house cats. Cats are actually a common predator of mourning doves.

Mourning doves can eat an impressive amount of food, especially compared to other birds of similar sizes. Each day they will consume between 12 and 20 percent of their body weight. Nearly 100% of their diet is seeds, but they may sometimes eat berries and snails.

Mourning doves are able to eat so much thanks to an area of their esophagus called a crop. The crop can store a large amount of seeds that the mourning dove will digest later from a safe perch. In fact, a whopping 17,200 bluegrass seeds were once recorded in a Mourning Doves crop!

7. They can survive in the Desert

Unlike many other bird species, mourning doves manage to survive in deserts of the U.S. southwest and Mexico. One adaptation that helps with this is their ability to drink brackish spring water. Brackish water is basically the middle point between freshwater and ocean saltwater.

Brackish water contains enough salt that most mammals, including people, are unable to drink it without becoming dehydrated. Mourning Doves can consume brackish water without dehydration.

Mourning doves can live to be pretty old if they are not hunted or killed by predators. On average they may live 2-7 years in the wild. However the oldest known mourning dove was just over 30 years old, and he was killed by a hunter in 1998 in Florida. He was banded in 1968 in the state of Georgia.

9. Mourning doves have a few  nicknames

10. Their name comes from their call

They get their name “Mourning” because when describing one of their cooing calls, people often thought it sounded sad or mournful. This generally refers to their “perch-coo”, a song that unmated males make from an open perch. You are likely to hear them doing this in your yard from a tree branch or rooftop. The sound is a coo-oo followed by 2-3 distinct coos. 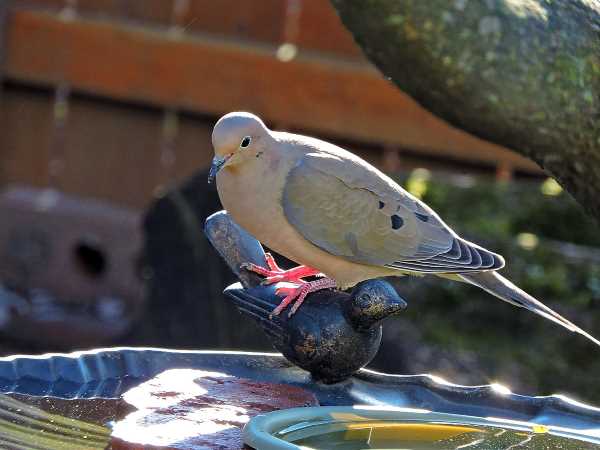 11. Males and females look the same

Unlike a species such as the Northern Cardinal, where males and females are visibly quite different, Mourning Doves of both sexes have the same plumage. They have a pale gray body with peach-toned underparts, black spotting on the wings and pink legs.

Males are a little bit larger than females, with slightly pinker breasts and brighter heads. But those differences are subtle and you’d have to look pretty close to notice them.

12. They nest in a variety of places

Mourning Doves can nest in a variety of locations, often based on what part of the country they are in. For example, in the west they often nest on the ground, while in the east they choose to nest more often in trees or shrubs. In the desert, they may even nest in the crook of a cactus. They aren’t bothered by nesting near humans, and will often end up in gutters, eaves, and planters around the house.

For the most part, mourning doves mate for life. Once a male and female have paired off, they tend to stay with each other unless something happens to one of them.

The male seeks possible nesting sites and the female will have the final decision. He will bring the nesting materials, such as pine needles and twigs, to the female and she will use them to build the nest. Often, nests are pretty flimsy looking and don’t have much insulation or lining.

Males and females trade off incubating the eggs. Those who have watched the nests closely have noted that females tend to take the early morning, evening and night shift while males cover late morning to mid-afternoon.

15. They engage in pair-bonding rituals

Male-female pairs of Mourning Doves will preen each others neck feathers as part of a bonding ritual. This will progress to bobbing their heads up and down in sync while grasping each others beaks.

16. Their wings make a sound when they take off

If you’ve spent any time around Mourning Doves you may have noticed that every time they take off from the ground, they make a whistling or “whinny” noise. This sound doesn’t come from their throat, but from their wing feathers. It has been theorized that the doves use this as a built-in alarm system, spooking nearby predators and warning nearby birds.