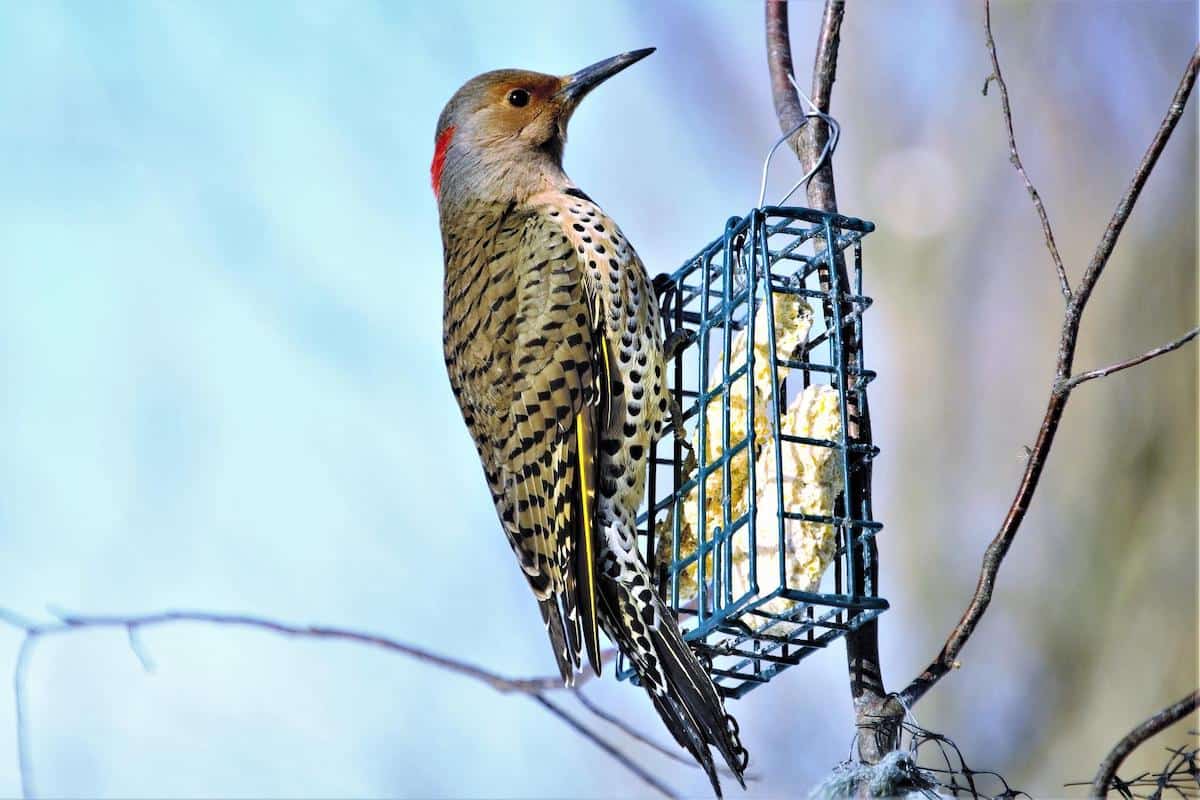 Northern Flickers are some of the most interesting members of the woodpecker family. From their bold feather patterns to their larger size, they are a favorite among backyard bird watchers. Common in open forests and human-inhabited areas across North America, they keep populations of pesky insects at bay. Learn 15 interesting facts about Northern Flickers, and just what makes them so unique.

1. You can find them throughout North America and some of the Caribbean Islands.

Northern Flickers can be spotted in the United States throughout the year, from California to New York. Some populations migrate north to Canada to breed during the warmer months. A band of Northern Flickers also dwells in Mexico year-round.

Northern Flickers are also commonly found in Cuba and parts of Guatemala, El Salvador, and Honduras.

2. Species in the East and West have different colors

Northern Flickers in the east and west have different colors on the underside of their wings and tail. In the east, you get the “yellow-shafted” variety, and in the west the “red-shafted”. These colored feathers can be difficult to see unless the flicker has its wings or tail spread out, or you see them flying overhead.

3. Males and females look similar with only a few differences. 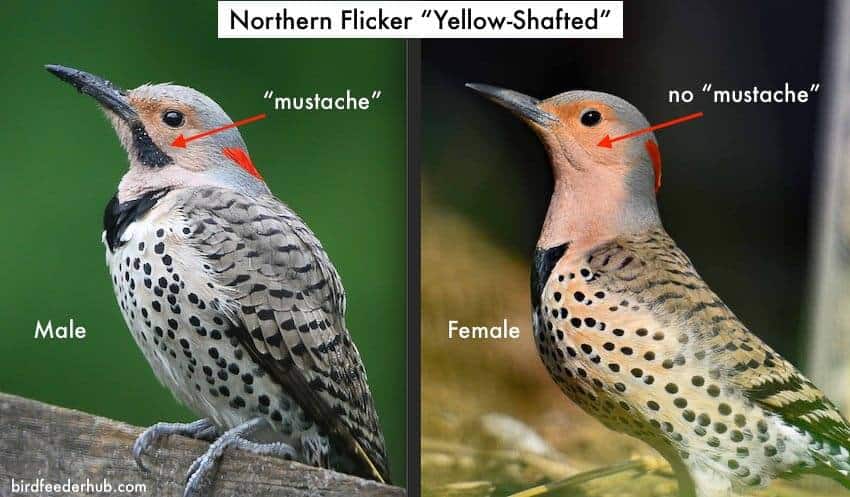 Male and female Northern Flickers have similar plumage. They both have a U-shaped black patch on their breast feathers. Their wings have black bars, and their chest and belly are covered in black spots. In flight, you can see a white patch above the tail. Both sexes have colored feathers on the underside of their wings and tail, yellow in the east and red in the west.

The only obvious difference is the male has a ‘mustache’ or whisker on either side of its beak. In the east this is black, while in the west it is red. Females do not have this facial marking.

4. They eat more ants than any bird in North America.

Some people call Northern Flickers the “anteaters of the sky.” Their slightly curved bill helps them hunt for ants on the ground and on the sides of trees. One scientist found over 2,000 different species of ants in a single Northern Flicker’s stomach!

5. They nest in dead trees and snags.

Northern Flickers prefer to nest in dead trees. Their favorite species of tree is the trembling aspen, which rots easily, making it easier for the Northern Flicker to excavate a nest.

If those aren’t available, they nest in other species of trees, fence posts, telephone poles, or even the siding of houses!

Sometimes, they might even nest in a hole in the ground, although it is not common. They may also use custom-built nest boxes.

The mated pair excavates out the inside of a rotting tree, building a hole with a single entrance. The tunnel goes down between 6 -18 inches and opens into a chamber where the female will lay her eggs.

Once a mated pair finds a suitable tree, they get to work pecking away at the soft wood. The pair doesn’t build a nest inside the cavity with twigs or grass like many songbirds. Only woodchips from their construction process line the bottom of the hole.

Northern Flickers occasionally reuse a tree cavity the following year, unlike other woodpeckers.

7. Parents work together to incubate the nest and raise chicks.

Northern Flickers are dedicated parents. Both the male and female excavate the nest cavity, incubate the eggs, and bring back food for the chicks. They even have a schedule!

Scientists discovered that female flickers incubate the eggs during the day, while males defend the nest. At night, the roles reverse.

8. They get their name from their “fencing duels.”

The Northern Flicker gets its name from the way males compete for the attention of females. They flick their wings open and closed, showing off their size and colorful plumage.  They also bob their bodies and weave their heads around in patterns.

9. They love any habitat with wood.

Wood is everything to the Northern Flicker: nesting site, food source, and resting perch. This bird’s favorite habitat is an open grove of trees. They like to use the exposed ground to forage for insects.

Northern Flicker males compete with each other, even if it isn’t breeding season. During breeding season, they engage in fencing duels while females look on. They also claim territory and warn others off by drumming. Drumming is when a woodpecker repeatedly bangs its beak onto a solid object in rapid succession (25 times per second) to make a sound. Most people say it sounds like a jackhammer.

They want the sound to carry as far as possible, and will often choose metal objects to drum on to get the most sound, such as gutters, chimney caps, satellite dishes and stop signs. Drumming advertises that the male is available and ready to mate. It usually occurs from the middle of March to late June.

11. They are one of the only woodpeckers in North America that isn’t black and white.

Northern Flickers are considered the ‘black sheep’ of the woodpecker family because they have brown feathers and forage for food on the ground. Their plumage helps them blend into foliage and the dusky brown colors of the forest floor. Most other woodpeckers in North America have black white stripped plumage, helping them to blend in with tree bark.

12. Northern Flickers’ tongue wraps around its skull like a football helmet.

Northern Flickers’ tongues are specially adapted to excavating insects from holes and crevices in trees. To reduce risk of hurting their brain, their tongue evolved to wrap around the brain. When the bird pecks at high speed into a hole in a tree trunk, the tongue cushions the brain from impact.

13. Northern Flickers forage for food on the ground.

Unlike other woodpeckers, which usually remain high in the treetops or along the trunk of a tree, Northern Flickers venture down to ground level to search for food. Their favorite meal, ants, can often be found here. You can often see them digging around through leaf litter, or pecking at the ground.

Even their nests are relatively close to the ground–ranging from 6 to 15 feet.

14. They eat a wide variety of foods.

Along with ants, Northern Flickers eat fruit, seeds, nuts, and even snails. They aren’t afraid to peck at the ground to find insects hidden in deadfalls or decomposing logs.

Some scientists have discovered that Northern Flickers will also eat young bats.

During the winter, it’s helpful to put out suet for Northern Flickers. Their regular diet is extremely high in protein. Suet, which is higher in protein than most seed mixes, can provide them with better nutrition in the colder months.

Northern Flickers leave evidence of their search for food wherever they go. The dime-sized holes they leave behind in trees, branches, and even wooden siding are in straight lines and hard to miss.