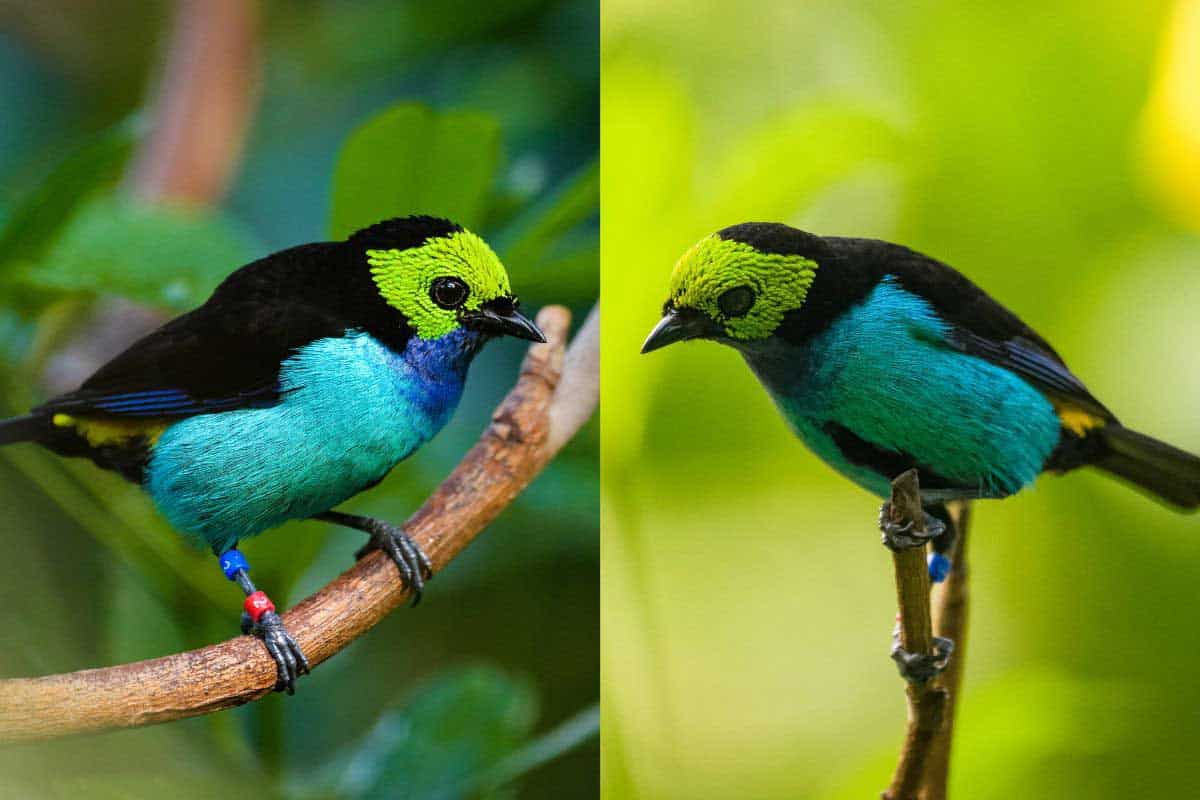 Birding in South America can lead you to a plethora of beautiful bird species. Among those species is a vibrantly-colored bird and somewhat mysterious bird known as the Paradise Tanager. Not much is known about these beautiful birds of the rainforest, but we have put together as many facts about Paradise  Tanagers as we could find.

As a native bird to South America, the Paradise Tanager is most commonly seen in the Northern section of the continent. Although these birds are pretty common in their native areas, they have not been heavily researched and scientists are hoping to learn more about these special birds.

Here are some interesting facts about the Paradise Tanager for birder lovers who want to learn more about this beautiful species.

Paradise Tanagers are most notably known for their vibrantly-colored plumage. Their black wings, beak, nape and tail provide the perfect contrasting background for their otherwise neon-like colors.

They sport a bright yellow-green mask across their face and eyes, a purple throat, bright blue chest and belly, and red or yellow patch on their lower back.

It’s also notoriously difficult to distinguish between male and female Paradise Tanagers as they look almost identical to each other. Unlike some other birds, males and females have the same coloring.

Paradise Tanagers are non-migratory and are native to several countries in South America. Despite their scientific name Tangara chilensis, you won’t find them in Chile. Where you will see these colorful birds is humid tropical and subtropical forests in Peru, Venezuela, Colombia, Bolivia, Ecuador and Brazil.

3. There are four subspecies of Paradise Tanagers

Each subspecies can be distinguished its location, and some have very slightly different coloring such as a red back versus a yellow and red back.

Paradise Tanagers are omnivores that primarily eat fruit, but also supplement their diet with insects.  They may also consume nectar from various flowers.

This bird species does most of its meal foraging up in the canopy of the Amazon Rainforest and will search for fruit and insects underneath branches of tall trees.

5. Paradise Tanagers are most often found in woodland habitats

Along with making the Amazon Rainforest home, Paradise Tanagers also prefer any forest or woodland habitat in a lowland area. You’ll most often be able to spot a Paradise Tanager in the canopies of the Amazon as they forage for their next meal and you can sometimes spot them in the midstory level.

Paradise Tanagers prefer to travel in small flocks of around 5-15 birds, and will sometimes mix with groups of other species such as other tanagers and honeycreepers. They may tend to be less social during the nesting season, and hang out more with other birds during the December – April season.

7. Paradise Tanagers have a variety of bird calls annotated to them

This bird species has three distinct calls it uses at any given time. A sharp “chak” sound, a rising “zeee” sound and a high “sizit” sound that is either sung or vocalized rapidly. They join in the dawn chorus first thing in the morning.

The typical mating season for the Paradise Tanager species lasts from June until late August. Before laying eggs, Paradise Tanagers will construct a nest with forest vegetation into the shape of a cup. These nests are formed in the canopy layer to protect against predators.

The type of vegetation commonly used includes leaf bits, lichen-like moss, grasses and even a type of white fungus. The female is the nest builder, and the males will tag along during construction.

The female Paradise Tanager will lay 2-4 eggs into the small nest and incubate them for just over two weeks. Because males and females look basically the same, researchers don’t have good data on if males help take turns incubating the eggs.

Once hatched, the babies are fed small spiders and caterpillars.

10. We don’t have exact data for the Paradise Tanager species

Unlike birds found in your backyard that are easy for scientists to count and study, data is scarce for the Paradise Tanager. Due to their remote rainforest habitat, and propensity to staying up in the tree canopy, they are difficult to find and study, let alone get a good idea of their population density. Currently they are not considered to be an endangered or threatened species.