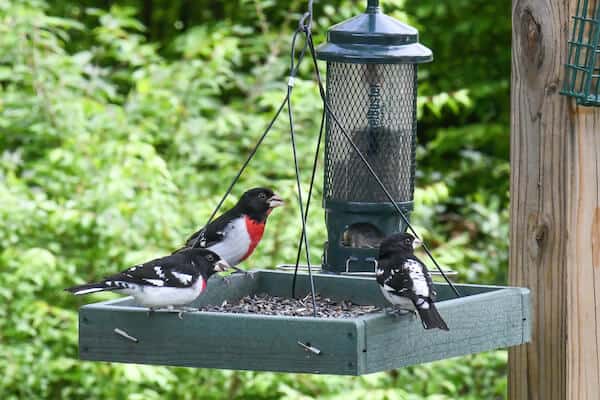 Although they stay out of sight in the treetops, you can hear the beautiful songs of the rose-breasted grosbeak during the North American spring and summer. These common birds in wooded habitats have a striking appearance and are a sight to see, whether you’re an amateur or professional birdwatcher. Read on to learn more about them with these 22 facts about rose-breasted grosbeaks.

Adult males have white underparts and rumps contrasting against their black head, back, wings, and throat. Males also flash pink-red underwings. They get their name from the bright reddish-pink patch on their breasts. In contrast, females are brown and heavily streaked, flashing yellowish underwings.

Before migrating, males will molt into their winter plumage that includes dark streaks on their sides and flanks, brown-edged head and upperparts, and barred rumps.

Once a male attracts a female, they stay together in the male’s established territories. Both males and females also equally share incubation and feeding duties.

Males and females work together to choose a nest site and build the nest. Nest building can last 4 to 9 days from dawn to dusk. They’ll use various materials, including twigs, grasses, weed stems, coarse sticks, hair, straw, rootlets, and decayed twigs.

Sometimes their nests are so thinly constructed and flimsy-looking that you can see the outline of the eggs through it. It’s believed their use of forked twigs is what helps hold the nest together.

The 1 to 5 eggs they lay per clutch are blue to pale green with purplish or reddish-brown speckles. Eggs are around 1-inch long and 0.6 to 0.8 inches wide, with an incubation period of 11 to 14 days.

These birds make a sharp pick or pink sound that resembles a woodpecker call. They also have a mellow warbling that sounds like a sweeter version of the American robin’s song.

8. Male rose-breasted grosbeaks can sing up to 689 songs per day

When it comes to the breeding season and advertising their territories, males put in the extra effort with their melodic songs. They will sing up to 689 songs per day to attract a mate. 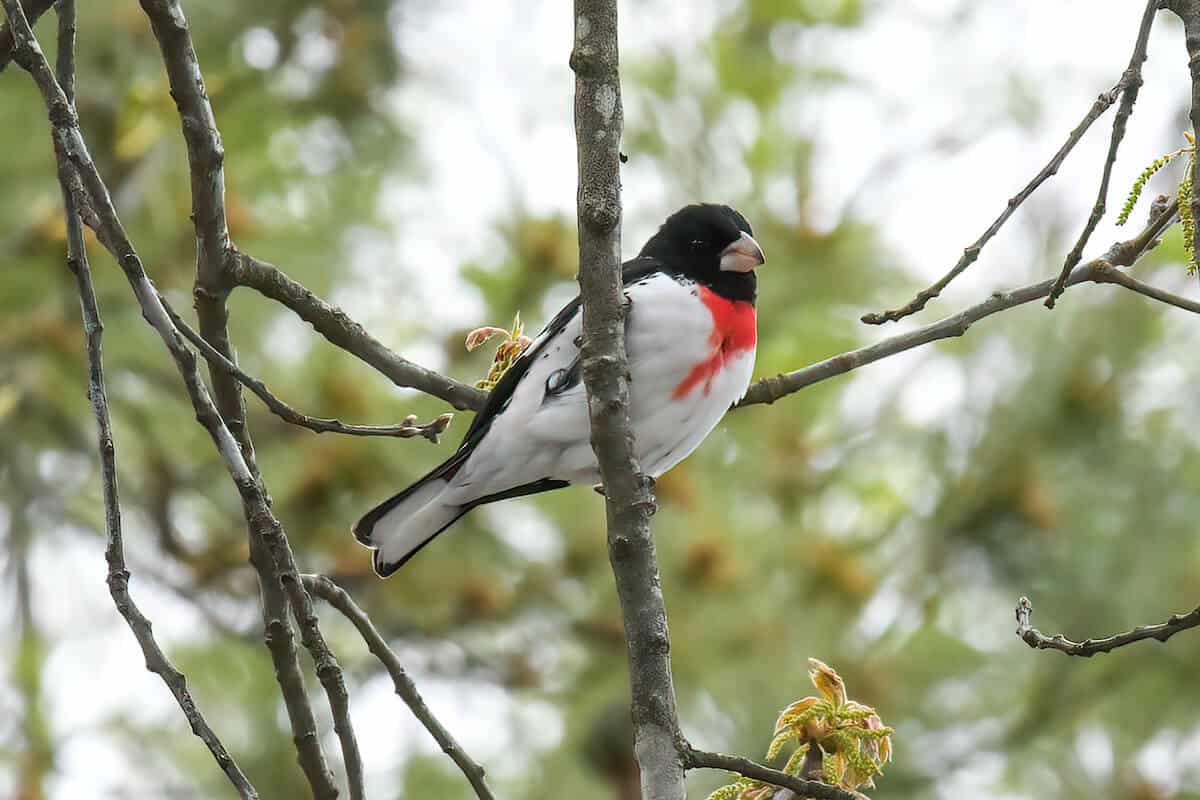 Tasked with sharing the incubation duties with the females, the male rose-breasted grosbeak is known to sing their famous sweet-sounding warble while sitting on the nest.

The breeding range for these birds are moist deciduous forests, deciduous-coniferous forests, semiopen habitats, and thickets across the northeastern U.S. They also range into central and southeastern Canada. During the fall they will migrate to South and Central America for the winter.

Having to fly over the Gulf of Mexico during migration, these birds are strong fliers and can cover over 500 miles non-stop easily. They start their migration in late September or October and return to breeding grounds in late April or early May.

12. Rose-breasted grosbeaks can fly in flocks of 50 birds

While they will migrate individually or in pairs, you can also see these birds flying across America in loose flocks of around 50 birds. Sometimes flocks even include other species.

Cooper’s hawk and sharp-shinned hawk are two of the top predators that hunt the rose-breasted grosbeak in the wild.

These birds will aggressively and noisily defend their nests against various nest predators, such as blue jays, common grackles, and red and gray squirrels.

15. Rose-breasted grosbeaks are territorial during the breeding season

They are very aggressive birds during the breeding season to defend their nests from nest predators. Breeding pairs will tolerate migrant males if the intruder to their territory is silent.

However, females are known to drive off other females approaching their mate. In contrast, they are sociable birds outside the breeding season and will roam the lands in groups of a dozen or more individuals.

These birds eat insects and wild fruit and seeds during the breeding season, including sunflower seeds, blackberries, and raspberries. They stick mostly to berries during the fall migration. They sometimes feed by snatching insects, such as bees, butterflies, and moths, mid-air.

Most active during the day, you can find them foraging in trees and shrubs or catching insects mid-flight. However, during migration, they will fly at night.

Although their huge beaks are well-designed for eating seeds, it also comes in handy when feeding on insects with tough exoskeletons, such as crickets and large grasshoppers.

19. Rose-breasted grosbeaks play an important role in the ecosystem

Due to their feeding habits, these birds support the ecosystems they live in by dispersing seeds and controlling insect populations.

These birds are quite shy around humans and can be hard to spot in the wild, even despite the male’s brilliant coloring. They typically stay hidden, singing in the canopies of forests. If you want to catch a glimpse of them in your backyard, put out high-quality black-oil sunflower seeds in your bird feeder mix.

21. Rose-breasted grosbeaks are trapped for sale

Due to their pretty sound and unique look, these birds are often trapped and sold as cage birds in their wintering range of Central and South America.

22. Rose-breasted grosbeaks are commonly mistaken for the black-headed grosbeak

Although the male’s adult plumage is unmistakable, the coloring of the females and first-fall males can be similar to the female black-headed grosbeak. Their songs are also similar. 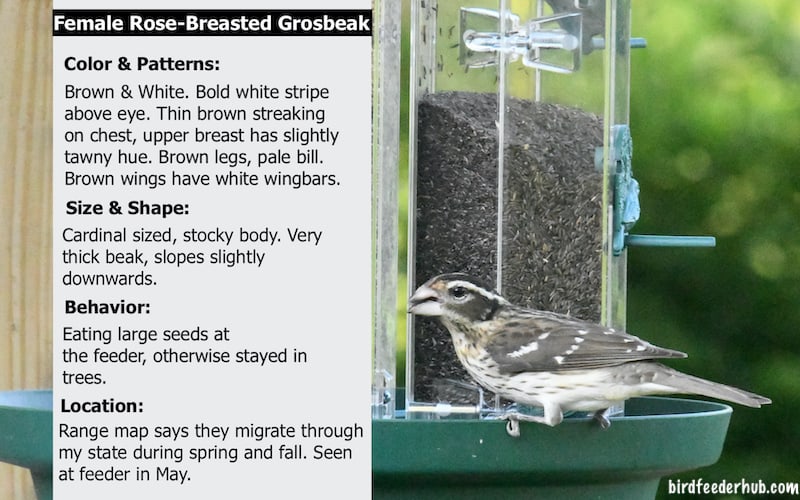 Far migrators that spend the spring and summer months in North America, rose-breasted grosbeaks are striking birds and known for their beautiful singing abilities.

Depending on where you live, you could see these shy migrants in the wild. You might see a male singing from the branches, while building a nest, or when incubating eggs. We often see rose-breasted grosbeaks at our feeders in early spring as they’re migrating.