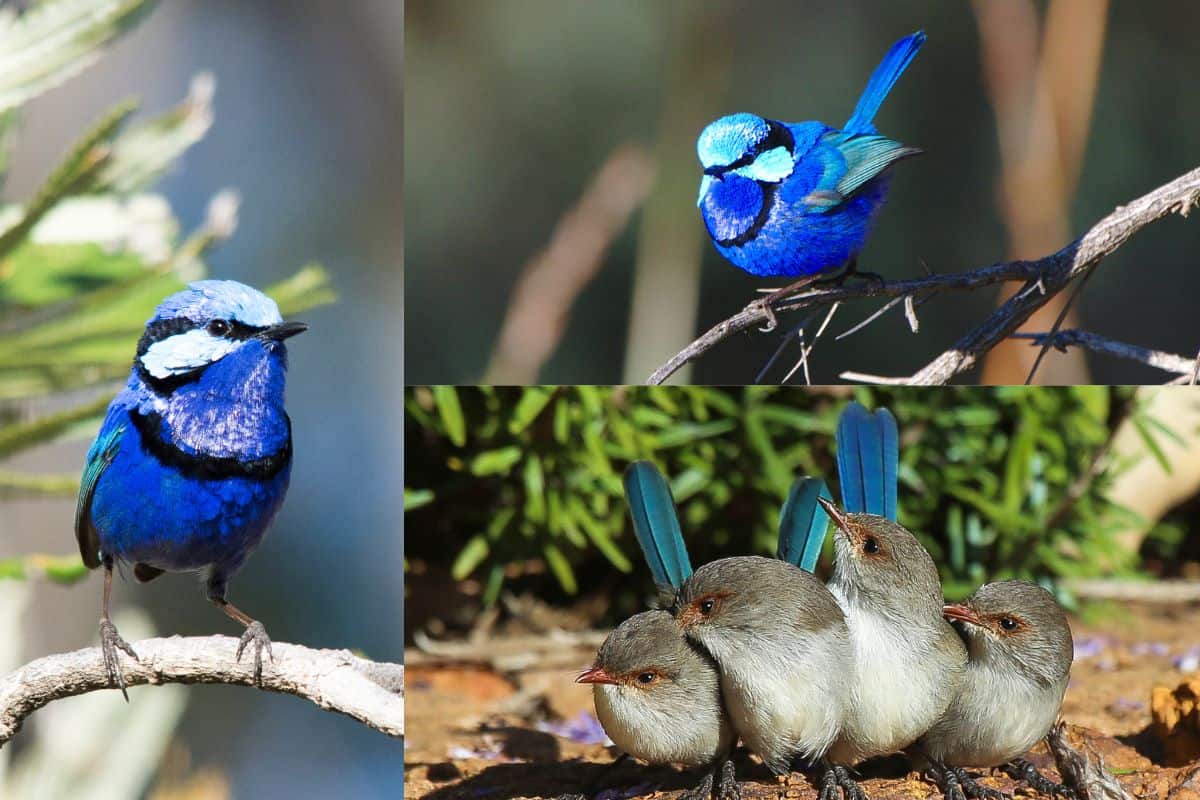 Splendid fairywrens are birds belonging to the Maluridae family of Australian wrens. They share many similarities with the wrens we know in North America, but they belong to a separate family and are not true wrens. These perching birds are bright blips of color in the arid landscapes of central and western Australia. Let’s take a look at some interesting facts about Splendid fairywrens and learn more about these colorful birds.

1. Splendid fairywrens are native to Australia.

These perching birds live only on the Australian continent. In the country, they prefer dry, arid climates over the tropical forest and rainy areas that line the coasts. However, some do inhabit coastal areas, but only in the western part of the country.

Look for them within Australia’s inland regions. They also reside in western Australia, especially in the south. Populations thrive in Perth and farther south in Margaret River. 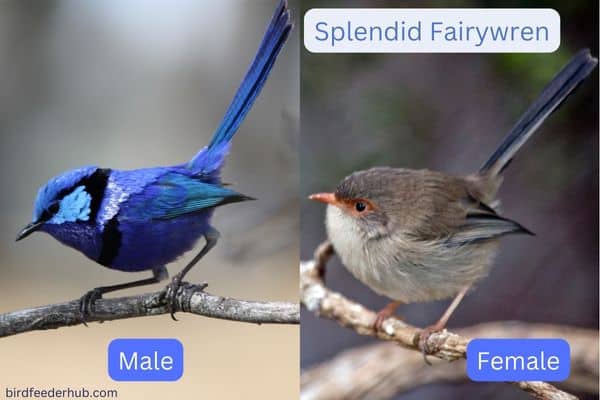 Splendid fairywrens are sexually dimorphic, meaning that males and females have different plumage. In this songbird’s case, it refers to the male’s much more vibrant blue color.

Females also molt, but remain the same color year-round. She looks similar to the male’s non-breeding plumage, which is dusty brown. However, she has a red-brown ring around her eye, and a blue tinted tail.

3. They have elaborate courtship rituals.

Splendid fairywren males conduct several different dances and displays to woo a female. They are already striking in their bright blue breeding plumage, which stands out against dry brown desert foliage.

Three such displays and behaviors are notable:

1) Sea Horse Flight – The male flies around in an undulating pattern similar to that of a seahorse when underwater.

2) Flower Petal Gifts – male splendid fairywrens find and pluck pink and purple flower petals, which they give to females as gifts. Since these birds mate for life, this may serve to strengthen the pair bond between them.

3) Face Fan – males can extend and fan-out their bright cheek feathers. This fan display can be made during courtship, or used as a threat.

Unlike other species of fairywrens, splendid fairywrens have not adapted well to urban areas. This may be due to their reliance on underbrush and thickets, two types of vegetation that humans generally clear out or remove upon entering and settling an area.

They are spotted in rural areas and national parks in southwestern Australia. Humans don’t faze them too much; it is mostly the destruction of habitat that forces them away.

5. Splendid fairywrens can live in the desert.

Dry and arid environments are the splendid fairywren’s bread and butter. They prefer non-pine or eucalyptus forests since those don’t have underbrush.

Unlike many desert animal species, they are active during the day. This increases in the winter when they must forage more to find sufficient food.

Splendid fairywrens are insectivores; most of their diet comes from eating insects that they forage for among underbrush and leaf litter. Sometimes they eat seeds, especially during the winter. They may forage together in a pair or group. You’ll often see them hopping around on the ground, waggling their tail which sticks straight up behind them.

7. They live together in groups.

While they do pair off into loosely monogamous couples, splendid fairywrens are gregarious and live together in groups of between two to eight.

These groups may be related in a variety of ways: some could be hatchlings from previous broods, a nestmate, or even a parent. These combinations of relatedness help the flock of songbirds maintain a collective sense of ownership towards food finding and defending territory.

8. Their nests are made of grass.

The female splendid fairywren crafts her nest alone. She weaves the tiny oval-shaped dome out of roots, grass, and bark. It has one entrance and looks somewhat like an igloo.

She works alone, but she doesn’t live alone. Females build nests near each other in a neighborhood-like fashion.

9. Males and females pair off into monogamous couples, but they have ‘affairs.’

The splendid fairywren has interesting romantic priorities. Males and females mate for life, however both sexes will also mate with other individuals. Scientists have found that over a third of all chicks raised by a mated pair have been fathered by another male.

10. They work together to raise chicks.

For the splendid fairywren, raising a brood of chicks is a community effort. The parents work to bring food to their young, but other birds do too. Who are these helpers, and why do they help?

Scientists have found that most of the helpers are former nestmates of the parents, other chicks that have grown up but not yet left the group, or another bird one of the parents has ‘cheated’ with.

Six years is a substantial lifespan for a prey bird like the splendid fairywren. Their eggs are especially vulnerable to being eaten by other birds like cuckoos, as well as snakes.

This may be one reason why this songbird nests in groups and congregates together. The more birds around the nest, the less likely it is for a predator to find an opening to attack.

12. They call often and loudly.

Males defend their territory with gusto. One group’s territory averages about 11 acres square. They usually defend territory against others of their own kind as well as predators like larger birds, rats, and cats. This can involve harsh, metallic-like calls and puffed up displays.

Females don’t make as much noise, but they do make a purring sound while laying and incubating their eggs.

The splendid fairywren is a bird of brush and foliage. It requires thickets to forage for its insect meals. When humans clear out the underbrush from forests or remove them entirely to build neighborhoods, shopping centers, and business parks, it destroys the bird’s required habitat.

Even though pine tree plantations don’t leave a visible scar on the landscape, they still disturb the splendid fairywren because they don’t have the underbrush this songbird needs to thrive.

If you live in this bird’s native range, it’s easy to attract them to your yard. Just put out general birdseed for them and they will stop by.

Many songbirds mature from chick to fledgling in just a matter of weeks. To grow this fast, they need abundant nutrition from sources of the highest quality.

One way splendid fairywrens ensure that their chicks receive the most vitamins and minerals is by managing what they bring back to the nest.

Scientists have discovered the parents feed their chicks grasshoppers, which are an extremely nutrient-dense insect.

16. They can see into the ultraviolet spectrum.

Splendid fairywrens have a wider range of sight than humans do. On the higher side of the visible light spectrum, they can see farther into the ultraviolet rays. While we don’t know exactly what these birds see, we have an idea.