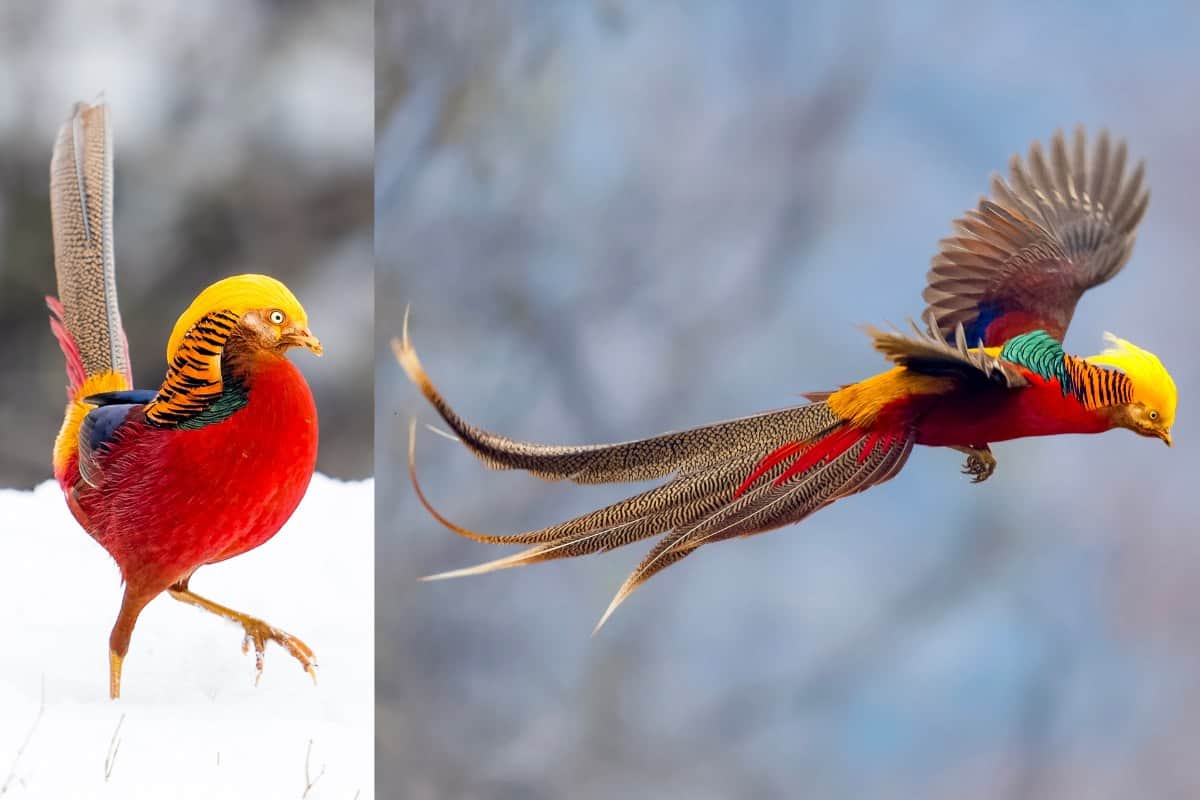 The Golden pheasant is a colorful inhabitant of Asia but an exotic visitor to most of the western world. They adapt to many temperate environments and habitat conditions. First recorded in North America in 1740, these birds have a variety of interesting traits that continue to attract birdwatchers and farmers alike. Keep reading to learn 15 of the most interesting facts about the Golden pheasant!

15 Facts about the Golden Pheasant

1. It is native to China but lives around the world.

While Golden pheasants originated in Asia – China’s southern and western forests, to be exact – they have spread throughout the world as a result of captive breeding programs and private collections.

A substantial population lives in the rural forests of England. They were once kept for pheasant shoots in the late 19th century. Now, about 100 breeding pairs call the forests home. Other places this pheasant has established populations include the U.S., Canada, Mexico, Argentina, the Netherlands, Australia, France and New Zealand.

The Golden pheasant exhibits a trait scientists call sexual dimorphism. This term means that the male and female of the same species look very different.

Male Golden pheasants are a patchwork of brilliant colors. Their head and rump have their namesake golden hue, but they also sport a read chest and belly, orange and black striped neck, green upper back and hints of blue on their wings. 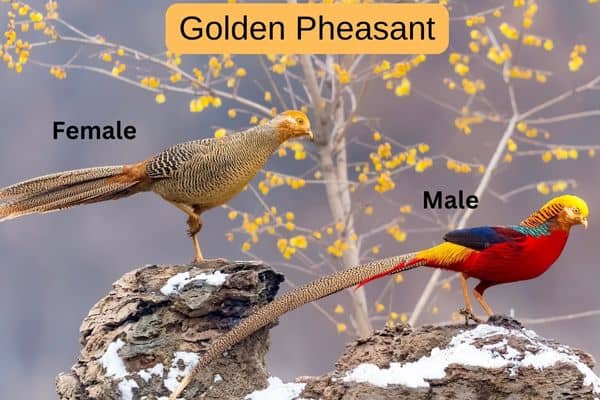 Female Golden pheasants are much more subdued. They exhibit plainer coloring of a tawny brown shade as well as barring across their feathers.

Barring is another word for a black stripe across each feather. Barring helps the female blend in with shadows and dapples of sunlight across the forest understory. It’s an effective way for the bird to avoid predators.

3. They roost in trees at night.

Most pheasants choose to spend the night in trees instead of on the ground. The word ‘roosting’ means to do just that.

Golden pheasants roost in the trees at night because there is a lower chance of predators being in trees than on the ground. This adaptation is shared among many types of fowl: chickens, blackbirds, and starlings are just a few.

4. Males have a golden crest.

Male Golden pheasants have a bright golden crest that is impossible to miss. This is one of the reasons behind the bird’s descriptive name.

Males use their crest to assert their ownership of territory, intimidate competitors, and to impress females. The mohawk-like feathers extend from their forehead to the crown of their head. Almost like a head of long golden hair.

5. They often hybridize with other pheasants.

In the wild, hybrids don’t achieve notoriety, but the opposite is true for pheasants in captivity. When the birds do produce hybrid offspring, it is usually the result of a Golden pheasant mating with a Lady Amherst’s pheasant.

These offspring birds are also pleasant to look at and have similar traits of both parental breeds.

6. They can be kept for eggs and meat.

Pheasants are more high-maintenance egg layers than chickens, but they can be kept for eggs. They are also raised for meat.

Some people in Asia keep Golden pheasants as a type of egg-laying fowl. While they may not produce as many eggs as conventional chickens do, they make less noise and are more aesthetically pleasing. Their eggs can be sold at a higher price than chickens’ eggs, making them useful for farmers leaving poverty.

In the deciduous forests of southern China, Golden pheasants naturally seek out dense thickets and brush. They like to have the option to run for cover when a danger makes itself known.

Brushy woodlands are the best areas to scout for the foods they eat: grubs, seeds, and berries. Berry bushes tend to grow in the shade of the forest. The meaty acorns and seeds dropped by trees accumulate among the leaf litter of the forest floor.

Golden pheasants will quietly accumulate near grain mills and forest edges, especially in agricultural towns. They forage alongside the edges of fields to find cast off seeds and unharvested grain.

Unlike other semi-domesticated fowl, Golden pheasants are very shy. They prefer to hide in dense thickets and stands of foliage when individuals visit their enclosures or pens.

The Golden pheasant is a prey species with few defense mechanisms. Hiding in underbrush and staying completely motionless are two ways it avoids being spotted by a predator.

When spooked, they flap their wings rapidly and quickly fly to tree branches above and out of the reach of their would-be predator.

Males lift up their neck feathers in the shape of a ruff in order to impress females. These neck feathers are also known as a ‘cape’ because they extend over his neck and upper back.

Females have the opportunity to walk amid a crowd of male Golden pheasants to see what’s available and pick the male they prefer most.

A female Golden pheasant lays between 8 and 12 eggs after mating. The male doesn’t help incubate or raise the chicks.

She incubates her eggs for about three weeks. When they hatch, she feeds them for another two weeks until they learn to fly. Golden pheasants reach maturity after a little over a year.

11. They love to forage on the forest floor.

The Golden pheasant spends most of its waking hours on the ground. It is not a strong flier; usually the only two times the pheasant would be perched in a tree are to evade a predator and to roost at night.

They use their strong legs to scratch among the leaf litter. They find grubs by turning over small stones and fresh seeds by scratching in the damp soil.

12. There are wild and captive populations.

Golden pheasants have been semi-domesticated for over three centuries. Kings from ancient tales were said to have the birds walking around in their courtyards. Even George Washington recorded such pheasants on his property.

Despite their widespread popularity as ornamental birds, most golden pheasants still live in the wild. They are so shy that little is known about their natural behavior in the wild, such as their nesting characteristics.

13. They have bright yellow legs.

Both male and female Golden pheasants have bright yellow legs and feet. This can be an especially helpful fact if you’re trying to identify a female golden pheasant who is in a group with other pheasants.

Most species of pheasants have brown or black legs. Some have red legs, but most are neutrally-colored.

14. They are easily tamed and well-behaved in captivity.

Despite their shy nature, golden pheasants make a great addition to a flock of fowl. They are predictable, well-behaved, and have the ability to disappear effectively into a forest.

The backyard farmer need not be concerned with unattractive chicken runs and unpleasant smells; golden pheasants are a clean and well-kempt alternative.

15. They love to eat sunflower seeds.

Captive golden pheasants have a largely-vegetarian diet. One great type of food to feed them is sunflower seeds.

While you’re unlikely to attract golden pheasants to your backyard by offering these seeds, you may have luck taming your pheasant by offering sunflower seeds when training.