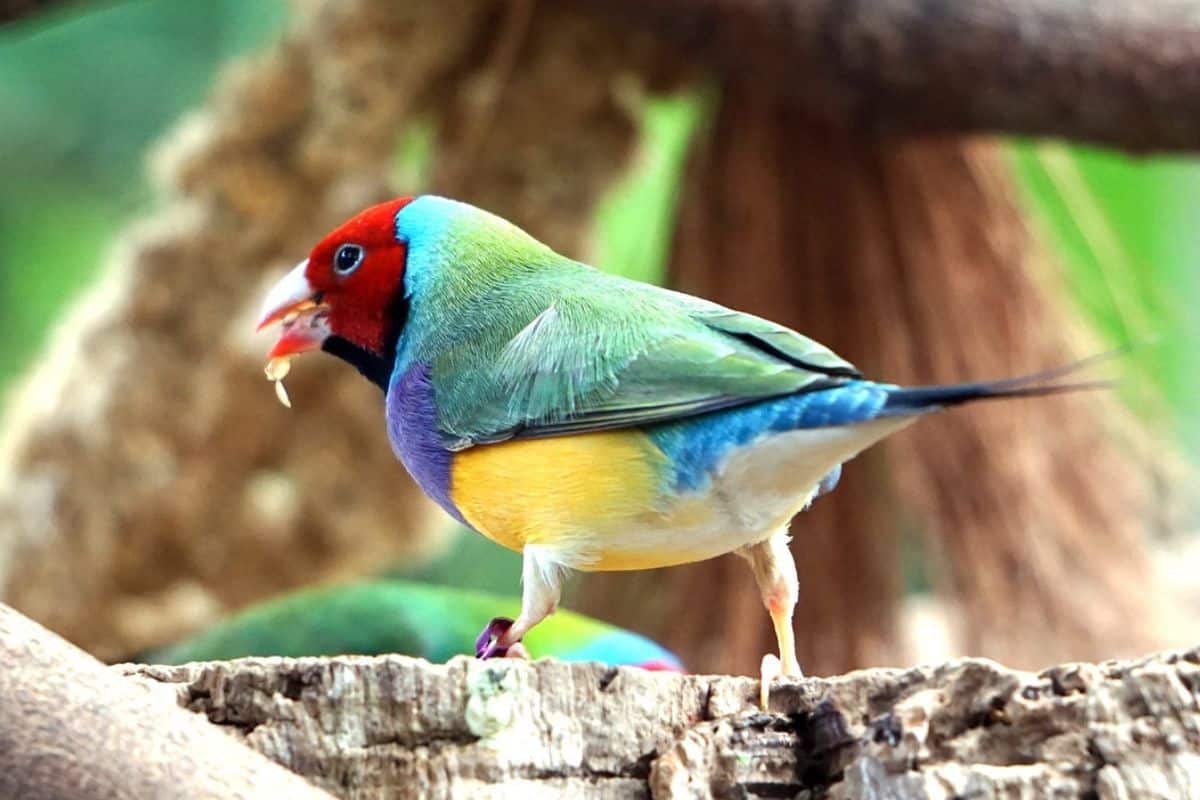 Australia is home to a plethora of amazing plant and animal species. It’s also widely known for the thriving and vibrant wildlife throughout the country. Whether those species are in the Outback or the middle of Sydney, there’s one particularly colorful bird we’d like to highlight. In this article we will look at photos and facts about the Gouldian finch.

Facts About the Gouldian Finch

The Gouldian finch, not to be confused with the Goldfinch, is endemic to Australia and is among the more vibrantly-colored species in the country.

Here are some interesting facts about the Gouldian finch to satisfy your birding curiosity.

1. Gouldian Finches are native to Australia

This native Australian bird is endemic to the Northern section of the country. Most often, you’ll find Gouldian finches in the tropical savannah, thickets, or the woodlands with grassy plains and water not far away. While they aren’t migratory birds, they travel a lot during the dry season in search of food and water.

2. These finches are named after a British ornithologist

British ornithologist John Gould officially gave this bird its name in 1844, in honor of his wife Elizabeth. Many consider John Gould the “father of bird study in Australia”. This lovely bird is sometimes also known by the names rainbow finch, Gould’s finch or the Lady Gouldian finch.

3. The Gouldian Finch can have three different facial colors in the wild

4. Males and females look similar with slight differences in color

In addition to their beautifully-colored faces, the Gouldian finch also dons a number of other vibrant colors. The male and female species both have black, green, yellow, and red markings. Although both sexes have the same color patterns, females can be distinguished from males as their plumage is slightly duller.

You can most often tell a male and female apart by looking at the bird’s breast. Males will have a vibrant purple breast while female breasts are classified as a lighter mauve color.

Saying these birds are extremely social is an understatement. Except for during the mating season, it’s common to find Gouldian finches joining in on mixed flocks. These flocks can total up to 2,000 birds and often consist of long-tailed finches and masked finches.  They’re most active during the daytime and will forage in small groups either on the ground or in the air.

Unlike other birds, the Gouldian finch isn’t known for a distinct vocalization or complicated songs. Instead, the rare sound they make sounds like a high-pitched “ssitt” sound. Gouldian finches have also been recorded making different trills, chirps, and hisses. This species is among the unlikeliest to cause disruption as their vocalization isn’t grating to the typical human ear.

A granivore is an animal that relies on grains and seeds to make up the majority of its diet.

The Gouldian finch has a specially designed beak to help aid in cracking open tough seed shells to get the meat inside. On a typical day, a Gouldian finch will eat up to 35% of its body weight in seeds. Most of their diet consists of various grass seeds.

8. Males court females by showing off their colors

Breeding most commonly happens during the earliest weeks of the dry season. The male Gouldian finch will try to woo their desired female by bobbing about and ruffling his feathers to show off his vibrant plumage.

9. Gouldian finches nest in tree cavities and parent together

When a pair of Gouldian finches decide to mate, they’ll typically construct a nest in the hole of a tree. Common trees used for nesting include Snappy Gum, Northern White Gum and Salmon Gum Eucalyptus. The female will lay between 4-8 eggs and both parents will take turns incubating for up to two weeks. After hatching, the baby Gouldian finches are taken care of by both parents.

Some hatchlings may hatch with unusual markings inside of their mouths. While this looks concerning at first glance, it’s actually an evolutionary phenomenon that stemmed from previous broods surviving a specific parasite. This marking is found in the Gouldian finch as well as some finches native to Africa. 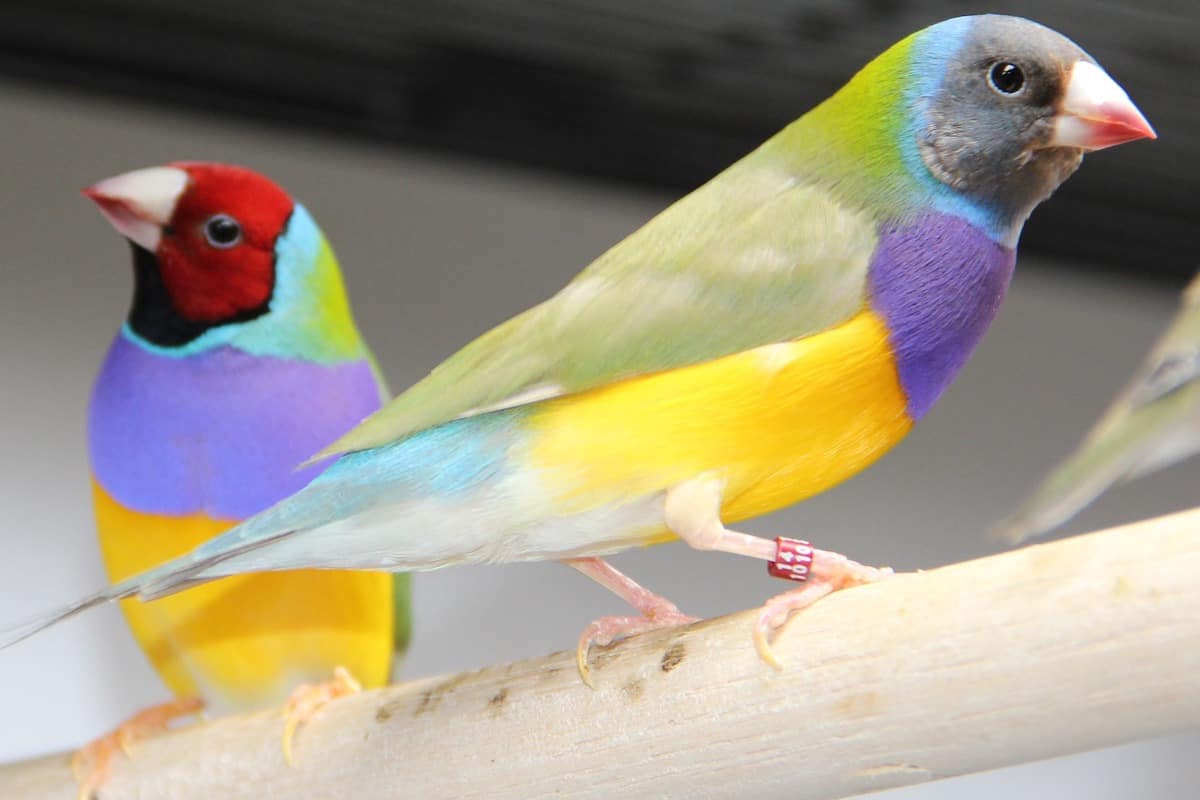 12. Gouldian finches are popular in aviculture

Aviculture is the capture and breeding of birds. Their bright colors, low noise, ability to get along with other finch species and low requirements for care make them popular candidates. Trapping started in 1897 and was legal until 1981. During that time thousands of Gouldian finches were exported each year, but that practice is now illegal.

13. Many colorations can be found in captivity

Due to the years of export and breeding in captivity, many countries still poses large communities of Gouldian finches. These captive breeding programs have resulted in many color mutations.

You can still find Gouldian finches for sale as pets from certain breeders. On the plus side, they are relatively quiet, beautiful to look at and don’t require a lot of exercise. However because they are so social, they will require at least one companion bird, a large cage, and they are shy with humans. They don’t like to be handled and aren’t known to strongly bond with people.

15. The Gouldian Finch species is endangered

In Australia, the Gouldian finch is considered endangered, with an estimated national wild population of 2,500 mature birds. The Australian Wildlife Conservancy protects some of the larger remaining populations, and researches ways to improve their numbers. Some of the main threats facing them today are wildfires during the late dry season and feral herbivores (pigs, horses, etc). Both of these issues affect the availability of their main food source, grass seed.