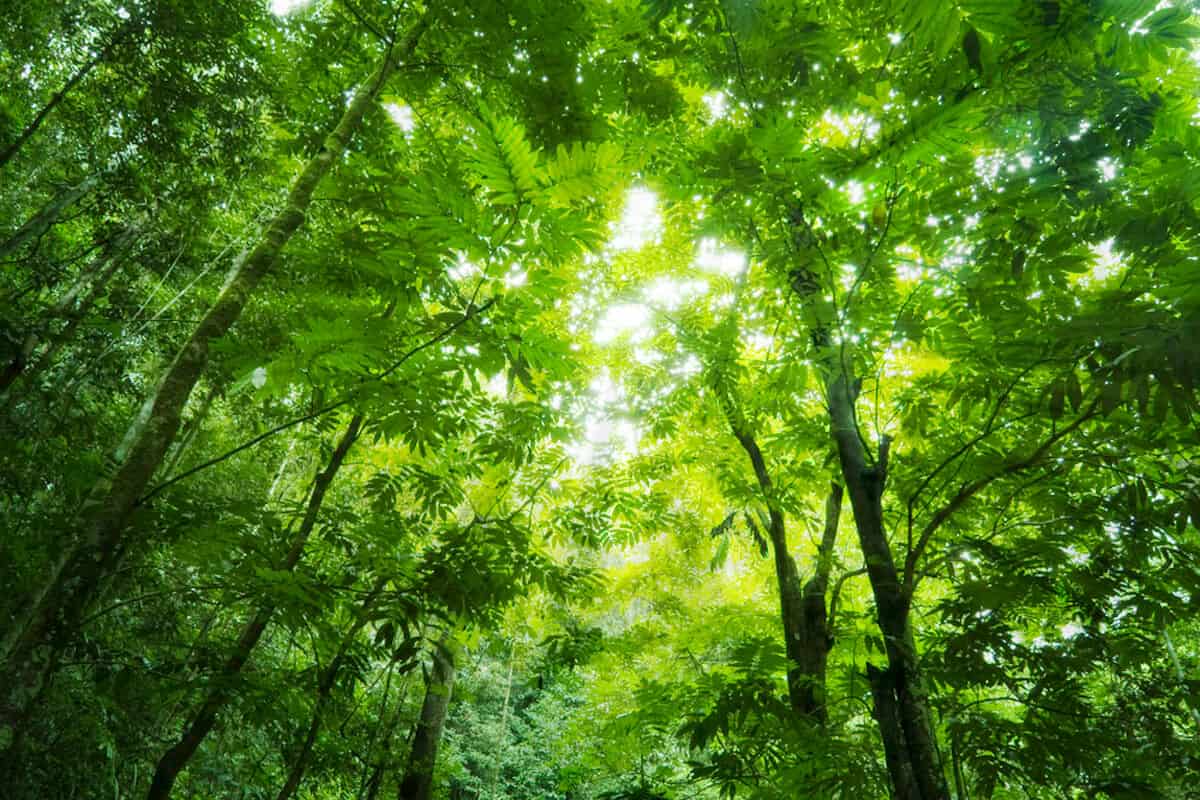 Birds of Paradise get their fantastical name from their location – the colorful, vibrant jungles of southeast Asia. These birds were given their current-day names in the 19th century by European explorers and colonists who trekked into the tropical jungles. An exotic mix of bright colors, funky feathers, and unmistakable calls, birds of paradise are impossible to miss. Let’s learn about one of these fascinating species with 12 facts about Wilson’s bird of paradise.

12 Facts About Wilson’s Bird of Paradise

Indonesia is comprised of thousands of islands, both large and small. On these islands, hundreds of species of birds-of-paradise exist. One such bird is the Wilson’s bird-of-paradise.

It lives in just two places – Waigeo and Batanta islands. These islands are near western Papua New Guinea.

The topography of Waigeo and Batanta provide a mixture of hills, forest, and open woodlands. Since the Wilson’s bird-of-paradise relies on forest to complete its mating ritual and provide fruit, their range is limited to areas with significant numbers of trees.

2. Males and females are sexually dimorphic.

Sexual dimorphism is a phenomenon when the male and female of the same species look different. Males might be bigger, stronger, more colorful, or have especially complicated songs. Females find certain traits more attractive – such as curlicue tail feathers – and mate with the males with the curliest ones. This increases the population of males with curly tails over time.

The Wilson’s bird-of-paradise is a clear example of sexual dimorphism in action. Males have a bald patch of skin on top of their head that is a bright, turquoise blue. Below this on the back of their neck is a bright square of yellow, followed by red down their back and on their wings, and blue legs. Their iridescent green chest feathers can be extended and flashed during displays.

Females share the same blue head patch and blue legs, but their body is a neutral reddish-brown.

In the wild, birds-of-paradise have a short lifespan. They are lucky if they survive for five to eight years. In captivity, however, they can live to be up to three decades old!

This is probably because birds-of-paradise are prey animals. Wilson’s bird-of-paradise is a small bird that is eaten by a variety of predators, such as snakes.

In the process of impressing potential mates, males developed exaggerated and flamboyant tail feathers. Some naturalists liken the feathers to a handlebar moustache.

These feathers serve no function except to woo females, which are more likely to mate with males who have the curliest tail feathers. Their tail is also iridescent, so by wiggling it around it will flash a blueish-white in the light.

You’ll have no difficulty spotting a Wilson’s bird-of-paradise in the jungle. Just look for the characteristic split, spiral curled tail.

5. They eat fruit and insects.

Not much is known about the behavior of the Wilson’s bird-of-paradise, but scientists do know that this small bird eats fruit and insects. They rely heavily on the fruit of trees in the Indonesian rainforest, where the growing season lasts year-round.

Insects and arthropods make up a substantial portion of their diet as well. They obtain both protein and carbohydrates from their omnivorous diet.

6. Females do most of the work to build a nest and raise chicks.

Females spend most of their time raising their chicks. Males don’t contribute to rearing the young. Instead, they mate with multiple females and then defend the territory the females live on.

Females build nests on their own, but little is known about their incubation and their preferences. They are not a well studied species of the birds of paradise.

7. Males and females meet up twice per year.

Mating seasons occur twice per year in the tropical forests of New Guinea and Indonesia. The first mating season is between May and June. The second one is in the fall, in October.

During mating seasons, males spend most of their time cleaning up a dance floor for their display dance. They are meticulous about cleanliness and they will remove leaves, twigs, and anything that gets in the way of a clean open space on the forest floor. This blank slate is important to display all their colors and dance moves, which we will talk about more below.

Wilson’s bird-of-paradise is a solitary bird. Males and females get together just twice per year to mate. In the non-breeding season, the birds rarely cross paths in the wild.

A few things are known for sure:

– Wilson’s bird-of-paradise practices polygyny. This term means that one male mates with as many females as he can. This help him ensure his genetics are spread. The females select the male based on their impression of his display and attempts to woo her.

– Despite the male Wilson’s bird-of-paradise’s many colors, scientists believe that the light green color of his throat is what most spurs females to choose their mate.

This color green is on the inside of his mouth – it’s only visible to the female if she sits and waits on a branch, facing downward, while he dances below and lifts his beak to the sky.

9. It has multiple names.

This bird has been given names by the European explorers who first made it known to the West as well as native Indonesian people.

The name “Wilson’s bird-of-paradise” originates from the original purchase of this specimen by Napoleon’s nephew. The man the nephew purchased it from was named Edward Wilson.

In Malay, Wilson’s bird-of-paradise is called “the bird of the gods,” which is pronounced “manuq dewata.”

10. The male woos the female by clearing a ‘dance floor’ and putting on a show.

The thick tree canopy of the jungle means not much light reaches the forest floor. In order for the males colors to stand out, he has to make sure he is the most colorful object. He will prepare for mating season by choosing a small patch of ground, typically under a spot in the canopy where some light is shining through. Then he will spend time meticulously removing every leaf and other materials until the spot is bare forest floor with some bare branches surrounding.

Now that the stage is ready, he perches nearby and calls until a female hears him and comes over to investigate. An interested female will perch above the male, looking down on him. From below, the male will flash his green throat feathers and open his mouth to reveal the bright colors within. This angle of the female above and male below allows him to catch and reflect the most light, displaying his colors as brightly as possible.

Watch this process in action, caught on film by BBC’s Plant Earth series:

11. Wilson’s bird-of-paradise is threatened by logging and development.

Logging in the forests of Indonesia threatens the habitat and landscape of the Wilson’s bird-of-paradise. Since these birds rely so much on trees to provide food sources, nesting areas, and mating dance locations, they are likely to die off without the rainforest.

They’re even more vulnerable because they live on just two islands – Waigeo and Batanta.

Current metrics rank them as “Near Threatened” in the IUCN watchlist. Scientists are keeping an especially close eye on populations and the forests of the mountain foothills.

Males call to defend their territory and communicate with other Wilson’s birds-of-paradise. Their call is a gentle downward note, which they make in repeated groups of five or six.

Females don’t call as often as males. Not much is known about the vocalizations of the female.