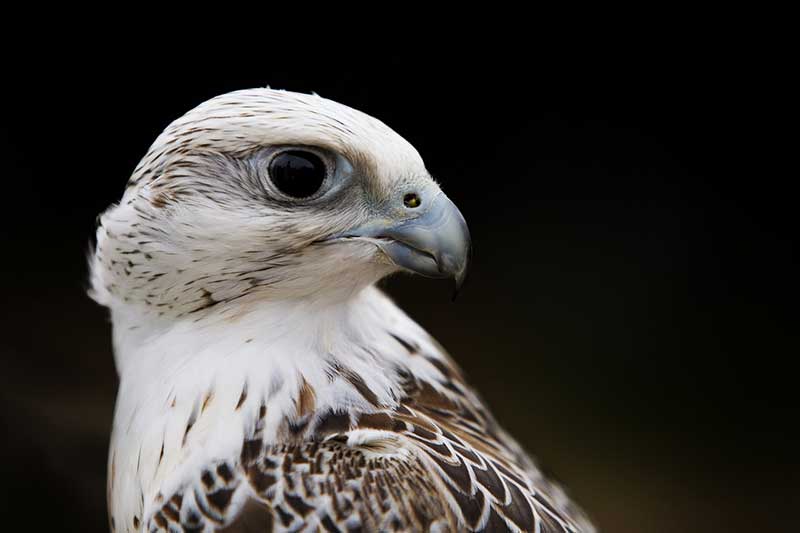 California is home to dozens of birds of prey including owls, hawks, falcons, and eagles. When it comes to falcons in California, there are just 4 species. In this article we’ll take a look at these raptors and learn a few things about them such as where and when you can spot them, what they look like, and a few fun facts about each.

4 species of falcons in California

The 4 species of falcons in California are the American Kestrel, Merlin, Peregrine Falcon, and the Prairie Falcon.

The American Kestrel is North America’s smallest falcon, but don’t let that fool you. Kestrels are fierce predators that can take down other birds as big or bigger than they are, such as Northern Flickers. They primarily feed on insects and invertebrates, but also eat small mammals and other birds.  They can be found throughout California all year, however some kestrels that live further south may migrate north to breed.

These tiny falcons have small heads and beaks as well as some beautiful markings, especially the males with their blue wings and brown spots. Both male and female of this species have dark vertical stripes on their heads and are very pretty birds. Look for them in the summer when they are most active on fence posts and telephone wires when driving, especially when out in the country or rural areas.

Merlins are another small falcon in California. They are found throughout the state in the winter and non-breeding season, but are migratory birds and fly north to Canada to breed each year. Their primary food source is other birds and are known for hunting in pairs allowing them to be extremely effective hunters. Merlins are slightly larger than kestrels and like kestrels, the females are larger than the males.

Peregrine Falcons can be found throughout California. They are mostly found in the winter, but can be found year-round near the coast. Many Peregrines migrate far north to arctic regions of Canada and even Greenland each year to breed. At one point in the mid 20th century their population was almost eradicated due to pesticides, they have since made a comeback and are regularly seen in the wild.

Peregrines are not only the fastest bird, but the fastest animals on the planet reaching speeds of well over 200 mph when diving for prey. Some sources claim up to 240 mph. They can be found in many National Parks in the United States including the Great Smoky Mountains, Yellowstone, Acadia, Rocky Mountain, and Zion. There are an estimated 23,000 Peregrine Falcons currently living in the United States.

Prairie Falcons prefer wide open spaces like grasslands and fields where they soar high overhead looking for their next meal which is usually small mammals or other birds. They are found throughout California and the western half of the United States.

Prairie Falcons, like Peregrines, are one of the most popular birds for falconry and hunting. Look for them soaring overhead with a pair of binoculars, or even perched along fence posts or on cliffs. Their brown colors do make them somewhat camouflaged and difficult to spot sometimes. Prairie Falcons are larger than a Merlin, but slightly smaller than a Peregrine Falcon.