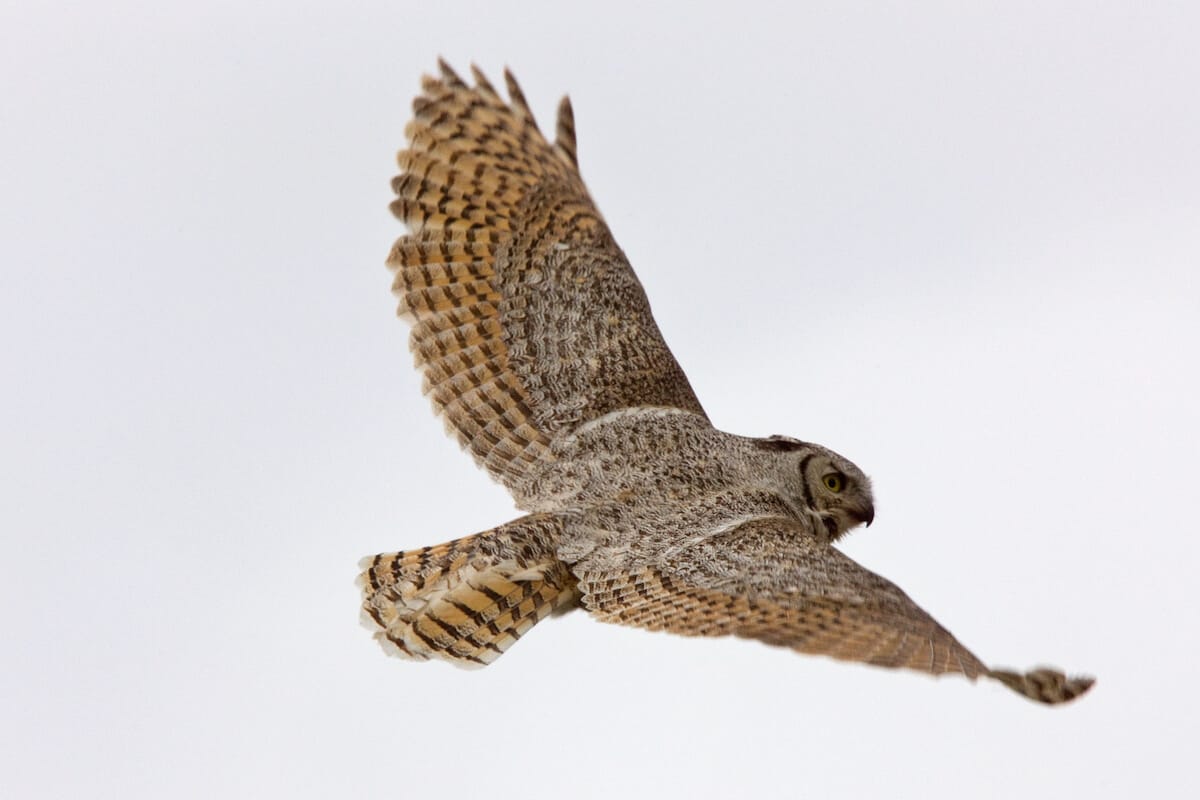 Great horned owls are beautiful and common owls in North America. Their brown, patterned feathers give them excellent camouflage for blending in with forests they call home. In this article we take a closer look at great horned owl feathers, including how to identify them and some of their unique characteristics.

Great horned owls are covered in heavily barred and patterned feathers. This striping and mottling help them to expertly blend in with tree bark. Two fluffy “ear tuft” feathers stand up from the top of their head that make up their namesake “horns”.

Great horned owls can range in color from gray to warm brown. They have yellow eyes, and a V-shaped forehead. There is usually a tuft of white along the throat, with small, delicate barring along their lighter colored belly. Their wings and back have a darker and heavier pattern.

Here are some examples of great horned owl wing feathers, both primary and secondary.

Primary feathers are found at the end of the wing, making up the wing tip and the first few feathers after the tip. These are the largest of the flight feathers and are responsible for propelling the bird through the air. Great horned owls have 10 primary feathers per wing, which is common for most birds.

The tail feathers (rectrices) are the feathers extending from the rump. Typically birds have 6 pairs of feathers on the tail, and this includes great horned owls who have 12 total tail feathers. Birds use tail feathers like a ship’s rudder to steer. They can also spread to act as a landing brake.

As you can see in the pictures above, each tail feather seems to vary slightly from the others, adding to the great horned owls overall camouflage.

Great horned owls are sexually monomorphic, which means both males and females have the same physical appearance. So there is no difference between male and female great horned owl feathers.

Tail feathers are around 18-22 centimeters. Primary wing feathers range from about 24-31 cm, with secondaries between 18-22 cm.

What does finding a great horned owl feather mean?

Many people view an encounter with an owl, even just a feather, to have a symbolic meaning. Owls have long been associated with wisdom, and could bring a message of using your own intelligence to solve a problem. Dig deeper and investigate before you jump to emotional conclusions.

Their large eyes also seem to see through everything, symbolizing truth and honestly. Seeing an owl feather can be a message to stay true to yourself and follow your own path. Don’t let others sway you with negative comments.

Their association with the nighttime often lead to beliefs that owls were gatekeepers to other realms, especially those associated with the afterlife. In this way owls can symbolize messages from those who have passed on, as well as being indicators of psychic and clairvoyant ability.

Is it illegal to have a great horned owl feather?

Yes. According to the migratory bird treaty act, “the possession of feathers and other parts of native North American birds without a permit is prohibited.” This includes feathers you find on the ground, that fell off the bird during molting or a dead bird you may come across. There are some exceptions for birds that are legal to hunt and for use by Native Americans, but for most of us, we are not allowed to keep great horned owl feathers.

Why not? The theory behind this law is the protection of wild birds. If people can make money selling bird feathers, whether for fashion or crafting or any other reason, that puts the birds in danger.

For example, snowy egrets were nearly hunted to extinction in the late 19th century because their showy white feathers were a favorite in ladies hats. By not allowing anyone to possess bird feathers for any reason, it helps protect birds from being killed or inhumanely farmed.

1. Nobody really knows why they have ear tufts

There isn’t really a consensus as to why great horned owls have those two feathers that stick up from their head. Some think it is for display, communication between owls, or camouflage. While there isn’t a lot of evidence, another theory is that those feathers help them to hear better by somehow trapping and sending more sound down into their ear holes.

2. Their face feathers help them hear

The feathers on the face, around their eyes, are short, flat and create a disc shape. This disc actually collects sound waves and funnels it to the owls ears. When you see them moving their head around, they aren’t just trying to see something, but are also using their face like a satellite dish to listen for prey.

Instead of going for extreme speed like a hawk or falcon, owls rely heavily on the element of surprise when hunting. They can hear extremely well, helping them locate prey even in the dark.

In order to continue to hear their prey and pinpoint its location while sneaking up on it, owls needs to approach by stealth. The leading edge of an owl feather is comb-shaped, while the trailing side has a wispy fringe. This makes them slightly less aerodynamic, but cuts out nearly all of the sound from air turbulence passing over and through the feathers. Unlike other birds, when an owl flaps its wings you won’t hear that “swooshing” sound.

Feathers are delicate structures that eventually degrade from daily wear and tear. Owls will molt and replace their feathers once per year. This typically happens after the owls are done raising their young for the year and all the fledglings have left the nest.

They need their feathers to fly and hunt of course, so they can’t drop them all at once. Molting will take place over about a three month time period. They will only molt a few of their primary and secondary feathers at a time, so ensure they still have enough power and control in their wings to be effective hunters.

5. They have different coloration depending on region

In general, great horned owls from the western and southern parts of the country often appear darker and grayer, while owls from the north and east are often more tawny or cinnamon brown. However this can vary even locally, with plumage coloring more closely matching the colors of the forest the owls are living in.

Owls and hawks are both similar looking birds of prey. While it can be difficult to tell their feathers apart, there are a few key things you can look for to help you differentiate between the two. While the specifics can vary from species to species, here are some general tips.

1. Owl feathers are fringed along the edge

As we mentioned above, owls are built for silence and this is reflected in their feather construction. If you are able to look at the feather up close, you will see the back edge of the feather has a wispy, fringy appearance to it.

2. Hawk feathers are smoother along the edge

Hawk feathers are also built to muffle some sound, over their main focus is speed. In comparison to an owl feather, the edges will be smoother with less of a frayed look to them.

In general, the primary wing feathers on an owl will have an oval shape. There is only a slight point to the tip, with an overall rounded tip shape.

In contract, a hawks primary feathers will often appear more elongated. They will appear more narrow, especially towards the tip of the feather.

This tip is pretty subtle and helps more if you are trying to tell two or more feathers apart. But in general, the patterns will be a bit more intricate, and coloring more bold, on owl feathers. Owls rely slightly more on blending in with their surrounding and hiding in plain sight than most hawks, so their feathers have a slightly better camouflage. Hawks still have barring and stripes, but for many their coloring tends to be more uniform.