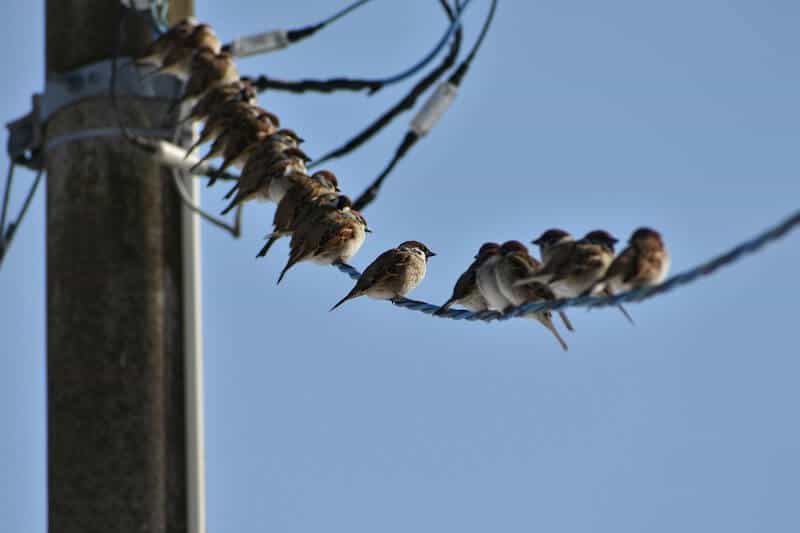 How many times have you seen birds sitting on the power lines running alongside the road? An image may come to mind of a whole row of pigeons or doves happily lined up along a wire. We’ve always been told never to touch an electrical wire because we will get zapped, and know that electricians have to go to great lengths to ensure their safety. So how do birds sit on power lines without getting electrocuted? They seem to be just fine hanging out on the wires all day, what’s their secret?

How do birds sit on power lines without getting electrocuted?

To put it simply, birds can sit on electric wires for two reasons: their bodies are poor conductors of electricity, and they are only touching the wire, not creating a circuit with another low voltage object.

Let’s dig deeper into these two statements. Don’t worry, we will keep this easy to understand.

For example, wood is a very poor conductor of energy, which is why you will see many poles that hold up electrical power lines are made of wood. Copper and most metals are good conductors, through which electricity flows easily. In some instances, a non-conductive substance can be used to insulate against the power of the electricity.

Electric wires are made of copper, because electrons can flow through copper very easily. Birds’ bodies, however, are poor conductors of electricity. All the cells and bones and tissue in their body don’t conduct electricity well, certainly not as easily as a copper wire.

sElectricity is going to follow the path of least resistance. This means, the path that requires the least amount of energy to travel along. So one of the reasons the bird remains unaffected by the electricity is because the electrons are going to continue to travel along the path of least resistance, which is the highly conductive copper wire and not the poorly conductive bird. 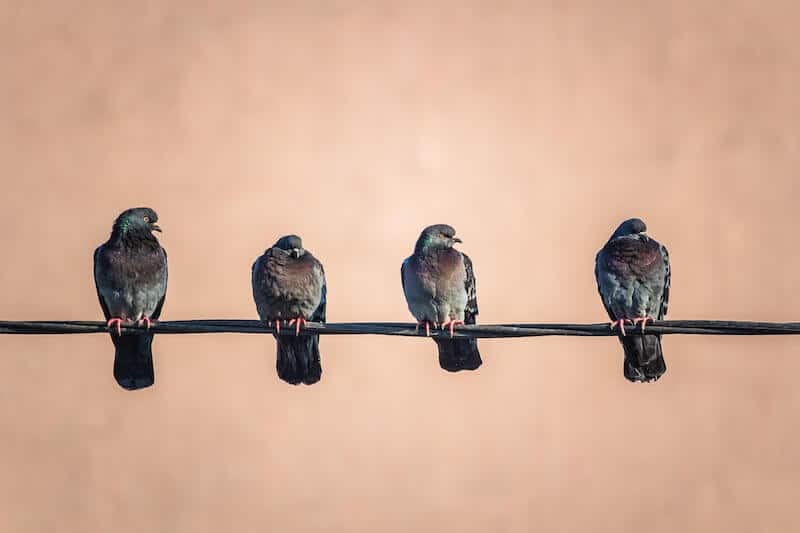 Energy Moves From High to Low

How conductive or not the birds body is, is only half the story. Electricity is also looking to travel from high voltage to low voltage (high energy to low energy). Similar to how water will always flow downhill, and a hot cup of coffee will always cool, without outside interference electricity will want to flow from high to low voltage. In the case of birds on the wire, the area of low or no voltage is the ground. So the electrons are also looking for a way to get from the high voltage wire, to the low voltage ground.

However, if the bird had one foot on the wire and one foot on another object with lower voltage, then it is creating a bridge where the energy will want to flow.

Electrocution is injury (or even death) that occurs when a lot of energy passes through the body. If the bird were to have one foot on a power line, and the other foot on the ground or a second wire that had a lower voltage, the electrons would use the bird’s body as a bridge. Even though we said previously that overall the body of the bird is a poor conductor, energy will still readily travel through the body if it is a path to an object of lower voltage.

So birds can indeed be electrocuted if they are not careful to keep both feet on the same wire.

However since we cannot fly, this is usually not possible for us. If a human has to work on a power line they will typically have to climb up a pole or use a bucket truck or ladder. They will also have to use tools and will probably be touching many other objects than just the line. So they must be extremely careful to either turn the power off to the area they are working on, or make sure they are covered in and surrounded by insulating materials (like thick rubber) that will not allow the electricity to flow into their body.

The danger of power lines

Most power lines use copper wire, because it is such an efficient conductor. However you can tell if you’ve ever looked at one, that no power line is just an exposed piece of copper wire. A bare wire would be much too dangerous. All power lines are insulated with a plastic or rubber cover.

This doesn’t mean that power lines are actually harmless or that the electricity can’t get through that coating. The current can still affect you if you touch them. The best thing to do is to think about any power line as being potentially dangerous and to avoid touching them at all.

When you see a bird sitting on a power line, it is not likely to be zapped by the electricity. As long as both feet are sitting on the same line and they aren’t touching anything else, the electricity in the line has no reason to pass through their body.

This doesn’t mean birds are impervious to electrocution. As we discussed, if they make a wrong move they can be shocked and killed just like we would if we did not handle power correctly. They just happen to be sitting in the safest possible spot! Maybe they are smarter than we realize, or just pretty lucky.