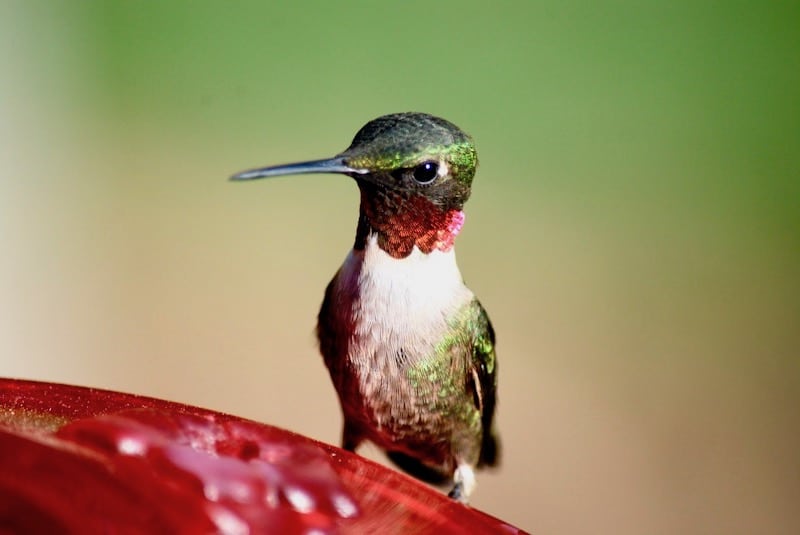 Based on the range maps of authoritative sources like allaboutbirds.org and ebird.org, we’ve put together a list of hummingbirds that can be seen in the state of Missouri. For each species in this list you’ll find the species name, pictures of what it looks like, specifications about appearance, and where and when you may be able to spot them. We will list the most common species first, and the 3 rare ones last.

Ruby-throated hummingbirds are seen throughout Missouri during the spring and summer months. They are by far the most common hummingbird in the state. Ruby-throats will arrive in April and May and leave in September.

Sightings of the rufous hummingbird have been made throughout Missouri. They are much less common than the ruby-throat, but there is usually at least one sighting in the state each year.

Anna’s very uncommon on the east coast, but they do stray from time to time. There have been a few recorded sightings in Missouri over the years, so it’s not impossible for an Anna’s to wander into the state.

The calliope hummingbird winters in Central American, then mainly spends its breeding season in the Pacific Northwest and parts of western Canada. That’s an impressively far migration, especially considering the calliope is the smallest bird in the United States! Males have a unique throat pattern of magenta stripes that fork down on the sides. Females are plain with some green spotting on the throat and peachy tinted underparts.

Calliope Hummingbirds are considered quite rare on the east coast, however they have been spotted in many states outside of their range. I could only find two recorded sightings in Missouri, interestingly both were in November. So it would seem the occasional winter vagrant is possible.