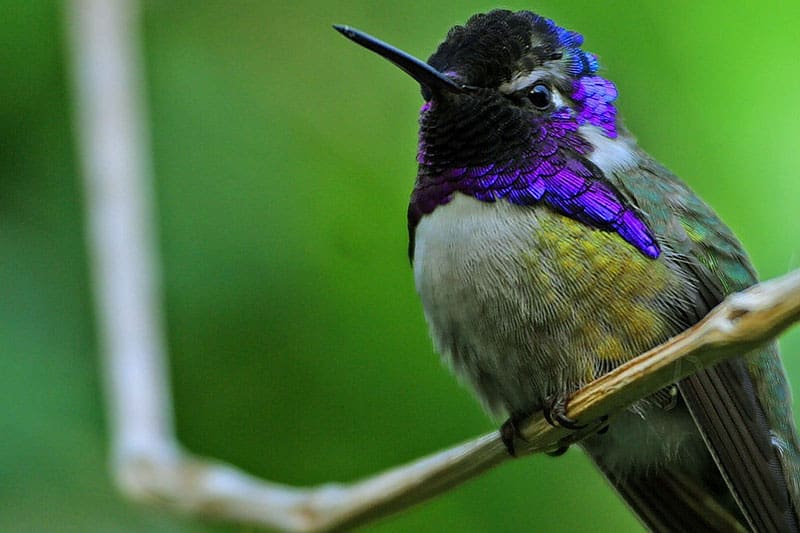 Based on the range maps of authoritative sources like allaboutbirds.org and ebird.org, we’ve put together a list of hummingbirds that can be seen in the state of Nevada. For each species in this list you’ll find the species name, pictures of what it looks like, specifications about appearance, and where and when you may be able to spot them. We will list the more common species first.

Broad-tailed hummingbirds love the mountains and breed at elevations above 6,000 feet. They occupy mountain habitats such as pinon-juniper, montane riparian, wet meadows and open mixed conifer. Males have a rosey-magenta colored throat. Females have some green spotting on their throat and cheeks, and buffy colored sides. In Nevada, their favorite flowers for nectar include Indian paintbrush, red columbine, scarlet mint and sage.

Broad-tailed hummingbirds will start to show up in southern Nevada in April, and mostly be gone from the state by September. Some good places to find them are the Ruby Mountains, Toiyabe National Forest and the canyons around Las Vegas.

Black-chinned hummingbirds migrate north from Mexico and Central America each year and breed in the western United States. Males throat color looks plain black in most light, however they do have a small strip of purple feathers along the bottom that is sometimes visible. Females appear like most hummingbird females green above and pale below with a plain throat.

They are widespread among many habitats, and in Nevada like areas associated with water such as canyons, gulches, open woodlands and riparian corridors. They also will inhabit urban areas where flowering trees, plants and backyard feeders can be found.

Look for black-chinned hummingbirds throughout Nevada from April to September.

The calliope hummingbird mainly spends its breeding season in the Pacific Northwest and parts of western Canada, but can be spotted in Nevada during the spring and fall migration. This is an impressively far migration, especially considering the calliope is the smallest bird in the United States! Males have a unique throat pattern of magenta stripes that fork down on the sides. Females are plain with some green spotting on the throat and peachy tinted underparts.

While many calliope hummingbirds only pass through Nevada during migration, there are some that stick around in the summer in far northern parts of the state. You may be more apt to spot one during the fall migration since they stick closer to the Pacific in the spring.

Rufous hummingbirds are known for being very “feisty” when it comes to sharing feeders and chasing off other hummers. Males are orange all over with a white patch on the upper breast and an orange-red throat. Females are green with rusty patches and a speckled throat. In the spring they migrate up through California, then summer in the Pacific northwest and Canada, even as far as parts of Alaska! In summer they begin to head back south not just along the Pacific but also the Rocky Mountain area.

Rufous hummingbirds just pass through Nevada during migrations and do not nest in the state. While some may pass through in the spring, keep an eye out for them in summer as they tend to travel south over Nevada during this time.

Anna’s actually stay in the U.S. all year within most of their range, which it Arizona, California, Oregon and Washington. The green of their feathers tends to be a bit brighter and more iridescent than most others, and even their chest and belly are sprinkled with emerald feathers. Males have rosy-pink throats and those colorful feathers extend up onto their forehead. They are happy in backyards and love gardens and eucalyptus trees.

Anna’s in Nevada tend to be seen along the western edge and southern tip of the state. They remain year-round in some urban areas such as Las Vegas, Carson City and Reno, which would all be good areas to spot these pink beauties.

Male Costa’s are known for their deep purple faces. They have a splash of purple on their foreheads as well as their throat, with purple feathers flaring out on both sides like a mustache. Females are green above with white below. Costa’s are compact and compared to other hummingbirds have slightly shorter wings and tail.

Some of their favorite nectar producing plants are ocotillo, chuparosa, honeysuckle, desert lavender, thornbush and New Mexico thistle. In the desert they nest early in the year beginning late January to April.

These hummingbirds enjoy desert habitat and can be found in Nevada in the southern part of the state along the northeastern Mohave Desert where some will breed. During the non-breeding season they may be found scattered in other areas of Nevada, mainly in western areas of the state.

Some costa’s may stick around all year in the south, with Las Vegas and the immediate areas surrounding it a great place to try and see one.

Broad-billed hummingbirds are mainly found in Mexico, however they do cross the border into the U.S. The only two states in the U.S. where the broad-billed hummingbird is known to breed are Arizona and New Mexico. Males are hard to mistake with their purplish-blue throat and blueish-green belly. They also have an orange beak with a black tip. Females are a washed out green above and grayish below with the typical black beak.

While broad-billed hummingbirds are considered rare for Nevada, they sometimes are spotted in the southern tip of the state. There are only a handful of recorded sightings on eBird, and they occur at all times of year.