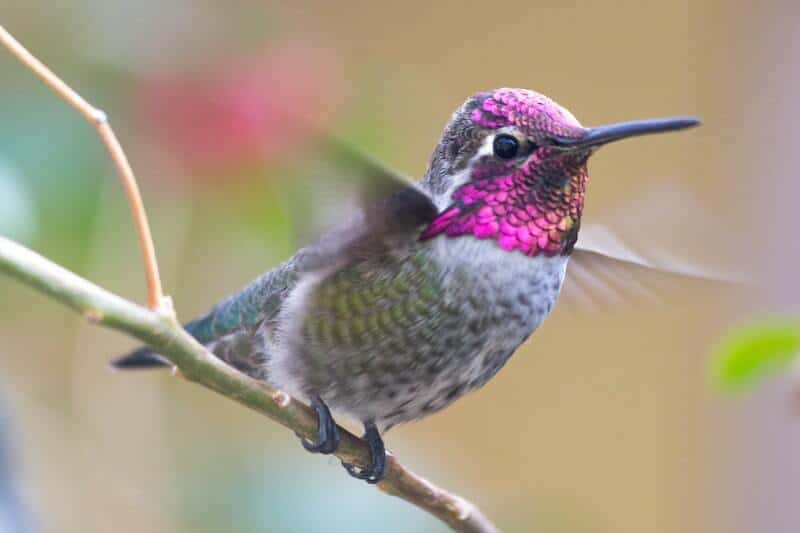 Based on the range maps of authoritative sources like allaboutbirds.org and ebird.org, we’ve put together a list of hummingbirds that can be seen in the state of Oregon. The most common Oregon hummingbirds are black-chinned hummingbirds, Anna’s hummingbirds, rufous hummingbirds and calliope hummingbirds. For each species in this list you’ll find the species name, pictures and specifications about appearance, and where and when you may be able to spot them. We will list the 4 more common species first, and the 5 less common ones last.

Look for black-chinned hummingbirds throughout Oregon from spring to fall, although they are more frequently seen in the central and eastern portions of the state. In many spots they will be easiest to spot during spring or fall migration.

The calliope hummingbird mainly spends its breeding season in the Pacific Northwest and parts of western Canada, but can be in many western states during the spring and fall migration. This is an impressively far migration, especially considering the calliope is the smallest bird in the United States! Males have a unique throat pattern of magenta stripes that fork down on the sides. Females are plain with some green spotting on the throat and peachy tinted underparts.

Some calliope hummingbirds only pass through Oregon during migration on their way further north, while some will stick around for the summer. In general eastern portions of the state will see most of them migrating through, they will stick around in central Oregon, and are more scarce along the western coast.

Rufous hummingbirds can commonly be seen throughout Oregon, and they will stick around all summer to breed.

Anna’s actually stay in the U.S. all year within most of their range, however you’ll only find them in a few of the western states, including Oregon. The green of their feathers tends to be a bit brighter and more iridescent than most others, and even their chest and belly are sprinkled with emerald feathers. Males have rosy-pink throats and those colorful feathers extend up onto their forehead. They are happy in backyards and love gardens and eucalyptus trees.

Anna’s are found year-round throughout the west coast of Oregon, as well as central Oregon north of Bend. In central Oregon south of Bend, they tend to only stick around for the breeding season then leave in the fall. They are much less common in the eastern half of the state.

While considered rare in Oregon, there are still sporadic sightings of them in the state. Most of the recorded sightings I saw were in the western portion of the state.

These tiny guys fly all the way from Central America to breed along the Pacific Coast in California each year. They have very similar coloring to the Rufous hummingbird so it can be tricky distinguishing the two. Allen’s males are orange with a green back and orangey-red throat. Females have a speckled throat with dull green back and brownish-orange flanks. They migrate quite early compared to other hummingbirds, heading for California in January. This also means they can start to head south earlier as well, sometimes in May or June.

Allen’s are only common along a tiny strip of coast in the south of Oregon. Generally along the coast from the southern border up until Langolis. They are mostly absent from the rest of Oregon. Look for them starting in February and leaving in June or July.

Broad-tailed hummingbirds are short term visitors in the U.S. so look for them between May and August in meadows and forest clearings.

While fairly common in neighboring Idaho, broad-tailed hummingbirds aren’t very common in Oregon but they do occasionally cross the border and wander into the state. Some spots that have a few recorded sightings are Fremont National Forest and Steens Mountain Wilderness area.

Ruby-throated hummingbirds are seen only sporadically throughout northwestern states like Oregon. They are considered quite rare for the state and there are very few recorded sightings.

Broad-billed hummingbirds are considered quite rare for Oregon and I could only find a couple of recorded sightings, both in the eastern part of the state.