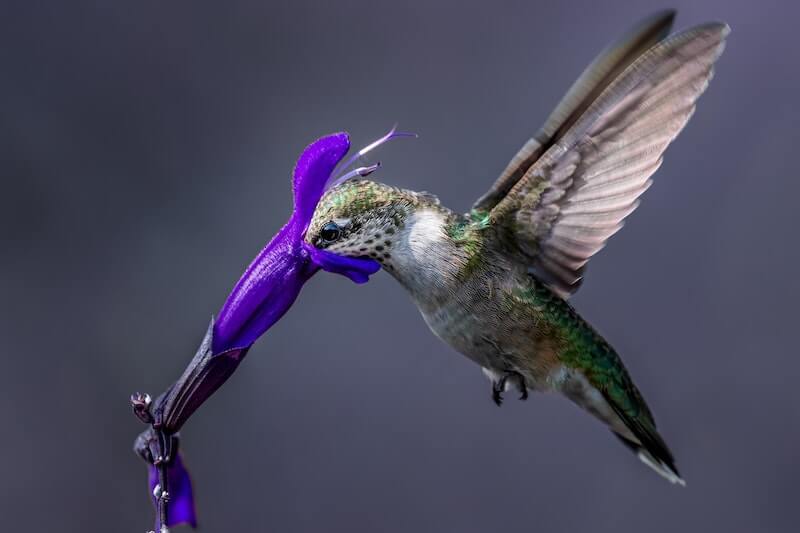 Based on the range maps of authoritative sources like allaboutbirds.org and ebird.org, we’ve put together a list of hummingbirds that can be seen in the state of Utah. The most common Utah hummingbirds are black-chinned hummingbirds, broad-tailed hummingbirds, rufous hummingbirds and calliope hummingbirds. For each species in this list you’ll find the species name, pictures and specifications about appearance, and where and when you may be able to spot them. We will list the 4 more common species first, and the 5 less common ones last.

The calliope hummingbird winters in Central America, then mainly spends its breeding season in the Pacific Northwest and parts of western Canada. They can also be seen in many western states during the spring and fall migration. This is an impressively far migration, especially considering the calliope is the smallest bird in the United States! Males have a unique throat pattern of magenta stripes that fork down on the sides. Females are plain with some green spotting on the throat and peachy tinted underparts.

For the eastern and western third of the state, calliope hummingbirds mainly just pass through during migration. However in the central portion of the state some will stick around for the summer. Most recorded sightings on ebird occur between the cities of Provo and Logan. However there are also a cluster of sightings that occur in the southwestern corner of the state in late summer around the national parks such as Zion, Bryce, Dixie national forest and Red Cliffs.

Rufous hummingbirds can commonly be seen throughout Utah, but typically they only migrate through the state. The best time to catch them is during their fall migration back south when they pass through Utah in late July, through August and early September.

Broad-tailed hummingbirds love the mountains and breed at elevations up to 10,500 feet. Males have a rosey-magenta colored throat. Females have some green spotting on their throat and cheeks, and buffy colored sides. One of the best places to spot them are in mountain meadows feeding on the nectar of wildflowers. They are able to endure cold nights by slowing their heart rates and entering a hibernation-like sleep called torpor.

Utah is one of only a few U.S. states where broad-tailed hummingbirds come to breed for the summer. Compared to some other hummingbird species, their time in the U.S. is relatively short. They can be found throughout Utah, so look for them between April and August.

Anna’s actually stay in the U.S. all year within most of their range, however you’ll only find them regularly in a few of the western states like California and Oregon. The green of their feathers tends to be a bit brighter and more iridescent than most others, and even their chest and belly are sprinkled with emerald feathers. Males have rosy-pink throats and those colorful feathers extend up onto their forehead. They are happy in backyards and love gardens and eucalyptus trees.

Anna’s are not commonly found in Utah, however some rare sightings do occur throughout the state. But there is a small pocket in the far southwest of Utah where they do seem to visit somewhat frequently and there are sightings every year. This area includes Zion and the towns around the Red Cliffs National Conservation Area such as Ivin, Santa Clara, St. George and Washington.

While considered rare in Utah, there are still sporadic sightings of them in the state. Most of the recorded sightings I saw were in the southwestern corner in Zion National Park and the area south of Red Cliffs National Conservation Area. It is likely the population of southern Nevada costa’s trickling over the border.

Ruby-throated hummingbirds are seen only sporadically in states west of the Mississippi River. They are considered quite rare in Utah and there are only a few recorded sightings that I saw on ebird.

Rivoli’s hummingbird has been spotted only a few times in Utah making it very rare for the state. This mainly occurs at the southern border with stray rivoli’s from Arizona and New Mexico wandering across state lines.