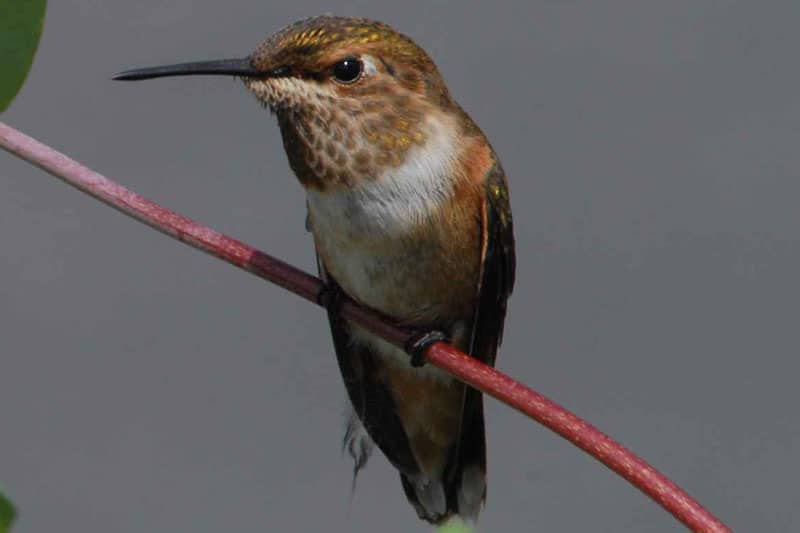 Based on the range maps of authoritative sources like allaboutbirds.org and ebird.org, we’ve put together a list of hummingbirds that can be seen in the state of Wisconsin. For each species in this list you’ll find the species name, pictures of what it looks like, specifications about appearance, and where and when you may be able to spot them. We will list the most common species first, and the 3 rare ones last.

Ruby-throated hummingbirds are seen throughout Wisconsin during the spring and summer months. They are by far the most common hummingbird in the state, and will arrive around May and leave in September. If you see a hummingbird in your yard, it will almost surely be the ruby-throated.

In the spring they migrate up through California, spend the summer in the Pacific northwest and Canada, then zip back down through the Rockies in the fall. While the rufous is considered a hummingbird of the western U.S., they are probably the second most commonly sighted species in the eastern U.S. after the ruby-throated hummingbird.

Recorded sightings in Wisconsin are not enough to be considered “common”, but they have been spotted several times over the years. The majority of reported sightings come from the areas around Madison, Milwaukee and along Lake Michigan.

Anna’s very uncommon on the east coast, but they do stray from time to time. There are a handful of recorded sightings in Wisconsin, mostly around Madison and Milwaukee. So while rare, it’s not impossible for an Anna’s to wander into Wisconsin.

While broad-billed hummingbirds are considered very rare outside of the southwestern U.S. they occasionally pop up in other states. Wisconsin has had just a few recorded sightings, typically in fall or winter in the eastern part of the state.