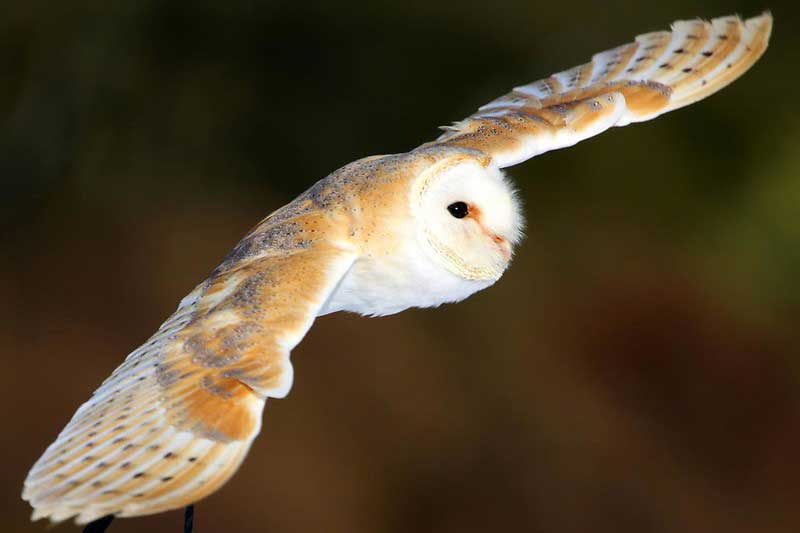 In this article we’ll learn some fun and interesting things about the owls in Alabama, as well as look at some pictures to help you identify them in case you come across one! With a little help, you’ll become that much better at identifying these owls based on their looks, calls, and migratory habits.

The 7 Species of Owls in Alabama

Due to their elusive personalities and nocturnal nature owls can be challenging for newbies and seasoned birders alike to identify. But you’re in luck because we’re going to take a closer look at some of these owls, and you may find that they aren’t quite as similar as they seem at first glance.

The 7 species of owls that you’ll find at various times of the year in the state of Alabama are the Barn Owl, Eastern Screech-owl, Great Horned Owl, Northern Saw-whet Owl, Short-eared Owl, Long-eared Owl, and the Barred Owl.

Let’s take a look at this list of Alabama’s owls so you can see what each species looks like.

These owls are distinct from all other species. They are the sole representors of their Family in North America (the rest on this list are from the family Strigidae or “true owls”.)

Barn Owls are distinguished from the others by their heart-shaped facial disk, serrated central claws, and small(ish) eyes. They have long legs and bare toes. Their wings are rounded and long and their tails are short and square

Their faces and underwings are soft white and are very conspicuous in flight. The remainder of their body can range from buffy cinnamon to yellowish/gold and even rusty. Although females are typically a little darker and larger than males, plumage is pretty similar across ages and sexes.

Barn Owls at strictly nocturnal and won’t make any appearances during the day. They eat up to 4 small mammals a night, including rats, mice, voles, lemmings, and other rodents. They also munch on shrews, bats, and rabbits.

Unlike the Strigids, Barn Owls don’t produce much of a “hoot.” Instead, they scream, hiss, shriek, whistle, and screech. These sounds are more typical of the male, but the female will use a gentler call when begging for food.

These owls can be found year round in Alabama.

Barn Owls go by several names, some of which include Ghost, Demon, Golden, Death, Hobgoblin, Monkey-faced, and Church Owl, just to name a few. Some cultures associate them with bad omens and evil, which might explain why many of these names are eerie and dark.

Eastern Screech Owls have three color morphs—gray, rufous, and intermediate—that usually occur in most populations, but there’s usually one that’s more dominant. In the Southeast, including Alabama, rufous morphs are common.

These morons are more reddish overall, with a black-rimmed facial disk and ear tufts. Their bellies have blotchy streaks and their shoulders are spotted white. Overall, these birds are pretty small—even smaller than their northern morphs—and are roughly a little larger than a starling (but bulkier.)

They can be found year round in Alabama. Suburbs are common locations to find them. Here, they typically have higher rates of fledglings due to fewer predators. Usually, they mate for life, but on occasion the male will stray and mate with a second female. The new girl might kick out the first lady and lay her own eggs in the nest and incubate both clutches.

Typically, this species is heard rather than seen. They have a soft whinnying voice reminiscent of a horse. Training your ears for their sweet voice is the key to identifying them as they have excellent camouflage.

These little birds are quite agile and excellent at catching all sorts of prey of different sizes, including reptiles, insects, mammals, and birds—sometimes even being cannibalistic. When food sources are in good supply, they cache extra food in tree holes for several days.

These large owls are overall pretty grey on top and barred on the belly. They have a conspicuous collar of white feathering and large ear tufts. Their faces are often described as “catlike” in appearance. Regionally, they vary in color. The Eastern variation has cinnamon tones throughout the breast and facial disk.

Great-horned owls are some of the most common owls in North America. Their widespread distribution is attributed to their ability to live in a variety of habitats. This includes forests, grasslands, rainforests, deserts, tundra edges, wetlands, cities, and backyards. They can be found year round in the state of Alabama.

These owls have the distinctive hoo hoo-HOO call one might deem as “classic” in terms of owl hoots. Males and females will sing duets together. Females usually have a higher pitched voice compared to the males.

American Crows can often be seen mobbing Great-horned Owls. This is because crows make good meals, and these owls are their most dangerous predator. If you are looking for a Great Horned, keeping an ear out for awful crow cawing might help lead you to one.

These guys are powerful and fearless. They have a grip strength that requires 28 pounds of force to release—that’s crazy, considering they weigh less than three pounds, themselves! With this super-owl strength, they can take on large prey, like Osprey (they still munch on small meals, like frogs and scorpions.)

Barred owls are mottled brown and white with barring on the tail and wings. Their pale bellies have dark streaking. If you make eye contact, don’t be too unsettled by their pitch black eyes.

These owls love watery areas in a mixed forest. This can include swamps, wooded river bottoms, and uplands. There, they hunt for amphibians, reptiles, mammals, birds, fish and invertebrates. They will perch over water waiting for fish and crawdads, and will even wade into shallow waters to catch something good.

In Alabama these owls can be found year-round. They don’t migrate and like to stick to the same area— they’re big time home-bodies. One banding experiment showed that of 158 birds re-found after being banded, none had moved more than 6 miles away.

If you’re out and about at night and hear a call that sounds like someone saying “who cooks for you, who cooks for you all” it’s likely a Barred Owl. They can be called in relatively easily with mimicry. Unlike many other species, Barred Owls are more likely to be heard during the daytime.

Pleistocene fossils of Barred Owls that were at least 11,000 years old have been dug up in Florida, Tennessee, and Ontario. 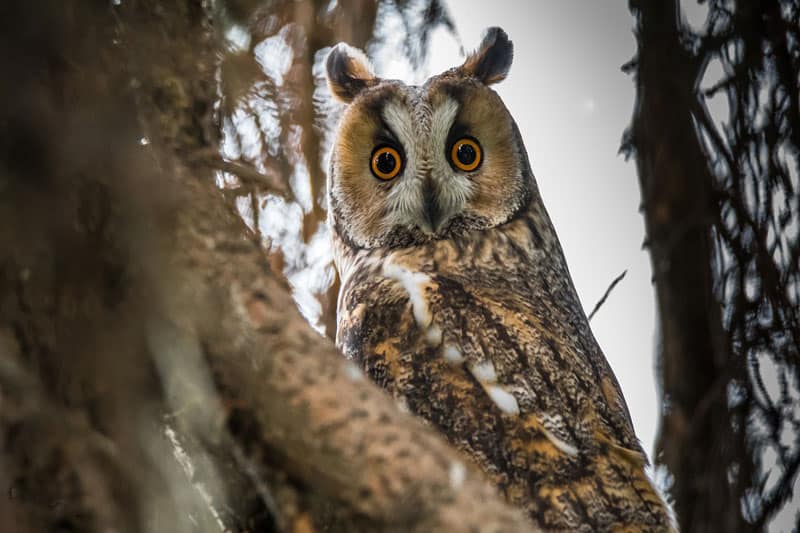 Long-eared Owls spend much of their time much farther north than Alabama, but southernmost part of their range extends into the state.  Their breeding season range goes all the way to Canada, but these birds head south for the winter and that’s when we see them here.

During the winter, these owls tend to roost together in communities.  Their excellent camouflage and penchant for roosting in dense woodlands tends to make them hard to find. They don’t build their own nests, but instead use abandoned ones from other birds.

The sound of a male Long-eared Owl’s hoot travels a great distance and can be heard from almost a mile away.

The Short-eared Owl prefers open ground for hunting, and as well as fields and marshes, can be found at airports. Like their relative the Long-eared Owl, they prefer to breed farther north, but you may spot one in Alabama in the winter.

Even though Short-eared Owls are elusive and hard to spot, they are one of the most widespread owls in the world and can be found in some capacity in every U.S. state, even Alaska and Hawaii.

Northern Saw-whet Owls winter in some of the southern sates, including Alabama. However they’re not very common to see and are listed as having a non-breeding (scarce) range in Alabama according to allaboutbirds.org.  They love forests, and are active and hunt almost entirely at night. This makes them even more difficult to come across.

The Saw-whet Owl may have gotten its name from its call, which sounds vaguely like a saw-blade on a whetstone. Unlike most owls that eat their prey whole, these birds eat adult mice in pieces over the course of two meals.

Once a male Northern Saw-whet Owl has gotten the signal from a female that it’s ok to begin the courtship process, he will circle her about 20 times in flight before landing beside her and presenting a prey item.