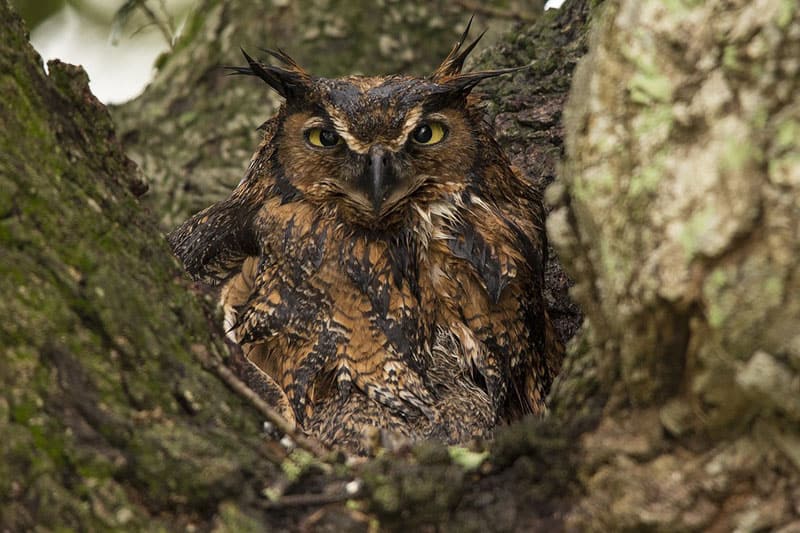 The owls in Kansas thrive in the near-perfect environment the state provides. Its open grasslands and pastures are well-suited to rodents like mice, voles, and other animals that owls love to eat. Any trees, abandoned barns, or other structures can make nice nesting sites for a variety of owls as well. The forested areas in the east of the state also cater to those species that prefer a denser woodland area.

These majestic birds have a few unusual traits. Their eyes are fixed and do not move, but their heads can rotate up to 270 degrees on their necks to give them a wide range of vision. Owls are mostly nocturnal, and can hunt almost silently, swooping down on their unsuspecting prey with great speed.

Owls’ talents in rodent control makes them a welcome addition to many farms. Adding a nesting box to your property is a good way to encourage owls to live in your neighborhood and help keep the small animal population under control.

Here are some pictures and interesting facts about a few species of owls native to Kansas.

8 awesome species of owls in Kansas

Short-eared Owls like to hunt in grasslands and open spaces, where they can perch on the ground or in low trees. They sometimes winter in Kansas, but their breeding grounds are further north, stretching into Canada.

These owls nest on the ground, and have occasionally even taken over abandoned strip mines as a habitat. They also have a long flying range, and have been seen by ships hundreds of miles from land.

Different varieties of barn owls can be found all over the world, and they are resident in every county in Kansas. Some barn owls, especially younger ones, migrate south as the weather gets colder, but others remain in Kansas throughout the winter.

Barn owls calls sound more like screams than hoots. They swallow their prey whole when they eat, and can eat up to 1,000 mice a year. In contrast with many other birds, female barn owls are often more colorful than the males.

The Great Horned Owl is one of the most common owls in North America and is found year-round throughout Kansas. Their habitat is widespread, but during breeding season they prefer places with good nesting sites in trees instead of open grassland.

The call of the Great Horned Owl is the stereotypical hooting that most people associate with owls. Because of its larger size and very strong talons, its food includes larger animals such as rabbits, snakes or even hawks and other birds of prey.

Kansas is on the very western edge of the Eastern Screech-Owl’s range. This pint-sized bird stays in its habitat year-round, nesting in tree hollows or other small spaces, and usually sticks to heavily-wooded areas.

Well-camouflaged in the trees, you can often only hear these owls rather than seeing them. Eastern Screech-Owls often mate for life. They regurgitate the bones, fur, and feathers of prey in pellets after eating and discard these outside of their nest.

The Burrowing Owl likes open prairie and pastures, often using burrows of prairie dogs or ground squirrels for their nests. During the breeding season their range extends into western Kansas, but the habitat for these owls is dwindling, in part due to a lack of prairie dog burrows to nest in.

Because they live underground, Burrowing Owls have a high tolerance for carbon dioxide. Before laying eggs, they sometimes put animal dung around the entrance to attract insects for food. They also store food for later inside their burrows in caches that can become quite large.

Barred owls like to nest in dense forested areas, and for this reason are found mainly in the far eastern parts of Kansas. April and May are the best months to hear them calling, and occasionally their habitat in the state will spread a bit further west into south central Kansas as well.

Some people think that the call of the Barred Owl sounds like “Who cooks for you? Who cooks for you all?” Often nesting pairs will call back and forth to one another. Their main predators are Great Horned Owls, who are larger and more aggressive than the Barred Owls are, and who will attack them if the smaller owls are in their territory.

Long-eared Owls like grasslands and pastures to make their homes, enjoying the multitude of small mammals there. Some of them even winter in Kansas, but fly further north during their breeding season.

These owls use nests abandoned by other animals instead of building their own. They are well camouflaged, and their hooting calls can be heard for up to a kilometer away. Long-eared Owls swallow their prey whole and regurgitate up the non-digestible bits in pellets.

While Northern Saw-whet Owls generally prefer forests, they sometimes live in more open habitats as long as there are suitable nesting sites around. Kansas is at the southerly end of their range during the non-breeding season.

The tooting call of the Saw-whet Owl may have given rise to its name, which sounds vaguely like a saw blade on a whetstone. Early in their breeding season, the males sing for hours to defend their territory and to attract a mate.