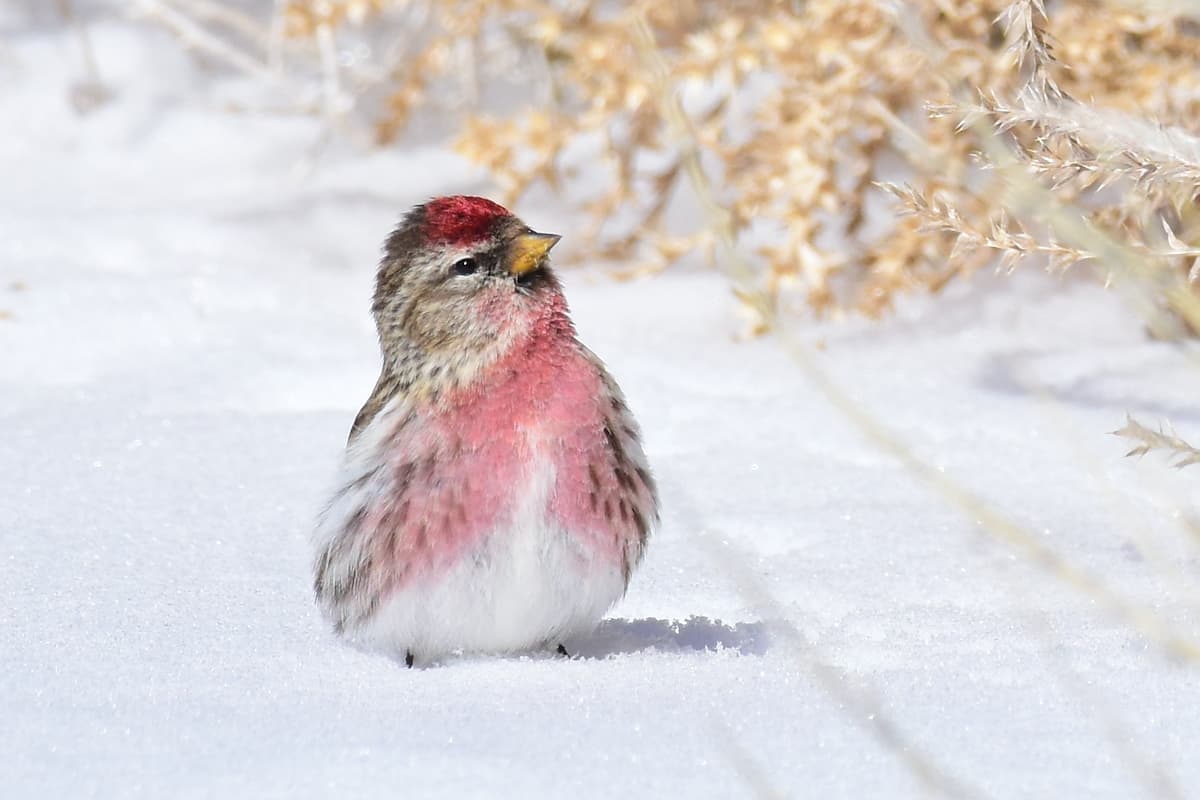 In the mostly-temperate climates present in North America, you might consider pink birds to be a tropical rarity. But this isn’t necessarily the case. Pink birds are inhabitants of many different regions  around the United States. Several species of birds with pink-feathers dwell in areas with cold winters and mild summers. In this article, we’ll discuss twelve types of pink birds found in the United States and Canada.

The American Flamingo might be easiest to recognize pink bird in the United States. It’s the only species of flamingo native to North America. Spot this bird in shallow swamps and coastal pools of water in southern Florida and the Florida Keys, not to mention your local zoo.

Flamingos’ diets of aquatic invertebrates contribute to their bright pink color. Shrimp can make their feathers redder over time. They are also able to filter saltwater out of their bodies with a special salt gland most birds don’t have.

This bird is unique and hard to miss. Look for it along the Gulf Coast and in southern Florida. It lives in freshwater and saltwater marshes, where it steps among mud and reeds to look for aquatic invertebrates.

Spot them flying with their necks straight out, a red eye, and a gray spoon-shaped bill. They forage for food in groups and maintain a horizontal posture even when their bills are underwater.

Native to the western United States, the Cassin’s finch lives in the Rocky Mountains, Great Basin, and parts of California and the Southwest. They search for seeds within the coniferous forests of these regions.

Only males have pink feathers on their heads and chests. Females are brown and white. Attract them to your bird feeder with sunflower seeds. They’re more likely to visit during winter when seeds are harder to find.

Purple Finches winter in the eastern United States and the plains and forests of southern Canada. Populations live year-round in New England and the Pacific Coast. They can be enticed to visit feeders with sunflower seeds.

More raspberry-colored than the Cassin’s Finch, the male Purple Finch has a delicate wash of pink across its head, breast, and belly. Its wings are a mixture of brown and pink. Females are brown and white.

While this tropical bird is not native to the United States or North America, there are substantial populations that live in South Florida. Escapees from wildlife sanctuaries, zoos, and private collections have led to the establishment of small colonies in the subtropical environment near Miami and Tampa.

Unlike other pink-feathered finches on this list, the Black Rosy-Finch’s pink feathers are located on its wings and underside, hidden beneath it’s dark feathers. Male and female finches have a white-crowned head, a gray body, and wings colored with white, gray, and light pink. Their beak color is dark during the breeding season, then turns yellow during the non-breeding season.

These cold-loving finches can be brought to bird feeders with Nyjer in the winter. They live only in the Rocky Mountains and Great Basin ranges of the United States.

Once limited to only the western United States, the House Finch is now a regular inhabitant of the eastern side of the nation as well. Populations live throughout human settlements, nesting along the edges of forests and visiting bird feeders often and in large numbers.

Like many other finch species, only male House finches have pink plumage. It marks their head and chest with a pink-scarlet stripe. Females are dusky gray and brown.

This finch is a well-traveled inhabitant of not just North America, but Europe, Asia, and southern South America. They live year-round in southern Canada, Alaska, and some of the Rockies. Other populations winter in the Great Plains and the Northeast.

Males have the rosy pink head and body, with gray and white wings. Females have yellow accent feathers rather than pink.

While this seed-eater’s plumage is dark pink and even red in most cases, it still has a pink tinge to its feathers. Like many species on this list, only the males sport the reddish-pink, while females are duller in color with yellow streaks.

Spot them in the forested regions of northern Canada throughout most of the year. Some populations winter in the northern half of the United States.

This seed-eating songbird loves colder weather. During the spring and summer, it breeds in northern Canada, Alaska, and even Greenland! It spends the winter along the northern border of Canada and the United States.

You’ll probably see this bird only in  the winter, but they are avid visitors of bird feeders. They prefer Nyjer seed as well as black oil sunflower seeds. Both sexes have a strawberry patch on their forehead, but only males have a pink wash on their breast.

A pink and brown treat unique to its range, the Brown-capped Rosy-Finch lives only in a narrow patch of the Rockies in Colorado and northern New Mexico. They prefer habitat in the margin area between the tree line and the tundra of the mountains.

Spot them during the winter when they forage for seeds in residential areas. They’re attracted to many types of seeds, including millet, Nyjer, and sunflower seeds.

Both males and females have brown upperparts and chest, with rosy pink only their belly and wing.

The Gray-crowned Rosy Finch can be found in Alaska and western Canada during the spring and summer. In the winter, it migrates south to the northern Rockies in the United States. They prefer to live at the tops of the continent’s highest mountain ranges.

They’ll visit bird feeders in the winter. Try offering nyjer seed or black sunflower. Make sure you don’t get too close, however. Because they spend most of their lives in remote areas, Gray-crowned Rosy-Finches are less afraid of humans than other bird species.

Like the other rosy finches on this list, their pink coloring is washed on their wings and lower belly. Their upperparts are mostly brown with gray wings and a gray head cap.