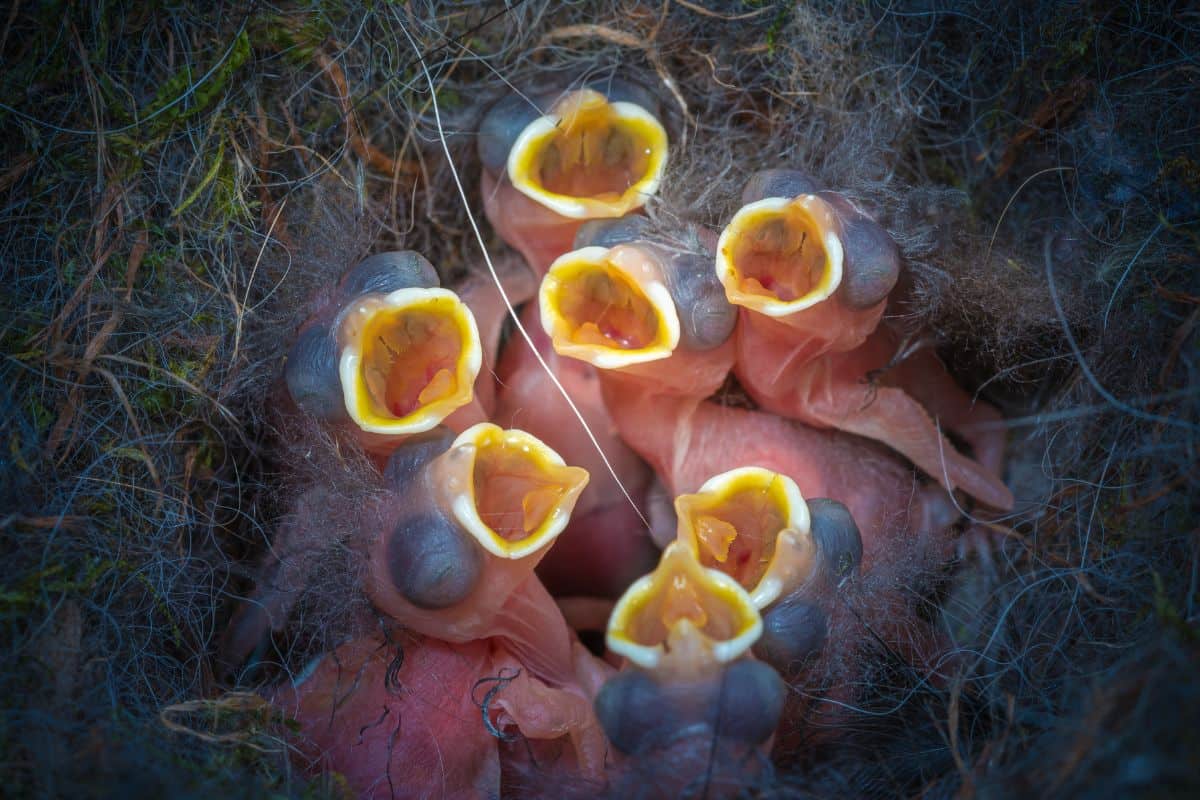 Chickadees can provide hours of entertainment if they’ve set up a nest near your home. Watching these minuscule birds fly back and forth all day, bringing food to their chicks, is immensely satisfying. Whatever they’re feeding those babies, there must be an inexhaustible supply of it, because they feed them a near-constant stream of food for weeks on end. So what do baby chickadees eat?

What Do Baby Chickadees Eat?

Bugs, bugs, and more bugs. Caterpillars, worms, spiders, flies, and whatever else the parents can catch. It does seem like caterpillars are the favorite, though, with spiders a close second.

Like their parents, baby chickadees love to eat insects. In truth, they probably aren’t too picky about what insects they eat, and will happily swallow whatever bugs their parents bring them. Having protein and fat provided by insects is very important in the growth and development of the young chicks.

How Much Do Baby Chickadees Eat?

Since it seems like their parents never stop feeding them during the day, baby chickadees must eat a lot. In fact, it’s estimated that it takes between 6,000 to 9,000 caterpillars to raise a brood of about five chickadee chicks!

Growing birds have never-ending appetites, and they’ll keep eating as long as their parents keep bringing the food. Young chickadees are fed by their parents from hatch, throughout nesting, and even 2-4 weeks after they leave the nest. If you have a garden, having chickadees nesting nearby must be a huge help since they’ll probably eat all the insect pests before you even notice they’re there.

When the babies are just hatched and need to be kept warm until their feathers come in, the male will do the majority of the food gathering. After a week,  the female starts to leave the nest more and help in hunting, and by about two weeks both males and females are hunting equally. 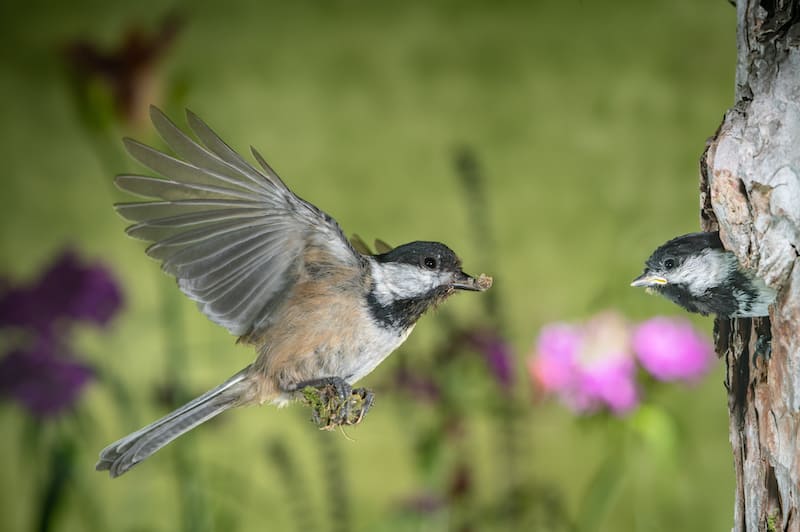 Why Do They Eat So Many Caterpillars?

Careful observers note that caterpillars are one of the most common foods that the parents bring back for the baby chickadees. While we aren’t sure why, this probably isn’t because caterpillars are more nutritious or better tasting than other available food.

Rather, it’s mostly a coincidence. Chickadees are usually raising their chicks at the same time of year that caterpillars are out, before they’ve wrapped themselves in their cocoons and metamorphosed into butterflies. As a result, there are lots of caterpillars around, and they’re pretty easy to catch compared with lots of other insects. So, they end up becoming a big part of a baby chickadee’s diet.

Do Chickadees Eat Other Things?

Besides caterpillars, chickadees will eat just about any insect or arachnid they can catch. Spiders are another common food for baby chickadees. The parents will grab whatever they can as they try to keep up with their babies’ insatiable appetites.

Adult chickadees eat lots of insects too, but they’ll also eat fruits and seeds. They really only turn to those food sources in the fall and winter, when insects are scarce, and by that time the babies will have grown up and left the nest. That means that they only eat insects until they’re fully grown.

How Do Chickadees Catch So Many Bugs?

Chickadees are small and fast, just like the insects they eat. They’ll sometimes catch them in the air, but more often they hop along tree branches looking for easier prey like caterpillars. They’ve even been known to hang upside down from the branches while they hunt.

You’ll often see adult chickadees with multiple bugs in their beak. Since their chicks can eat almost non-stop, they often grab as many bugs as they can fit in their mouth on each trip. They’ll keep hunting along the tree branches until they either can’t find any bugs or can’t fit anymore in their mouth, and then they’ll head back to the nest.

How to Feed Baby Chickadees

If you need to feed a baby chickadee, use a mixture of moist dog/cat food, wet/soggy rice cereal and hard boiled egg yolk. Dilute all with water and mix to a paste and feed through an eye dropper. However in general you should not attempt to do this yourself, and we will talk about why below.

Don’t assume a nest with baby chickadees with no visible parents has been abandoned. In most cases, the adults are nearby finding food and will come back periodically to feed the young. Sometimes feedings can be quick, and the adults will only stop by for a minute before leaving to find food again. Because you could easily miss this quick process, you would have to watch a nest non-stop (not a few minutes at a time) for at least a few hours before you could determine if the babies have potentially been abandoned.

If you have determined that the parents are not returning, it is important to contact a qualified bird rehabber. In many states, only certified rehab specialists are allowed to be in possession of wild birds. Not to mention they are trained in exactly how to care for each species.

Care of baby birds can be very time consuming and specific. Many nestlings need to be fed every 20 minutes or so for 12 to 14 hours a day! That is a lot of constant time and attention. They also need a balanced diet with enough protein and nutrients to grow properly. This is why the knowledge and expertise of a rehabber is their best bet for survival.

If you get in touch with a rehabber that isn’t able to take the chickadees right away, they may instruct you on how to care for them until they can pick them up. To find a rehabber near you, Google search the name of your state plus “wildlife rehabilitation”, or check your states department of the environment page for a list of licensed rehabbers. 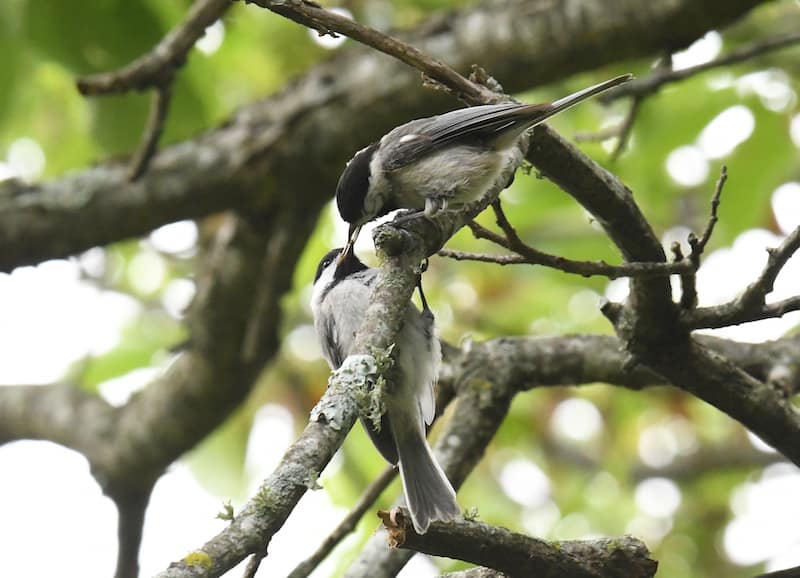 How to Attract Adult Chickadees

Since they eat so many bugs, a lot of people like to attract chickadees to their yards in the hopes that they’ll keep the insect population down. Fortunately, attracting chickadees is pretty easy. They are one of the boldest and most curious backyard birds.

A simple bird feeder will do the trick. Chickadees eat most types of seed, and especially enjoy black sunflower seeds. If there are chickadees in your area, they’ll likely find it quickly.

Putting up a birdhouse is also a good way to attract chickadees. Adults start to look for nesting sites toward the end of winter, so that’s when you should put up a chickadee birdhouse. That way you minimize the risk that other birds will settle in. An ideal chickadee birdhouse will have a one to one and a quarter inch entrance hole that is centered six inches above the floor of the birdhouse.

Baby chickadees eat a large amount of bugs, especially caterpillars. They’ll go through thousands of them before they’re fully grown, and they’ll continue to eat them as adults, even as their diet becomes more diverse.