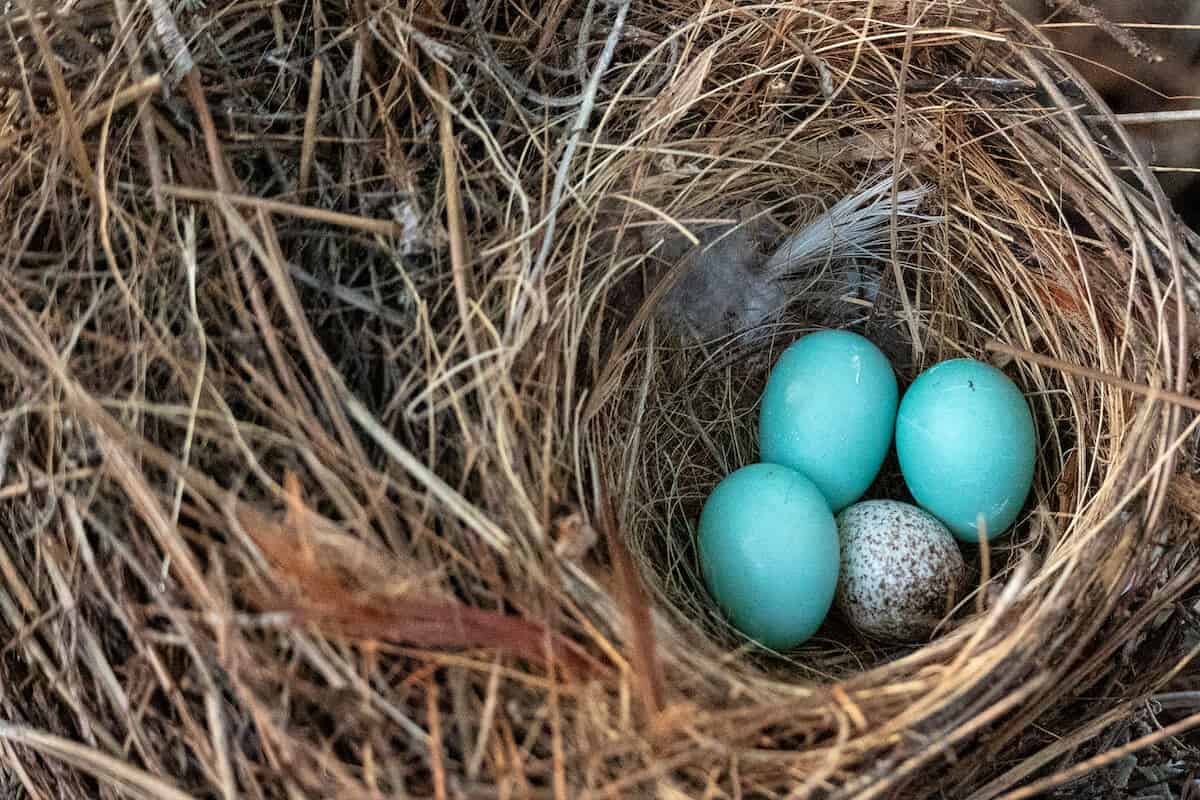 One of the sneakiest ways some female birds ensure the survival of their young is by laying their eggs in another birds nest. This practice is called “brood parasitism” or “nest parasitism”. Not all species engage in this act. In this article we will look at why birds lay eggs in other bird’s nests, how they get away with it, and some species that commonly display this behavior.

Why Do Birds Lay Eggs in Other Birds’ Nests

Brood parasites are animals that strategically get other animals to raise their young. This has been observed in birds, fish and insects. For birds, this typically means a mother will find nests of other species, and sneak in when the nest is not be attended and lay her egg. They may even destroy a nest, just so they can follow the mother bird as she builds a new nest to time the depositing of her egg just right.

Usually only one “intruder egg” is laid, but sometime more. By depositing an egg in several nests per season, she the chances that more of her offspring will survive. Also, she does not have to put any energy into building her own nest, incubating eggs, finding food for the young or protecting the nest. All that work gets passed to the bird that ends up raising the intruder egg, called the “host” bird.

How is brood parasitism successful?

Thicker Eggshells: Eggshells of brood parasite eggs are often thicker than the hosts eggs. This could be to prevent accidental or intended damage by the host, or to ensure the egg does not crack if it is laid on top of other eggs already in the nest. Think of it as extra insurance that the parasite egg will hatch.

Short Incubation: Many brood parasite eggs have a relatively short incubation, and the babies grow rapidly once hatched. By hatching before the host’s eggs, they can get food first and grow large before the other young in the nest. Sometimes this means they can destroy the unhatched eggs or push out the smaller host young from the nest.

Nestling Mimicry: sometimes the parasitic young are able to mimic the babies of the host bird. They may have similar plumage, a similar looking mouth, and a similar sounding begging call. Some species may not be able to distinguish the parasitic baby, and won’t risk ejecting it from the nest.

How do birds defend themselves intruder eggs?

Just as brood parasite species have evolved to dump their eggs in other birds nests, so too have birds evolved methods to prevent this. It is often referred to as an “arms race”, with both species developing and evolving new strategies to outwit the other.

Hiding nests: Some species try to avoid imposter eggs by making their nests hard to access. They may nest deep within dense thickets and tangles, or may construct enclosed nests with small openings.

Defending nests: Sometimes the best defense is a strong offense. They will spend very little time off the nest so intruders don’t have a chance to sneak in. If a brood parasite does come around, they will viciously attack them.

Egg expulsion: While many species aren’t able to recognize an intruder egg, some are. They may take note of the size, shape and color and decide to push the egg out of the nest.

Is It Okay To Remove A Parasitic Egg If You See One?

In the U.S., you may see this in your own backyard if you keep track of bird nests. If you come across a nest that clearly has an intruder egg in it, is it okay to take it out? Experts say no. In the U.S. at least, it is illegal to tamper with the nests of native species. And the main culprit, the brown-headed cowbird, is native. You may find their method of rearing young distasteful, but it is part of their natural evolution.

This can also have unintended consequences for the birds you are trying to protect. The mother probably won’t know you removed an intruder egg, she will just see that some of her eggs are missing. This can often cause her to abandon the whole nest, thinking its location had been found by a predator.

Not only that, but brown-headed cowbirds and other brood parasites often watch the nest from afar. If they see an egg has been expelled by you or the mother, they can retaliate by attacking and destroying the whole nest. Researchers actually call this “mafia behavior”. Fear of retaliation can motive the host to accept the intruder egg next time they build a nest.

8 Birds That Lay Eggs In Other Birds’ Nests

Now let’s look at some of the most well known examples of birds that exhibit this brood parasitism behavior.

Brown-headed cowbirds are the most widespread parasitic bird in the United States. They take advantage of other nesting birds by laying eggs in their nests. Often host parents don’t have the ability to recognize that the chick isn’t theirs, so they don’t realize they’re feeding an intruder.

Brown-headed cowbird chicks are strong and muscular. They will try to out-compete their nest-mates to get the most food, and if they feel they aren’t being fed enough may push other eggs or young out of the nest. Often, they are quite a bit larger than their host parent!

Brown-headed cowbirds engage in nest parasitism with over 200 species of birds! They may have favorite host species, but will really try it with pretty much any nest they can find. A female can lay up to 36 eggs per season, and often their egg looks nothing like the host eggs.

Females have been known to monitor how their eggs are doing in the host nest, and if the host has expelled their egg, they may retaliate by attacking the nest. They will then follow the host as they build a new nest, and lay another egg in the new nest! Quite relentless.

The greater honeyguide is known as the quintessential African honeyguide species. While this bird has quite the reputation for leading hunters to beehives teeming with honey, there is a drawback to its interesting lifestyle few expect: it is a brood parasite.

Greater honeyguides do not raise their own young. Just as they optimize the search for food with high efficiency, so too do they optimize the raising of chicks. Females lay about 15 eggs each year. She lays each egg in a different nest and often breaks the existing eggs too.

The greater honeyguide chick hatches with a special tooth on its bill. It uses this tooth to peck the other nestlings or eggs to death.

The common cuckoo is quite common in Africa, Europe, and Asia. This bird is adorned in no-frills shades of grey that give nothing away about its amazing ability to mimic and imitate prey species and predators alike.

The common cuckoo uses egg mimicry. Each female will have a favorite host species (over 100 host species have been recorded), and her eggs will resemble those of the host in an attempt to keep them undetected and indistinguishable from the other eggs. It is believed this egg mimicry for a particular species is passed down through the female chromosome, inherited from their mother.

You can spot the black-headed duck based mainly on its name. This duck is native to the wetlands of middle South America; populations live on the western coast of Chile as well as in Bolivia, Argentina, Uruguay, and the southeastern coast of Brazil.

Males and females look almost exactly the same. Males’ heads and necks are black and glossy, while females’ heads are dark brown only. These ducks are not domesticated, but many have adjusted to changed environmental conditions as a result of agricultural development. The flooded fields and flooded ditches from agricultural endeavors mimic their natural habitat: freshwater marshes.

Females choose the nest of species to lay their eggs, including waterfowl, coots, rails and sometimes gulls. The host mother will incubate the egg. However unlike songbird species where the babies must remain in the nest and be fed until they grow enough to fledge, ducks hatch mobil and ready to go. So very soon after the black-headed duck baby has hatched, it will leave the nest and fend for itself.

Striped cuckoos are one of the few species of parasitic cuckoos which live in both North and South America. These brown and cream birds have a jagged crest and a curved, almost hooked, bill.

These songbirds hunt for insects on the forest floor. They live throughout the jungles of South America, and north into Central America and even north into southern Mexico.

They are brood parasites of a few bird species, but they mostly prey on spinetails, a group of insect-eating birds. When parasitizing her host, the female Striped cuckoo lays 1-2 eggs inside the hosts nest. After the young cuckoos hatch, they use their  hooked bill to kill the other young in the nest, so that only the cuckoos are raised.

This glossy black songbird lives in open woodlands and cleared pastures of South America. Like other cowbirds, it scratches for insects and small invertebrate prey disturbed by the trampling of cattle. Males are an iridescent, glossy black while females are a dull brown.

The shiny cowbird is basically South America’s version of the brown-headed cowbird in North America. It lays eggs in the nests of a vast array of species. Females will look for potential nests, then chase the mother off the nest long enough to deposit her egg. Some birds accept the egg, while others may attempt to toss it from the nest. The shiny cowbird chicks will hatch sooner than many other species, causing trouble for the other eggs and younger birds in the nest.

Common goldeneyes are waterbirds native to the United States, Canada, Russia, and Northern Europe. They are well-adapted to cold weather because of their chosen habitat as well as their practice of diving to obtain aquatic prey. Recognize them thanks to their distinct black-and-white feather pattern and bright golden eye.

Many species of waterfowl engage in this behavior, both incubating their own eggs and depositing eggs in others nests.

Also known by the name cuckoo weaver and parasitic weaver, the cuckoo-finch possesses a mixture of cuckoo-like and finch-like traits. Small flocks of this finch fly around looking for seeds. They live in sub-Saharan Africa near reliable water sources and open woodlands.

During the breeding season, females don’t make their own nests. Instead, they lay their eggs in the nests of competing birds. This group includes prinias and cisticolas. Depending on the region where the cuckoo-finch lives, the female’s eggs resemble those of either group.

Scientists believe the differences in egg coloration are an evolutionary adaptation to the colors of their host species’ eggs.