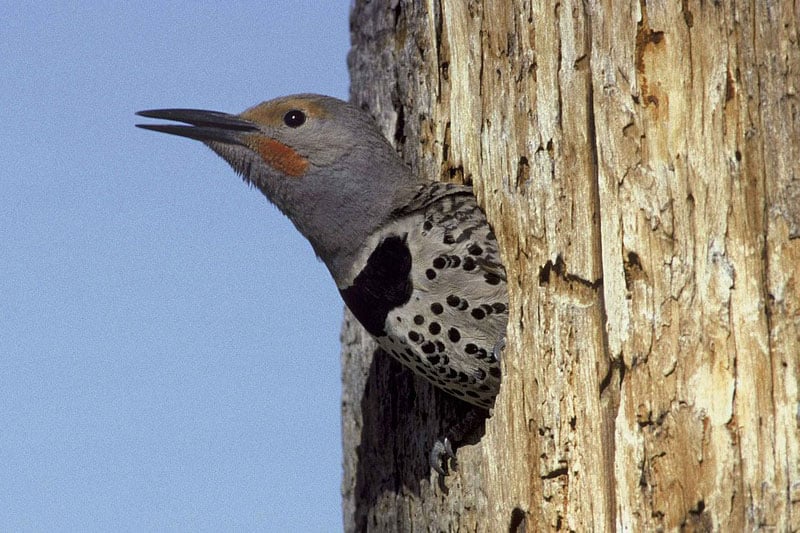 We’ll have a look at each of these species so that you can identify them as well as learn a few fun facts.

Species of Woodpeckers of Alaska

They’re found in a wide range of habitats including open woodlands, forests, orchards, groves, and suburban areas. In fact, it’s a regular visitor to backyard gardens, feeders, and even residential parks. Its small size allows it to forage in places where larger woodpeckers can’t reach, such as tall weed stems and grasses.

Downy Woodpeckers have predominately black and white colorations very similar to Hairy Woodpeckers. They have white undersides and black uppers with white checkering and a bold white stripe that runs down the back.

Males also sport a tiny red patch on the tops of their heads. Their silhouettes resemble that of a larger woodpecker, with straight backs as they perch on tree trunks and straight, drill-like bills. However, the bills of Downy Woodpeckers tend to be smaller in proportion than other species.

Hairy Woodpeckers look nearly identical to Downy Woodpeckers in plumage coloration. They have mostly black and white plumage with the same white stripe running along their backs. However, Hairy Woodpeckers are larger and possess a longer bill.

Compared to other smaller sized woodpeckers, Hairy Woodpeckers do a lot of drilling and excavating in order to feed on wood-boring insects and larvae. Listen for their drumming and look for them perched on tree trunks and on the main limbs of trees.

Like the Downy Woodpecker, Hairy Woodpeckers are found year-round in parts of central and southern Alaska. Since they are larger than Downy Woodpeckers, they rely on larger and taller trees and are generally found in more mature forests and open woodlands.

They are less likely to be found in suburbs and backyards, though they will occasionally take advantage of a feeder, especially those stocked with suet.

Here are some great suet feeders to attract woodpeckers to your yard.

Out of all the woodpeckers found in Alaska, Northern Flickers really stand out as far as coloration. Unlike most species that feature primarily black and white plumages, Northern Flickers are instead brown all over, with lots of patterning on their undersides and wings.

They’re large woodpeckers in between the size of an American Robin and Crow, with smooth, rounded heads and long, tapered tails. There are two distinct types of Northern Flickers as well — Northern Flickers in the east have bright yellow patches under their wings, but birds in the west, including Alaska, have red.

Northern Flickers are only found in some parts of Central Alaska in the breeding season. Here they occupy forests and woodlands that also offer open grounds for foraging. While most woodpeckers hang out on trees to forage, Northern Flickers are often spotted directly on the ground, using their slightly down-curved bills to dig for ants.

American three-toed Woodpeckers are found all year in much of Alaska, though not as common towards the coast. Their small size and inconspicuous nature doesn’t make them very easy to find. American Three-toed Woodpeckers often spend a long time perched on a single tree, either sitting very still or flaking off the bark.

Unlike most woodpeckers, these woodpecker don’t rely on drilling or excavating wood and instead peel the bark off with their bills.

Black-backed Woodpeckers are usually the dominate species in places where both species of woodpeckers occur. They often drive away American Three-toed Woodpeckers from their territories.

These woodpeckers are medium-sized birds, around the same size as a Hairy Woodpecker. Their coloration is close to the American Three-toed Woodpecker’s, but with less barring on the back and wings. The solid black plumage on their backs helps them blend into charred trees in forests where wildfires had occurred.

Black-backed Woodpeckers flock to these burned areas to feast on the larvae of wood-boring beetles and other insects, and will occupy these territories for years.

Red-breasted Sapsuckers are only found in far southern Alaska, in the panhandle. They mostly reside in coniferous forests, but in the winter they extend their habitats to other trees, too.

For a long time Red-breasted Sapsuckers, Yellow-bellied Sapsuckers, and Red-naped Sapsuckers were believed to belong to the same species, so not much information has been studied about the differences in behavior.

Red-breasted Sapsuckers are medium sized woodpeckers with sold red heads and red chests. The rest of their bodies are covered in black and white plumage. They forage the same way other sapsuckers do, by drilling small sap wells into trees in order to lap up the tree sap as it flows. 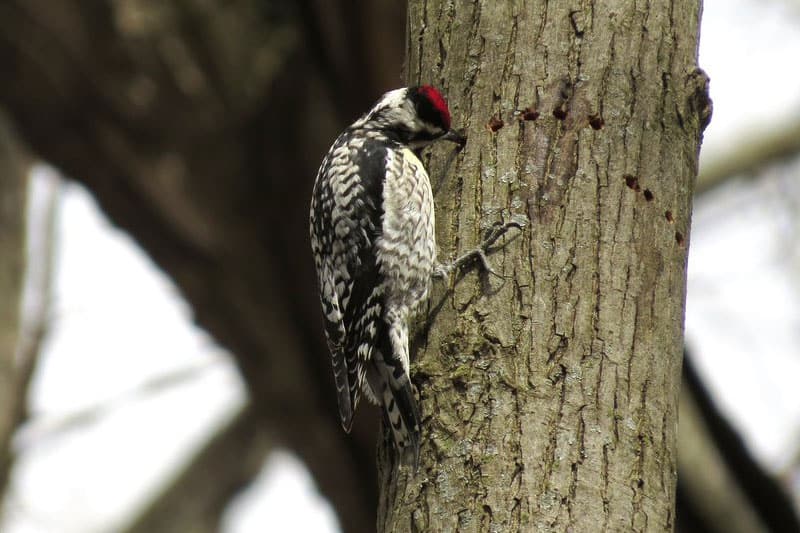 They aren’t common at bird feeders and do in fact eat sap as their primary food source. They drill holes into maple, elm, aspen, and birch trees and collect sap with their long tongues. Aside from sap they also will eat a variety of insects.