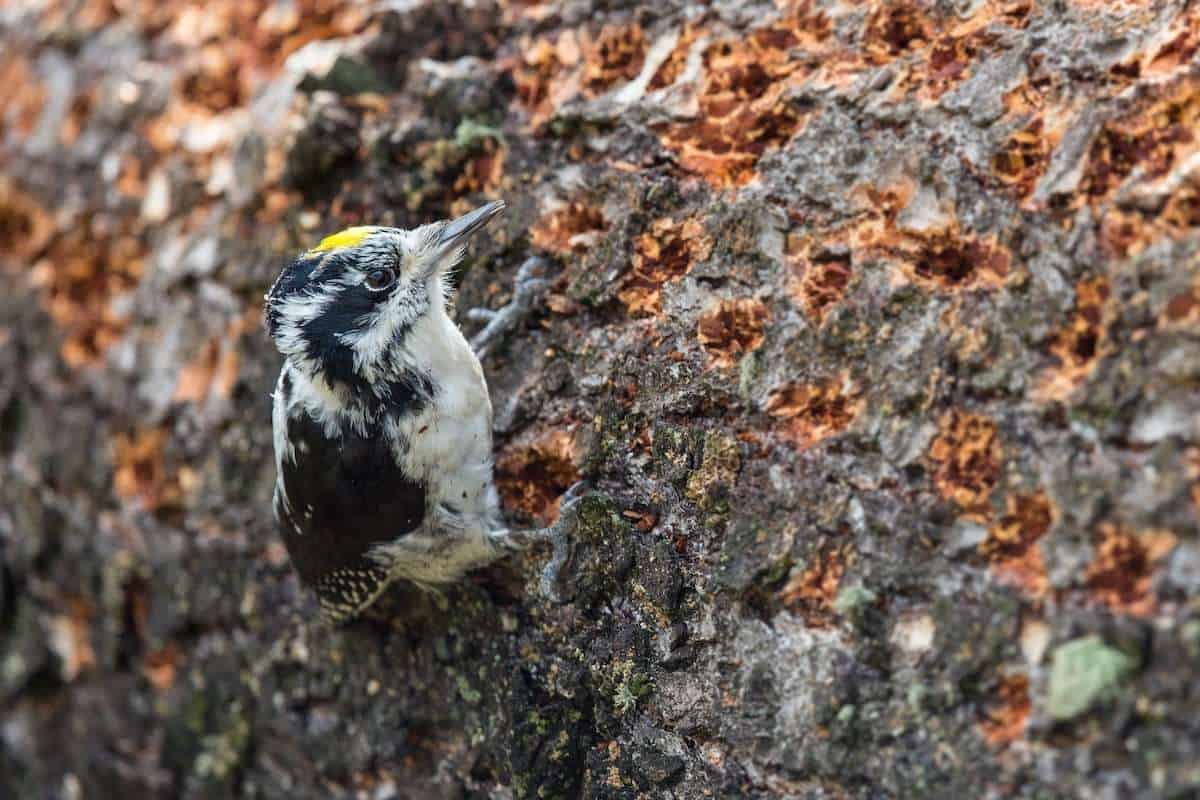 There are many different species of woodpeckers in North America, and you can potentially find 11 of those woodpeckers in Colorado. In this article we’ll take a look at each species and touch on where and when you might spot one in Colorado. At the end of the article, we also give you a few tips on how to attract woodpeckers to your yard.

11 Species of Woodpeckers in Colorado

These woodpeckers are much  more common in Canada. Aside from a few other states in the west, Colorado is actually one of the few states that the American three-toed woodpecker can be found.

Look for them in mountainous areas and the national forests through the middle of the state. They prefer damaged, old growth forests with lots of dead or even burned trees where they can extract insect larvae and mine for bugs easily.

The majority of woodpeckers have 4 toes. However as the name suggests, these woodpeckers have just 3 toes. It is believed that the three-toed woodpecker is able to lean back further and strike a more powerful blow to its target because of the leverage having just 3 toes affords it.

You can find these tiny woodpeckers everywhere throughout Colorado all year. They are very common throughout almost all of the U.S. and are the smallest species of woodpeckers in North America. The downy is the woodpecker species most likely to visit backyard bird feeders.

Downy Woodpeckers love suet but also eat a variety of seeds like sunflower seeds, millet, and peanuts. They’re only about the size of a sparrow and can be identified by the white spots on their backs, and pure white chest and belly. Males have a red patch at the back of their head.

You may be thinking that this woodpecker looks an awful lot like the downy. Hairy woodpeckers often occur in the same areas as downy’s across the U.S. and cause plenty of confusion when you’re trying to identify which is which.

The hairy is significantly larger, and has a longer beak relative to its body size than the downy. We have an article here that can help you learn how to tell them apart.

These two woodpeckers are very similar in all ways from habitat to diet. They can be found throughout Colorado all year. The hairy woodpecker tends to be a little more shy of humans, and while they will visit backyard suet feeders, they aren’t as commonly seen as the downy.

Look for ladder-backed woodpeckers in the pinyon-juniper woodlands found in the southeastern corner of Colorado. They aren’t commonly seen at suet feeders, as they eat mostly insects in the wild. You can try to attract them with mealworms, peanut butter, and black oil sunflower seeds when offered.

Lewis’s woodpeckers are most often seen in central and southwestern parts of Colorado. They tend to stay in pine forests and forests that have been burned, but their populations are often unpredictable. Especially after breeding season when they travel around looking for stores of acorns and nuts. They take these foods and store them in crevices to last them throughout the winter.

Unlike a lot of other woodpeckers, Lewis’s Woodpeckers mostly feed by catching insects in midair. They have broad, rounded wings that gives their flight a graceful, crow-like quality.

Flickers feed mainly on insects and unlike other woodpeckers, often like to find them on the ground rather than trees. Identify them by the black spots on their bellies, solid black bib, barred black and gray wings, and light brown and gray head. Males will have a “mustache” while females do not.

There are two color varieties in the U.S., the “yellow-shafted” and the “red-shafted” and Colorado has both! The main difference is the color underneath the wings and tail, and the color of the mustache on the males. You may even seen something that looks like a combination of both, as they sometimes interbreed and form a hybrid.

Northern flickers are common throughout Colorado all year, and may visit backyard feeders for suet.

Colorado is along the far western edge of the red-headed woodpeckers range. They tend to only be seen in the eastern half of the state, during the spring and summer. In winter, most most out of the state and head further east.

Red-headed woodpeckers can be quite aggressive and it’s not uncommon for them to take over nests by knocking eggs out or even puncturing them to kill the young. They are one of only four species of woodpeckers that actively store their food in caches for later use, their favorite being acorns and beech nuts. These woodpeckers takes it a step further though, and will cover the food up with bark or wood to better camouflage their stash.

Like other sapsuckers, they drink sap from trees like aspen, birch, or pine, but also feed on insects. Look for them in western and central Colorado early in the breeding season (mid-May), and early in the morning when they are most active. They remain in Colorado through the summer, but then head out of the state and spend winters further south.

Neat rows of holes in a sap-producing tree are a good indicator that a sapsucker is in the area.

Williamson’s Sapsuckers are only found in a handful of midwestern states, Colorado being one of them. They are mainly found in the central and southwestern part of the state. These sapsuckers only visit Colorado during the breeding season, then head further south for the winter.

Uncommon in backyards, Williamson’s sapsuckers are primarily found in the mountainous forests. They roost in natural or excavated cavities and prefer nesting in a larger, older trees.

Acorn Woodpeckers have a very limited range in North America, and Colorado is not considered to be part of their normal range. However, they have been spotted in the state over a dozen times. So sometimes they do stray from their homes in Arizona and New Mexico and venture further north, but it would be considered rare.

Colorado is not considered to be part of the red-bellied woodpecker’s range, as they are a bird of the eastern United States. However a small population will travel into eastern Colorado from Kansas from time to time.

These medium-sized woodpeckers are fairly common at feeders, and will eat suet as well as peanuts. As their name suggests, they do have a pink colored belly, but it is often hard to see.