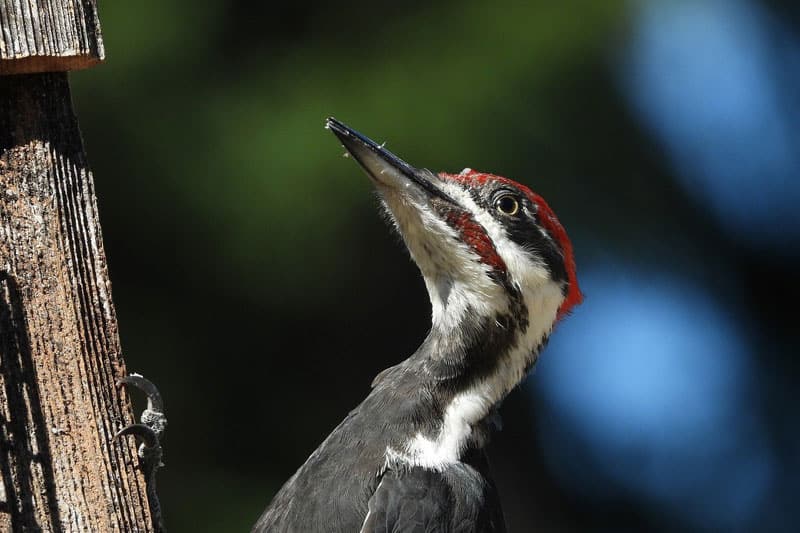 Even though it’s one of the smallest states, Connecticut still has plenty of beautiful wildlife. the state has a wide variety of birds, and more specifically, several different species of woodpeckers. For this article we’re going to learn about the 7 species of Woodpeckers in Connecticut, and even give a few tips on how and when to spot them in the state.

Species of Woodpeckers in Connecticut

Not all of these species are found year-round in CT, but they all occur regularly at certain times of the year.

Pileated Woodpeckers have a few key characteristics that make them easily identifiable. They are the largest woodpeckers in North America, with large, flaming-red crests at the tops of their heads and bold white stripes down the sides of their necks.

These woodpeckers are often heard before they are seen, either drumming into trees with their long, chisel-like bills, or calling with their loud, high-pitched whinny.

Find Pileated Woodpeckers year-round in Northern Connecticut, in forests that have plenty of tall trees and downed, rotting logs. Unique, rectangular shaped holes in wood are a distinct give away for these birds, indicating that they may be in the area.

Red-headed Woodpeckers are primarily found in the south eastern and central portions of America, but a breeding population can be found in part of Connecticut during the spring and summer.

They’re medium-sized birds with short tails, strong bills, and bright red heads. The rest of their striking coloration shows black on their upper parts with contrasting, bright white bellies and half black, half white wings.

These woodpeckers tend to occur in small colonies. They favor woodlands with clearings, the edges of forests, and other semi-open areas. Listen for deep tapping on trees, or for their sharp “wee-ah” calls to locate them.

Red-headed Woodpeckers are one of the most omnivorous woodpeckers species. In addition to foraging in trees, they will eagerly take advantage of other food sources such as flying insects, wild fruits, nuts, seeds, and sometimes even small rodents and other birds’ eggs.

Red-bellied Woodpeckers are found year-round in Connecticut, with the state being at the northern edge of this specie’s range.  They tend to be somewhat more common than Red-headed Woodpeckers, and are sometimes confused for this  species due to also having red markings on their heads. The rest of their plumage is pale overall, with bold, black and white barring on their backs.

Yellow-bellied Sapsuckers are mostly migratory visitors just passing through Connecticut, though you might find a few birds sticking around to breed in the spring and summer in Northern Connecticut. They stick to hardwood and coniferous forests, and are particularly fond of aspens. They will frequently nest in cavities in groves of these trees.

Downy Woodpeckers live year-round in Connecticut, and are commonly found in a range of habitats including open woodlands, forest edges, urban parks, and even backyards. They’re opportunistic foragers. They drill into trees like most woodpeckers in addition to foraging in tall grass and weeds, and also backyard feeders.

In fact, Downy Woodpeckers are among the most likely woodpecker species to visit feeders. Downy are the smallest woodpecker species in Connecticut as well as North America. In the winter they meet up with other flocks of small birds, such as chickadees and nuthatches to stick out the cold in larger numbers.

Hairy Woodpeckers tend to stick to trees for foraging and are frequently seen perched on the sides of trees or around the trunks. They require taller trees and more forested areas than Downy Woodpeckers, and are less likely to appear at backyard feeders — though they will visit on occasion.

Hairy Woodpeckers are also found year-round in Connecticut. They take advantage of the holes left by larger Pileated Woodpeckers, scoping them out for any insects left behind. They’ll also visit holes created by sapsuckers to finish off any remaining sap. These woodpeckers rely on wood-boring insects, and excavate a lot compared to other woodpeckers of the same size.

Northern Flickers have a year-round range in all of Connecticut. They stand out from the other species due to the gray-brown plumage that covers most of their bodies. They also have plenty of dark markings on their undersides as well as brightly colored tail feathers. These markings differ between subspecies, yellow for birds in the east and red for those in the west.  Northern Flickers are very colorful birds.