As you may have guessed, in this article we’re going to talk about all 7 of these species of woodpeckers in Indiana. For each species we’ll have a picture to help you identify it, a bit about its size, a brief description with some fun facts, as well as where and how they can be found in the state of Indiana.

The 7 Species of woodpeckers in Indiana

Downy Woodpeckers are the smallest of all woodpeckers in North America and can be found in Indiana all year, throughout the whole state. They are very common at feeders and easily attracted with suet, peanuts, mixed seed, or black sunflower seed. Whenever I put up a new feeder in my yard Downys are always among the first to visit it along with chickadees and titmice. They do not migrate and are also very common in the winter time.

The Hairy Woodpecker is also a year-round resident to Indiana and the majority of the United States. They are very commonly seen at bird feeders and eat all of the same things as their little brother the Downy. It’s quite possible you’ve seen them both and just assumed they were the same species. 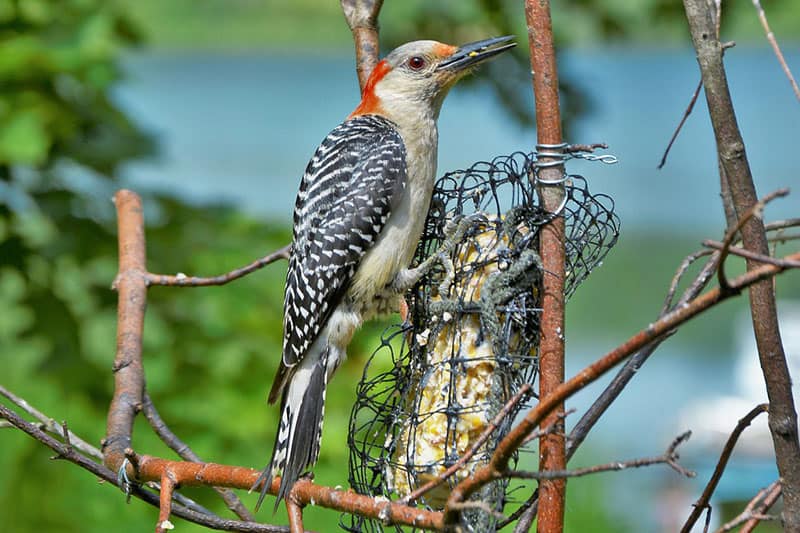 Red-bellied Woodpeckers are common throughout Indiana all year according to allaboutbirds.org. They are significantly larger than Downy Woodpeckers and very similar in size to Hairy Woodpeckers. They can also be seen frequenting bird feeders, especially suet feeders.

At first glance you notice their red heads but resist the temptation to call them Red-headed Woodpeckers, but once you scroll down and see the next woodpecker in Indiana you’ll see the difference. Red-bellied Woodpeckers do have a red stomach but it is more of a pale red but is often unnoticeable when they are up against a tree or feeder. Instead look for their black and white barred wings and red mohawk down their neck to identify them. 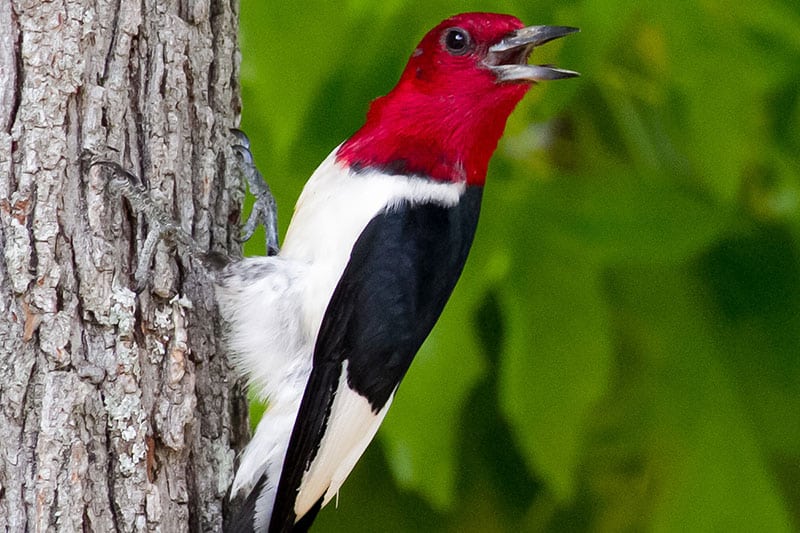 Red-headed Woodpeckers are less common at bird feeders than the first 3 on this list of woodpeckers in Indiana, but are still found year-round throughout the state. They can sometimes be seen visiting bird feeders and then darting to a tree where they will stash the tasty treats in holes or bark for another day.

Pileated Woodpeckers are year-round residents to most of the state of Indiana, but less common in the northeastern part of the state. They are the largest species of woodpecker in Indiana as well as North America. Like other woodpeckers they readily eat at suet feeders when offered but they can be quite elusive and hard to attract. This bird is one that I am still trying to attract to my yard and have yet to see one at my new house. 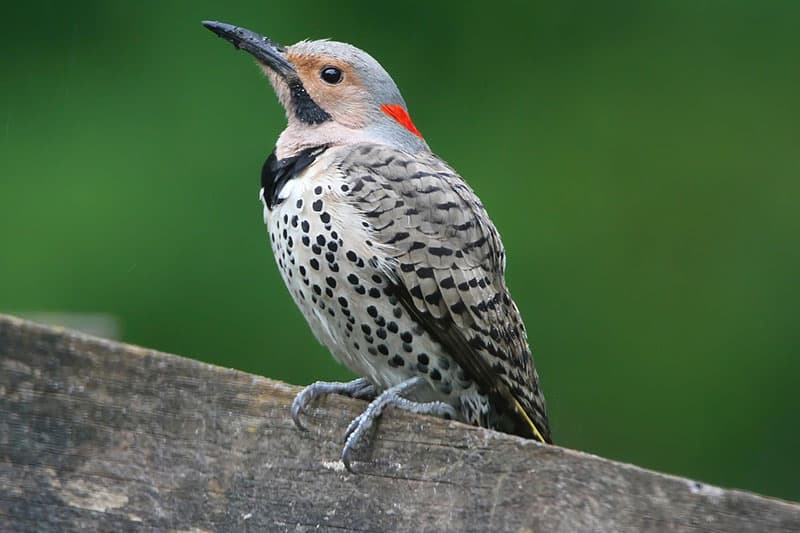 Northern Flickers are very colorful birds found all year throughout Indiana that frequent backyards. While they do occasionally visit feeders, they mostly eat ants from the ground by picking through leaves and dirt and snatching them with their long tongues. Aside from the ants they will eat other invertebrates as well as berries, sunflower seeds, and thistle.

These woodpeckers are about the size of an American Robin and are present in the whole state of Indiana. Yellow-bellied Sapsuckers winter in southern Indiana. They then migrate through north Indiana to their breeding grounds in northern states like Michigan and into Canada. Yellow-bellied Sapsuckers are mostly black with light under bodies, yellow and black chests, and red feathers above and below their beaks.