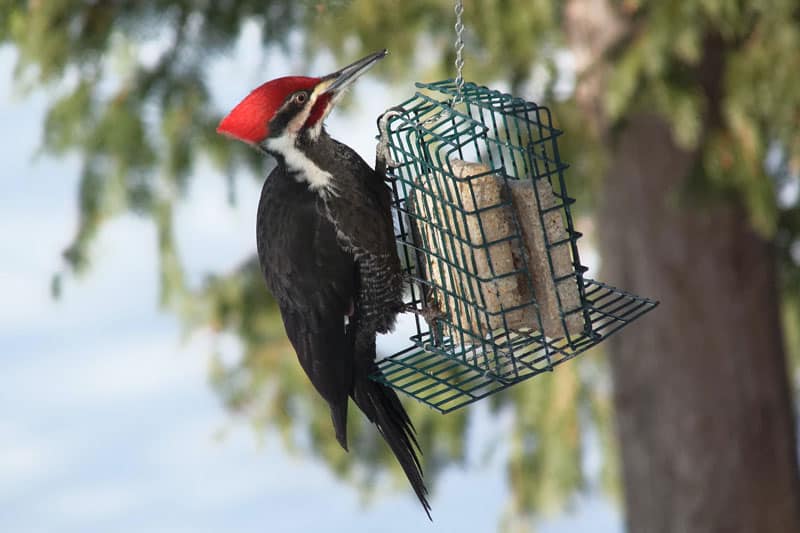 Woodpeckers are a type of bird uniquely adapted to forested habitats. They have strong bills that are used to chisel, peck, and pull away bark and wood in search of insect prey, to create cavities in trees for nesting, and to communicate with other members of the species. Woodpeckers are especially interesting because they have a reinforced, shock-absorbing skull that cushions the shock of repeated blows, as well as a long, barbed tongue used to spear and extract insects. There are 7 total species of woodpeckers in Massachusetts, with up to 22 species in North America, here are 17 of those species.

Here’s a list of the Massachusetts Woodpeckers along with some pictures and fun facts for the next time you see or hear one of these amazing birds!

7 Types of Woodpecker in Massachusetts

The Downy Woodpecker is the smallest and most common of woodpeckers in Massachusetts, as it can be found nearly anywhere trees are present. It’s named for the soft texture on its back, and they’re often affectionately called “downies” by locals. They have a very distinctive black and white striping pattern down the center of their back with broad horizontal bars on their wings. Males and females have slightly different patterns, as the males also have a bright red dot on the backs of their heads.

This woodpecker spends most of its time clinging to the trunks and branches of trees. Like most woodpeckers, they’ve evolved zygodactyl feet, meaning they have two toes that face forwards and two toes that face back, unlike most species of bird that have three forward and one back. This allows them to cling to the tree better in search of insects. Their smaller size comes in handy when foraging, as they’re able to crawl all the way out to the tips of smaller branches that other woodpeckers are too heavy to access.

The Hairy Woodpecker resembles the Downy Woodpecker with its black and white stripe and red dot, as well as also being seen throughout the state, but they’re two distinctive species! The hairy’s beak is larger than the Downy’s, and has all-white outer tail feathers as well. It’s less common than the Downy as well, preferring mature forests with old tree growth. It mostly consumes insects, but will include plant matter in its diet as well.

This woodpecker is known for occasionally following the sounds of Pileated Woodpeckers within the same region in search of easy food. As the Pileated moves on, the Hairy Woodpecker will investigate the deep holes and take any insects that may have been missed. They’ll also follow the routes of Sapsuckers, as they’ve been known to drink sap leaking from the wells left in the bark. It’s believed they have a taste for sweet things, as they’ve also been seen pecking into sugar cane for the juice.

The Northern Flicker is the only woodpecker in Massachusetts with gray-brown plumage rather than the traditional black and white. When in flight, its wings have been known to flash yellow from underneath. It lives primarily in woodlands, wetlands, and many built-up areas, making it a common sight at bird feeders throughout the state.

This bird eats insects and other invertebrates, but will also commonly consume seeds and berries when they’re available. This is the most common species to see vertically walking up a tree trunk, thanks to its zygodactyl feet, and it also has stiff, pointed tail feathers that protrude at just the right angle to serve as a balance prop. It’s also one of only 3 woodpecker species that migrate, although it’s still found in Massachusetts year-round.

The Pileated Woodpecker is most likely the species people think of when you say “woodpecker”. This crow-sized bird has a bright red crest and a striking black body with white patches on the wings, making it a treat to see no matter how common! It’s obvious when you have a Pileated Woodpecker nearby. As the largest woodpeckers in Massachusetts and in North America, they leave distinctive rectangular holes in the trees it excavates in search of carpenter ants – their primary source of food.

It can be found in the conifer forests of Massachusetts, but has slowly been moving in closer to parks and woodlots around the edges of large cities as humans have been encroaching on its habitat. Thankfully, its numbers are gradually increasing, although it’s still threatened by the clearing of forests and the use of pesticides.

The Yellow-bellied Sapsucker can be seen throughout the state during migration, and has also been recorded in the area during winters as well, although it’s more sporadic. It has a breeding population in the Western part of the state as well. It’s considered to be one of the more vocal woodpeckers, as it can become incredibly noisy in the spring with cat-like calls and staccato drumming.

You may also like: Birds of prey in Massachusetts

The Red-bellied Woodpecker has only become common in Massachusetts during the past two decades. It’s now found throughout the state in many types of forests, and will commonly visit feeders as well. Unlike the name suggests, the most prominent patch of red on this bird is on its head and nape. They also make a wide variety of sounds, including trills, chuckles, and steady drumming on trees to communicate.

Like most woodpeckers, this bird has a tongue with a barbed tip with sticky spit, making it the perfect tool to slip into crevices in search of food. Males actually have a longer and wider-tipped tongue than females, which is believed to be advantageous to breeding pairs. This allows them to forage in slightly different places within their territory, maximizing the use of available food and allowing for healthier chicks.

The Red-headed Woodpecker is the most rare woodpecker in Massachusetts, as it breeds only erratically in the state. This breeding is infrequent enough that it’s a notably exciting event for birdwatchers in the state. The adults have entirely red heads, while the immature juveniles have brown heads. Its feeding habits are very unusual for a woodpecker, as it stores food in tree crevices, often covering it with bark, for later. It also most commonly hunts in the air with the ability to catch insects mid-flight. They’re boldly patterned, easily identifiable, and very active.

Open pine plantations, tree rows in agricultural areas, and standing timber in beaver swamps and other wetlands all attract Red-headed Woodpeckers. They’re fiercely defensive of this territory once they move in, even removing the eggs of other species from nests and going so far as to puncture duck eggs. Because of this action, the Red-headed Woodpecker was used as the Cherokee Indian war symbol for centuries.