There are 352 species of hummingbirds in the Americas, with as many as 15 of those species regularly occurring in the U.S. and Canada. An additional 9-10 species will occasionally make an appearance in the states and are considered vagrants. The species we are looking at in this article is the Allen’s hummingbird, a visitor to central Mexico and the western coast of California.

We’re about to show you some up-close and personal images of this amazing species, and share some interesting facts and information.  Let’s dive in!

Allen’s hummingbirds are a smaller hummingbird, and one of seven species contained in the Selasphorus family. Unlike many hummingbirds that are mainly green in color, Allen’s have a lot of bronzy and orange feathers. There are two recognized subspecies, based on location.

The Allen’s hummingbird is known for being extremely close in appearance to the Rufous hummingbird. In fact, they can be quite hard to tell apart. Their body shape is compact and fairly stocky, and they have beautiful rufous-orange coloring.

Allen’s males have a reddish-orange throat gorget, orange on their belly and sides, orange around the eyes and an orange rump. They have green feathers on their forehead that extend over the top of the head and down onto their back.

If the hummingbird you are looking at looks similar but is all orange without the green, then you are looking at a Rufous. Unfortunately, Rufous do sometimes have have green back feathers so it’s not a fool-proof way to tell them apart.

Females/immatures have similar coloring to males, although they tend to have more green and their orange isn’t as bright. They do not have the fully colored throat like males, instead they have heavy green and bronze spotting.

They can be nearly impossible to tell apart from female/immature Rufous hummingbirds unless carefully inspected, and even Cornell states they “are nearly indistinguishable in the field and many are best left unidentified.”

Both males and females will defend their nectar sources on their summer and winter grounds. During the breeding season, males perform both a side-to-side and “pendulum” style courtship display. The main purpose of these dives and displays is to attract females, however they may also use these flight patterns to threaten other species. 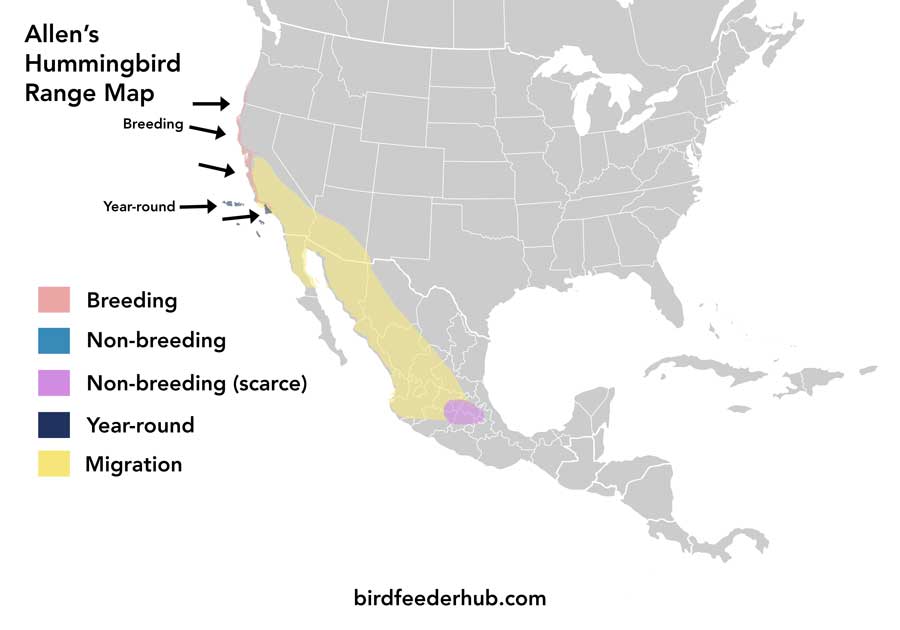 Summer: breeding occurs along the western coast, from southern Oregon down to southern California.

There is also a population that remains all year around Los Angeles and on the Channel Islands.

Like all hummingbirds, the Allen’s drinks from nectar producing flowers. They also catch insects by “hawking“, sitting on a perch until an insect gets close then quickly flying out to catch it mid-air. They may also eat small insects that they pick off plants.

Their breeding range along the western coast is along a narrow area of coastal forest, chaparral and scrub up to 1,000 feet elevation. While wintering in Mexico, they spend their time in pine-oak forest, forest edges and open but scrubby clearings with many flowers.

Males sit out on high perches, watching their territory and looking for females to impress. He will put on a display for females, flying high then diving down and rocking like a pendulum, or shuffling side to side and flaring out his colorful throat feathers.

The male will breed with several females within his territory. But that is the extent of his involvement. The female will build the nest, incubate the eggs, and raise the young on her own.

Nests are often constructed within close proximity to shady streams, in trees or shrubs with good cover such as eucalyptus, Douglas-fir, cypress, blackberry and redwood. These nests occur in a fairly large range of heights from just 2 feet off the ground all the way up to 50 ft.

Nest building takes about one to two weeks. The female will use soft plant materials for the inner cup, hold them together with spiderweb, and camouflage the outside with grass, leaves and lichen. She may build right on top of an older nest, or recycle materials from an old nest for the new one. Eggs are incubated for about 17-22 days, and babies remain in the nest for just over 3 weeks.

Allen’s stick pretty firmly to the land along the shore in California and southern Oregon. In the late summer they head south for central Mexico, around the Mexico City area, to spend the winter.

Some may begin leaving in the northern areas of their range in July, while most head south in August. There is a small pocket around Los Angeles and the Channel Islands where the Allen’s hummingbird remains year-round. The Allen’s that winter in Mexico start to head back north early in the year, getting back to their grounds on the Pacific coast as early as January, but typically February and March.

The Allen’s hummingbird is unfortunately considered a species of concern, and is on the yellow watch list with its species in decline. It is estimated that between 1970 and 2014 their total population decreased by 83%, leaving just over a million total today. Because they rely heavily on a narrow strip of forest along the western coast for breeding, they are sensitive to the increasing urban development happening in this area.

Allen’s hummingbirds will visit backyards and feeders within their range. Like most hummingbirds, a nectar feeder, flowering plants and water are all great ways to attract them to the yard.

1. Males and females spend the summer in different habitats

While they are all along the western coast, males and females spend their time in different habitats. The males stick more to the coastal scrub and chaparral habitat, where they perch on exposed branches to oversee and defend their territory.

Females may visit this area, but they mainly spend their time in more protected thickets and forests where they build their nests.

The Allen’s hummingbird is named after Charles Andrew Allen. Mr. Allen was an American collector and taxidermist who first identified the hummingbird in California in 1879.

3. Allen’s are one of the first migrating hummingbirds to return to the U.S. each year

Allen’s can head back to the U.S. from their wintering grounds really early in the season. In fact, some might leave Mexico as early as December, reaching their breeding grounds by January. Winter rains along their west coast habitat can cause a bloom of flowers. By getting there early, the Allen’s can take advantage of that nectar.