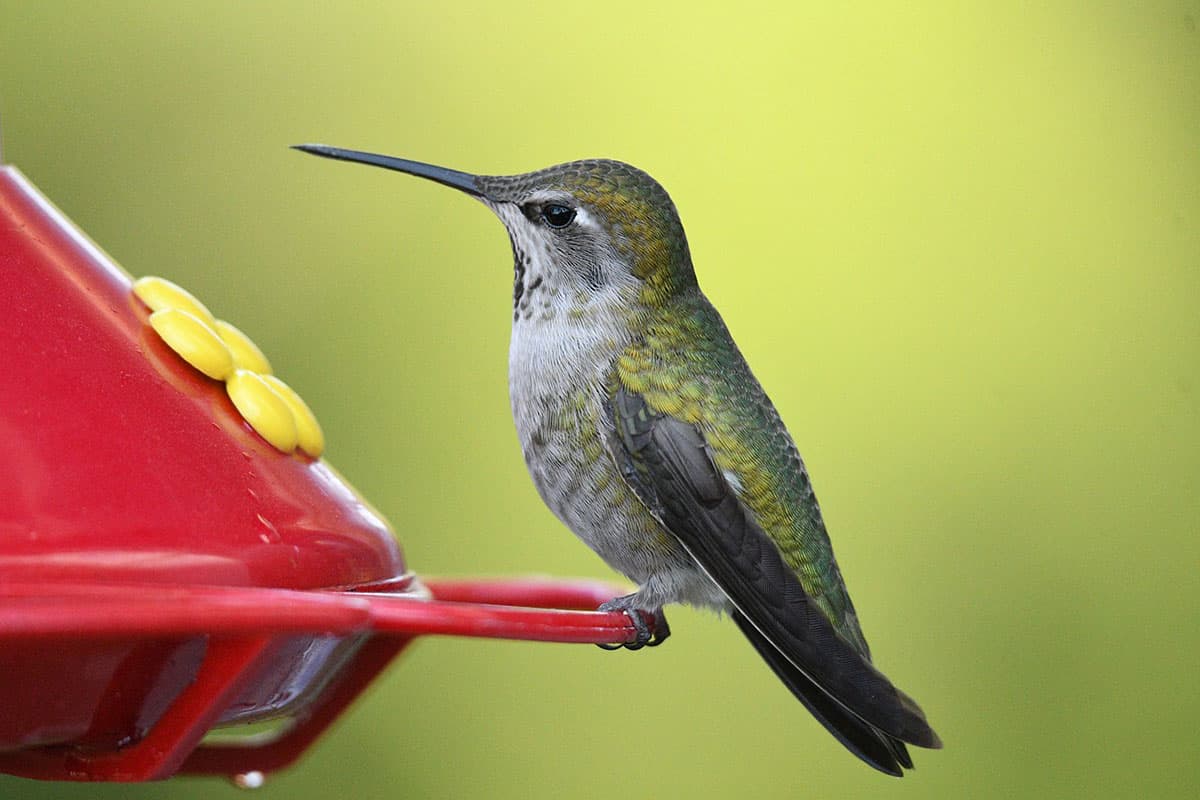 There are 352 species of hummingbirds in the Americas, with as many as 15 of those species regularly occurring in the U.S. and Canada. An additional 9-10 species will occasionally make an appearance in the states and are considered vagrants. The species we’re looking at in this article is the Anna’s hummingbird, a regular resident in the Pacific Northwest, California, and some Southwestern states like Nevada, Arizona, and New Mexico.

We’re about to show you some up-close and personal images of this amazing species, and share some interesting facts and information. Without wasting anymore time, let’s get to the good stuff!

These medium-sized hummingbirds are the most common found along the Pacific coast. Anna’s hummingbird can easily be attracted to backyard feeders just like the more widespread ruby-throated hummingbird.

Anna’s hummingbirds are covered in mostly green and gray, though the males and females are easy to tell apart if you know what to look for.

Male Anna’s hummingbirds have a rose-pink head that can look like a dull brown color if the sunlight isn’t hitting the feathers just right. The brilliant iridescence that you often see, especially in males, is caused by a refraction of direct sunlight.

Female and all immature Anna’s hummingbirds look very similar to one another. They have a metallic green color on top with a touch of reddish-pink feathers on the throat.

An interesting behavior of the Anna’s hummingbird is the unique courtship displays that the males perform for the female during mating rituals. The male will slowly climb to an altitude of 30-40 meters high then rocket down towards the female swooping just inches from her. It’s kind of like he’s buzzing the tower, apparently this impresses her. The below video shows this behavior.

Anna’s are known for being very territorial, especially the males who will fiercely defend their nests. The males will even run off large insects like bumble bees or hawk moths that are simply trying to feed nearby. 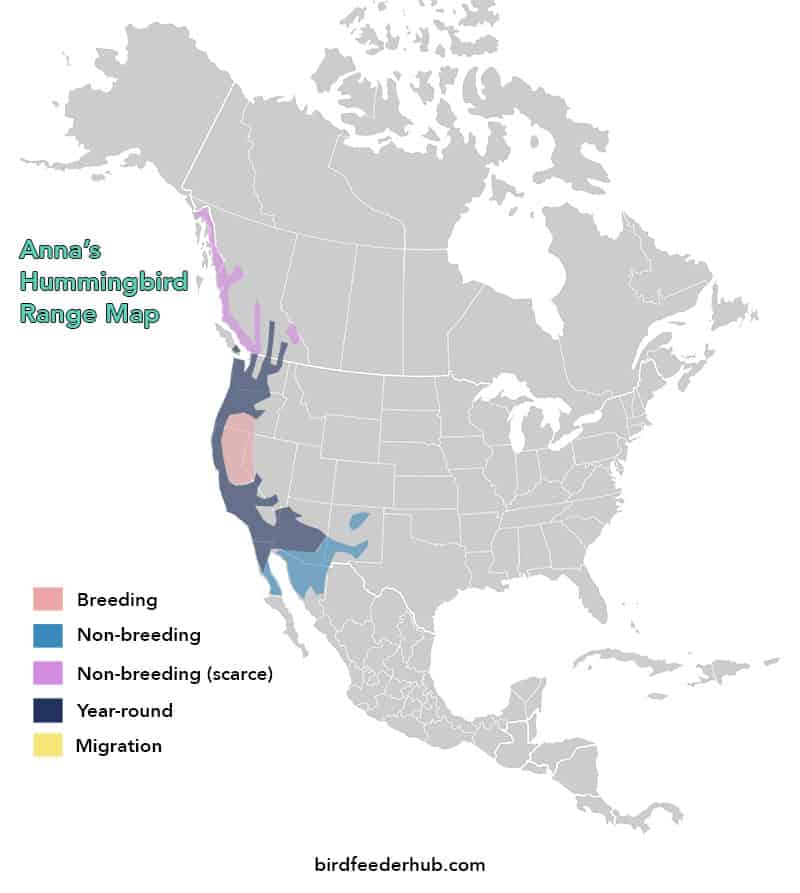 Anna’s hummingbirds are found near the Pacific coast, in some Southwestern states like Arizona and Utah, and also Pacific Northwest states like Oregon and Washington. For most of the early 20th century the Anna’s only bred in parts of Southern California and Baja California.

It’s believed that due to the planting of exotic trees, plants, and flowers, the species was able to greatly expand it’s breeding range. Since then, the hummingbird’s range has been growing. They can even be found as far north as the Alaskan panhandle in the winter months.

In much of this hummingbird’s range it is a year-round resident and does not migrate, so you can keep your feeders out all year long.

Anna’s hummingbirds feed on nectar from flowers but also eat tree sap and a variety of small insects like mosquitoes and leafhoppers. They are known for taking flying insects right out of the air. In addition, they are happy to accept any nectar we want to provide them.

Hummingbirds burn between 6600 and 12000 calories per day, so they need to eat a lot. Hummingbirds also flap their wings 62 times per second, visit as many as 2,000 flowers per day, and consume more than half their body-wight in bugs and nectar each day. Nesting females have been known to eat more than a thousand insects in a single day.

Anna’s hummingbirds are common in a variety of habitats within their range including backyard gardens, open woods, coastal sage scrub, oak savannas, city parks, and other rural areas. Anna’s hummingbirds have adapted to living and thriving near humans.

Like other hummingbirds, individual birds are known for returning to the same feeding or nesting spots year after year. Providing them with food and shelter only helps the Anna’s population. Provide the hummingbirds what they need to survive and your backyard could be a hummingbird habitat.

The mating season for Anna’s hummingbirds is between December and June. The male establishes a territory with suitable shelter and food sources, and attracts a female through the mating rituals we mentioned above.

The female Anna’s hummingbird is the one to build the nest, while the male fiercely protects his territory. She builds the nest out of delicate plant material and uses spiderwebs to hold everything together.

The nest is just big enough for her to sit in and incubate her 2 eggs for about 16 days until they hatch. Once hatched, she cares for the babies for 2-3 weeks until they fledge.

Along with the Allen’s and black-chinned hummingbirds, Anna’s are just one of three species in the United States that may not migrate and live in the same place all year.

For those that do migrate, you can see by the range map above that Anna’s either don’t migrate at all or only a short distance to find a more suitable breeding ground.

There are 4 types of hummingbirds in the Pacific Northwest, once of which is the Anna’s. It is the only species that does not migrate south in search of warmer weather each year. The other 3 PNW species of hummingbirds are the Rufous, Calliope, and Black-chinned Hummingbirds.

The global population of Anna’s hummingbirds is around 5 million breeding birds, with 96% of those being in the United States. The overall Anna’s population has increased by over 2% per year between 1966 and 2014.

Anna’s hummingbirds are thriving alongside humans and their population continues to grow thanks in part to so many people offering backyard feeders and sanctuaries for these amazing animals. They can become prey for cats, so be careful if you own outdoor cats.

Attracting an Anna’s hummingbird is much like attracting any type of hummingbird really, there are just a few things that birds want. They want food, water, and shelter. Offer a bird one or all of these things and you have a decent shot at attracting them to your yard.

1. The average body temperature of an Anna’s Hummingbirds is 107 degrees Fahrenheit

Many Anna’s hummingbirds enter a state of torpor when temperatures get low enough, which is similar to hibernation in some ways. When this happens their hearts slow down, their breathing slows, and their body temperature can drop as low as 48 degrees Fahrenheit.

2. They’re one of 3 hummingbird species that are permanent residents of the U.S.

The 3 species of hummingbirds in North America that are considered year-round are the Allen’s, Anna’s, and Black-chinned hummingbirds.

3. The official bird of Vancouver is the Anna’s hummingbird

Vancouver, a major city in western Canada, named the Anna’s hummingbird as their official bird. It is meant to symbolize the importance of birds to the ecosystem and build awareness about birds in the city. The runner up for official bird was the northern flicker.