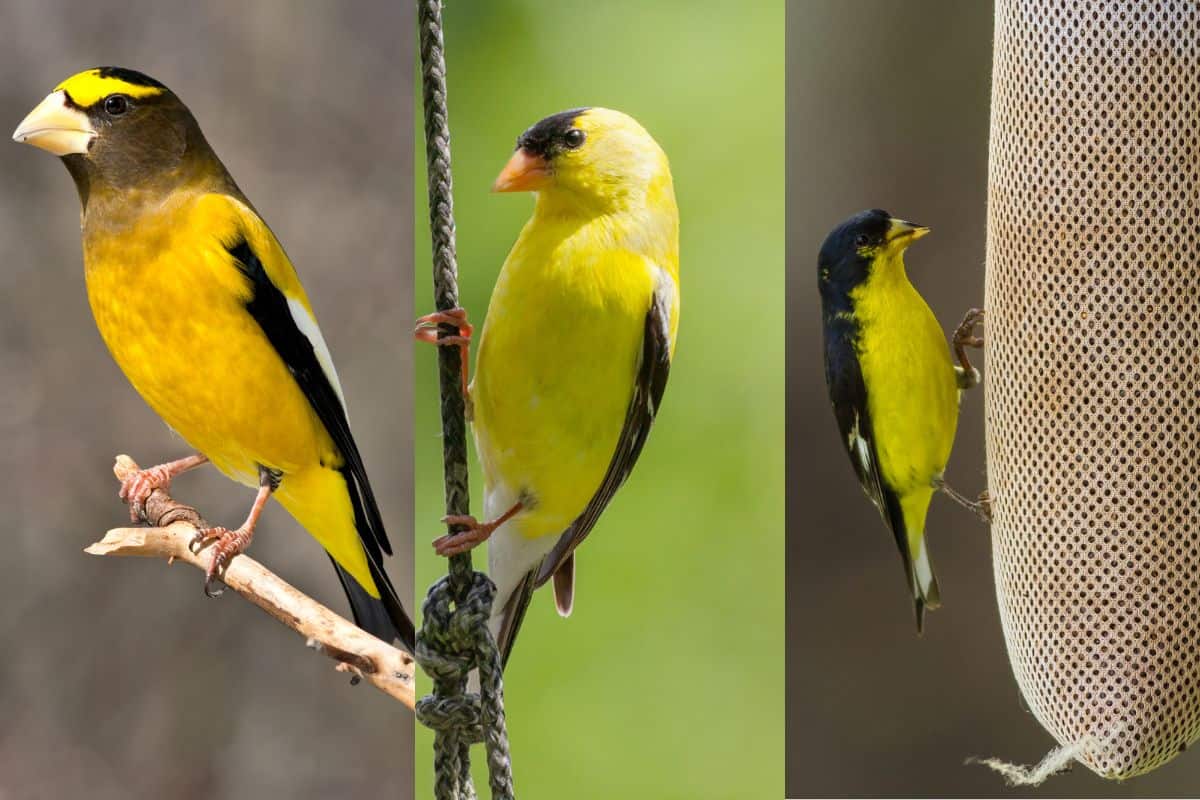 The term ‘goldfinch’ usually applies to a particular species, the American Goldfinch. This small, bright yellow songbird is the state bird of three states as well as a resident of most of the lower 48. Their sweet song and proclivity to visit bird feeders year round make them great backyard visitors. However, it’s easy to mistake other birds for it because of their similar colors and shape. This article takes a look at seven birds in North America that are similar to American Goldfinches.

Keep reading to learn the differences between these birds and their relatives. 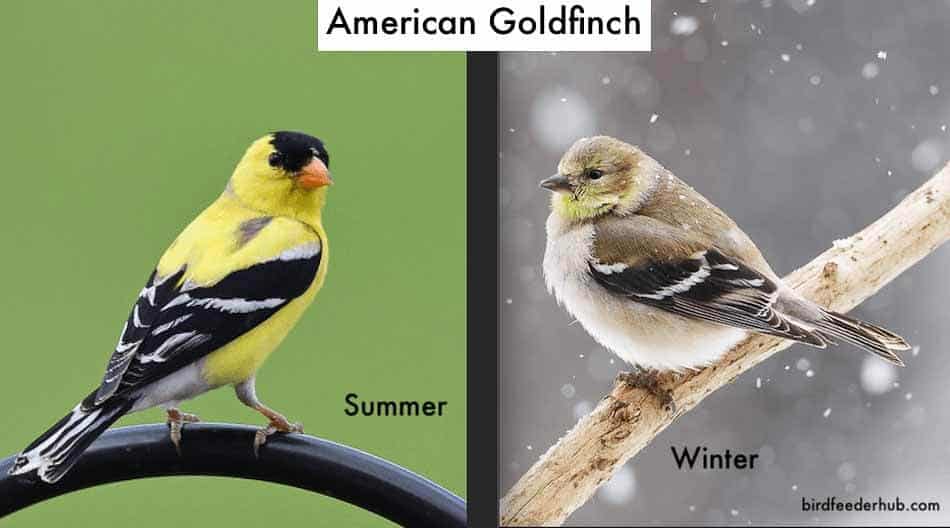 This cheerful finch can be found across the country, although they are year-round visitors in the north and only tend to be winter visitors in California and southern states. They will readily visit backyard feeders, especially for their favorite thistle seed.

American Goldfinches are small birds, with a notched tail and pointy beak. During the breeding season males are bright yellow with black wings and a black forehead. Females are similar but a duller yellow. During the winter, both sexes turn a much more olive color, to the point where people sometimes have a hard time recognizing them.

Their diet consists almost entirely of seeds from flowers, grasses and trees. Now let’s see what birds are similar to this goldfinch.

Like American Goldfinches, the Lesser Goldfinch prefers to eat Nyjer thistle and sunflower seeds. They are avid bird feeder visitors and love to travel in flocks that include other species of finch and seed-eating songbirds. But you’ll only find them in the western U.S.

Despite their small size, Lesser Goldfinches dominate in territorial battles with the Lawrence’s Goldfinch, which has a range overlap in southern and coastal California.

Take a second look, though, and you’ll notice that there are major differences between the two species. Lawrence’s Goldfinch is almost entirely gray or brownish-gray. Their yellow coloring is only found on their wings, and on the chest of males. Males have a black face, which differs from the other goldfinches we’ve mentioned who have black just on the top of their head.

Lawrence’s Goldfinches have a much smaller range than their American and Lesser cousins, making their home in dry, scrubby areas. They enjoy open oak woodlands and the Mediterranean climates of the chaparral of coastal California. They may also be seen in southern Arizona and New Mexico during the winter.

If you see one, it’s reason to rejoice! These birds are hard to attract to feeders, as they lead very nomadic lives. You’re more likely to see one on a hike than you would in your backyard. 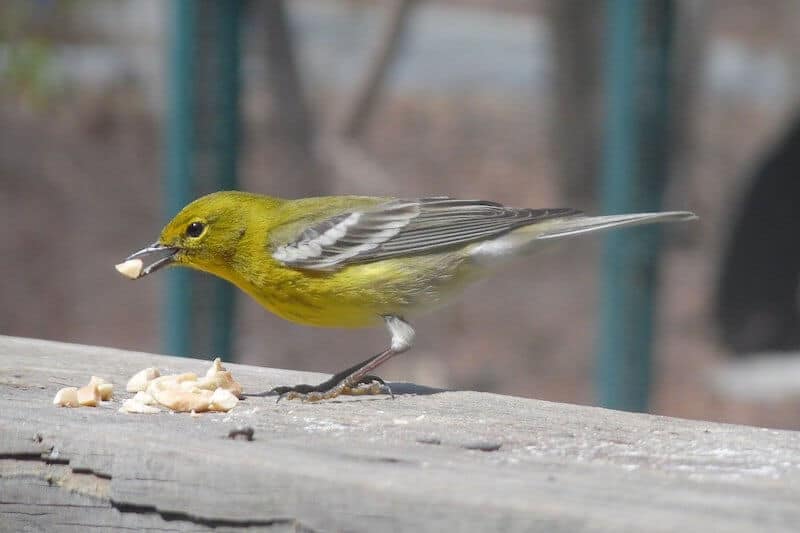 Confusing a Pine Warbler for an American Goldfinch is easy to do. Both birds have yellow fronts and white backsides. Their wings are dark with splotches of white. Take a closer look, though, and the similarities end.

Pine Warblers mainly eat insects, so their beaks are thinner and not adapted to crushing seeds like finches are. Their heads are completely yellow, and you won’t find them in open fields and brush.

These warblers have an apt name; they look for insects among the bark of pine trees. They can be attracted to feeders, however, with a variety of seeds. It’s one of the only warblers that will visit bird feeders! Try sunflower seeds, peanuts, and millet.

It’s unlikely that you’ll mistake a Pine Siskin for a male American Goldfinch. These dusky brown and yellow birds don’t look anything like the bright yellow and black male during the breeding season.

Instead, the Pine Siskin is on this list because it is very easy to confuse it with immature and female American Goldfinches. Both birds love to eat sunflower and Nyjer seeds. They live in overlapping areas, and are about the same size and shape, and may visit bird feeders in the same group.

However, it’s only difficult to tell them apart from a distance. Up close, you’ll see that American Goldfinches have stark color differences between their bodies and wings. Pine Siskins do not, and they really only have small hints of yellow on their wings. Another big difference is their heavily streaked breast and belly.

The Pine Siskin’s call is more muffled and whistly, not a clear series of chirps like its relative. In the U.S. you are most likely to see them in the winter, as most of them breed in Canada.

While these birds share colors that are similar to a goldfinch, that’s about where their similarities end.

Upon seeing an Evening Grosbeak, the first thing you’ll probably notice is just how large its bill is proportionately to its body. The name ‘grosbeak’ actually comes from French for “large beak.”

This finch uses its massive bill to crush seeds that other birds are unable to access. They are much larger birds than goldfinches as well, about the size of a cardinal.

Male Evening Grosbeaks have a bright yellow body, but a dark head with yellow forehead patch. They have a black tail and wings with a large white patch. Their bill is a pale yellow. Females have gray bodies with hints of yellow, and their bill has a pale blue tint.

They’re rarer than American Goldfinches and are more nomadic. Like Pine Siskins, they engage in random, irregular winter migrations every few years. So while they are mainly birds of Canada and the far northern U.S., they are occasionally seen during the winter in random spots around the country.

Look for the Yellow-breasted Chat in the United States only during the spring and summer months. This migrating songbird divides its time between Central America and the lower 48.

You’re more likely to hear this songbird before you see it. Its call is totally different than that of the American Goldfinch. It chirps, whistles, gurgles, and makes noises that sound like human laughter. These vocalizations are only made during the spring when the male wants to attract a mate.

Visually, the American Goldfinch and the Yellow-breasted Chat are only similar in terms of size and color. The chat has a long tail, entirely gray to olive-gray head, back and tail, and yellow breast. These colors could confuse a birdwatcher from a distance. But seeing the white ring around their eye and larger beak should clue you in pretty quick.

This small and delicate bird is a bright patch of yellow in the forests of Canada, the northern United States, and the Pacific Coast. They only spend the the spring and summer in North America, wintering in Central America and northern South America.

Yellow Warblers are entirely yellow, unlike American Goldfinches who also have white and black in their plumage. During the breeding season, males have red-ish brown streaks on their chest.

These warblers are insectivores that rarely visit bird feeders. However, you may be able to attract them to your yard with small trees and water features.