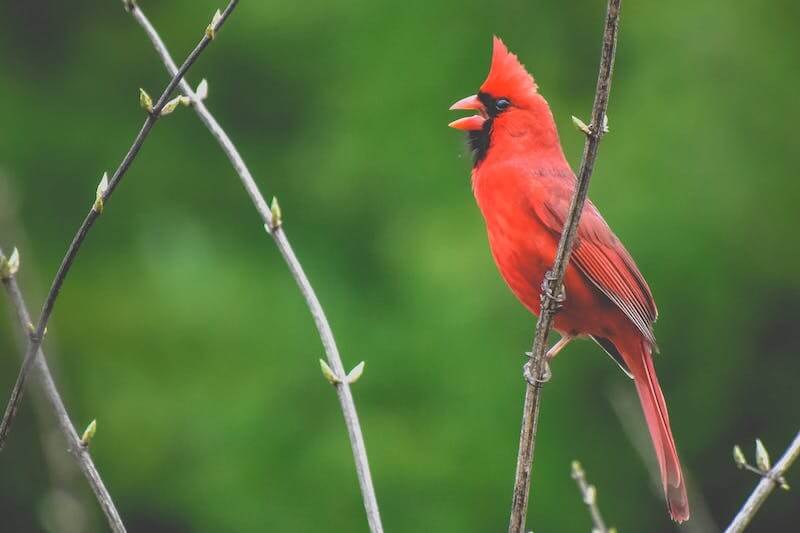 Northern Cardinals lovely colors and songs are a favorite for many in the eastern United States. In this article we will examines eight birds from across the country that are similar to cardinals, whether in color or behavior.

The Northern Cardinal is a well-known and easy to recognize bird. Males boast characteristic red feathers and a bright red forehead crest. They have a black mask around a bright orange beak.

Females are more subtly colored. Her mask is faint and gray, but her beak is still bright orange. Her feathers are tawny brown, tinged with red on the crest, wings, and tail.

Northern Cardinals live in forests and open woodlands east of the Rocky Mountains. They foray into the southwest, reaching southern Arizona and New Mexico. Populations even live in the semi-tropical and tropical climates of Florida and Mexico. Cardinals are relatively easy to attract to yards with sunflower seed feeders.

This songbird is a close relative of the Northern Cardinal. They live in the plains and deserts of the American Southwest. Here, it’s easy to mistake one for a female cardinal, since they have a similar silhouette and crest shape.

Tell them apart by looking at their color and the environment in which you see them. Female cardinals are a light cinnamon brown with an orange beak, while Pyrrhuloxias are gray and have a yellow beak. Cardinals prefer brushy forest areas, while the Pyrrhuloxia loves dry scrubland.

Behaviorally, Pyrrhuloxias differ from their cardinal cousins. They are more gregarious and social, congregating in groups of up to a thousand. Cardinals prefer smaller flocks of up to 25 birds. Both male and female Northern Cardinals sing, but the female Pyrrhuloxia is generally silent.

With its bright scarlet body and deep black facial markings, a birdwatcher could mistake the Vermillion Flycatcher with a male Northern Cardinal. However, the range for these birds barely overlaps, so it’s unlikely you’ll be in a habitat they share.

While the male Northern Cardinal’s body is red all over, the Vermillion Flycatcher has a dark back and wings. The feathers on their head do fluff up a bit, but not in the sharp mohawk shape of the cardinal.

Even so, these flycatchers do have some habits in common with cardinals. Males of both species will sit on exposed perches to sing, and they prefer habitats near abundant water sources.

Both the male Scarlet Tanager and the male Northern Cardinal have bright red feathers. However, the male cardinal is almost entirely red, while the male tanager has a black tail and wings. He doesn’t keep this color throughout the year, either. After the breeding season, male Scarlet Tanagers molt into yellow-green plumage.

You can also tell Scarlet Tanagers and Northern Cardinals apart based on behavior. Cardinals are avid seed-eaters, evidenced by their large bills that are adapted to crushing seeds. Scarlet Tanagers, on the other hand, are insectivorous and rarely visit bird feeders.

While the Northern Cardinal stays in the eastern U.S. year-round, Scarlet Tanagers spend the winter in South America and only enter the U.S. for the spring and summer breeding season.

Phainopeplas’ silhouettes are extremely similar to cardinals’. Both have a long tail and forehead crest. They are even similar in size. However, that’s where the similarities end.

Male Phainopeplas are completely black from bill to tail, while females are a more medium gray. Most have a red eye, as opposed to the cardinal’s black eye. Their beaks are smaller than cardinals’ since they eat fruit, not seeds, and it doesn’t take as much energy to break into fruit as it does a seed hull.

Spot Phainopeplas in the Southwest. They make their homes in areas where they can eat berries and other fruit. Populations have been spotted in oak and sycamore groves in Arizona and California.

You may not be able to attract Phainopeplas to your yard unless you have a high concentration of mistletoe, which makes berries these birds love to eat. Even water features won’t entice them; these birds get most of their hydration from their diet.

Red crossbills are easy to identify, thanks to their large bill. The upper and lower parts of their bill cross over one another. They use it to pull seeds out of pinecones. This adaptation is unique to Red Crossbills, and can’t be seen in Cardinals.

These dusky red birds live in a variety of locations throughout North America. Their range is mostly in the western United States. They live year-round in the Rocky Mountains, the Pacific Northwest, and most of southern Canada.

While the feathers of this songbird are white and gray, it might be easy to mistake it from a distance for a female cardinal. Both this bird and cardinals are common in backyards, have head crests, and blend in with foliage. However, you’ll see differences upon a second look.

Tufted Titmice share the eastern forests with Cardinals, but they dine primarily on insects. They creep through branches and pick their prey off of leaves and twigs. They do also eat seeds though, and you can attract them to your yard with sunflower seeds. It’s common to see the Tufted Titmouse and Northern Cardinal together at seed feeders.

It’s easy to recognize a Tufted Titmouse’s song, which sounds like “peter-peter-peter.” They usually perch high in a tree to sing.

From a distance, the head crest and warm brown tones of the Cedar Waxwing could be mistaken for a female cardinal. However up close, the differences are obvious. Cedar Waxwings have shorter tails and smaller beaks than Northern Cardinals, along with gray wings, a gray tail tipped in yellow, and a yellow belly.

Spot Cedar Waxwings throughout all of the continental United States. They breed in the north and winter in the south. You won’t find them at bird feeders however, as they mainly eat fruits and berries.

With them male Summer Tanager’s bright red body, it would be easy to mistake them for a male Northern Cardinal. But while the male cardinal has a black face, the Summer Tanager is completely red. They also lack the cardinal’s head crest, and have a longer bill that is pale rather than orange.

Summer Tanagers are only found in the southeastern U.S. and along the states of the southern border during the summer. Come fall, they head back south to spend the winter in Mexico, Central America and South America.

Unlike the seed eating cardinal, these tanagers eat insects and specialize in bees and wasps! They are skillful at catching them without being stung.