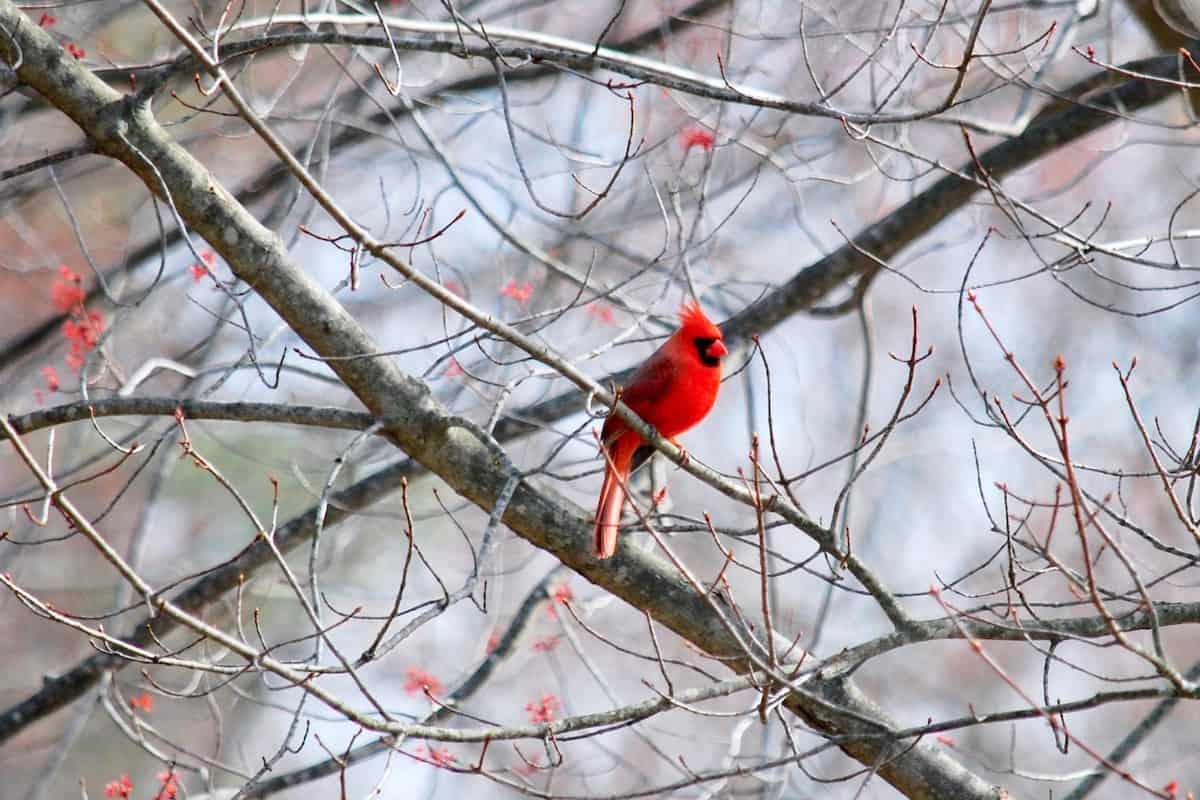 Cardinals are one of the most recognizable birds that you’ll see, not only in your backyards and at your feeders but pretty much anywhere due to their beautiful red feathers. Anytime we see a cardinal at our feeders, especially the males, we run to get our camera or binoculars to try and get a closer look. Because they are so popular there are a million questions people have about them. In this article we’ll answer 19 questions that will provide some interesting facts about cardinals.

1. Do cardinals mate for life?

According to this article by Penn State University, cardinals are monogamous birds and will typically mate for life. Both the female and male will work together during mating season to build their nest together, which takes about 8-9 days.

2. Where do cardinals build nests? 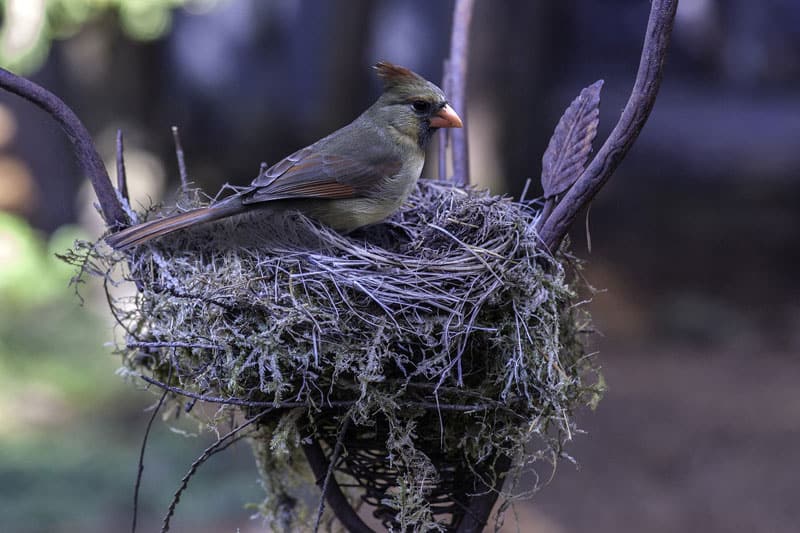 Cardinals are open nested birds and will build their nests out of twigs, pieces of grass, and other plant materials. They prefer building their nests in bushes, dense shrubbery, or low branches that are typically less than 10 feet from the ground.

3. Do cardinals reuse their nests?

Like most birds cardinals do not use the same nest twice and will build a new nest each year, but may use pieces of old nests to build their new nests.

Cardinals do not migrate and will stay permanent residents throughout their range, even in colder climates. They will however stay in the same general area year round.

5. Why are male cardinals brighter red than females?

The likely reason that males are so much brighter red than females is probably what you’d guess, so they can display their colors to females and show them what a good mate they would be! As for the science behind it, there is a compound found in foods that cardinals like called carotenoids which gives them their red color. In humans it’s melanin that gives us our skin color.

6. What do cardinals eat?

Cardinals will enjoy several different types of bird seed including black oil sunflower seeds and safflower seeds as well as cracked corn, peanut pieces and some fruits such as fresh berries. Se our article on what kind of bird seed cardinals like or our bird seed guide which also shows what types of feeders are best for their preferred bird seed.

7. Where do northern cardinals live?

The northern cardinal’s range is all of the eastern half of the U.S., Texas, some southwestern states, Mexico, and parts of Central America.

8. Will cardinals use a birdhouse?

As I mentioned above, cardinals are open nesters and build their own nests. Any attempts to attract them with a nest box will likely be wasted as cardinals are not cavity nesters and will show no interest in birdhouses.

9. How many times a year do cardinals lay eggs?

Cardinals will have one to two broods a year, typically two but as many as three on occasion each season. The female will lay 2-5 eggs each time and those eggs will hatch in approximately 11-13 days from the time she lays them.

10. How long do baby cardinals stay in the nest?

Baby cardinals grow very fast are usually out of the nest in just 9-11 days. This means from the time the mother cardinal lays her eggs that the babies are off on their own in less than 4 weeks.

11. Do cardinals move their babies?

Once the fledgling cardinals have left the nest, the parents will teach them how to fend for themselves and find food. During this period the male cardinal may take charge of the young birds while the female goes off to build a new nest for the next brood of the season.

12. When do baby cardinals turn red?

Cardinals hatchlings start their lives with pink skin with a grayish scaling. When the fledglings grow their feathers in the fall they will begin to look brown with some red undertones but it won’t be until the males reach maturity and molt at around 12 months old that they gain the beautiful red colors that we associate with cardinals.

13. When are baby cardinals born? 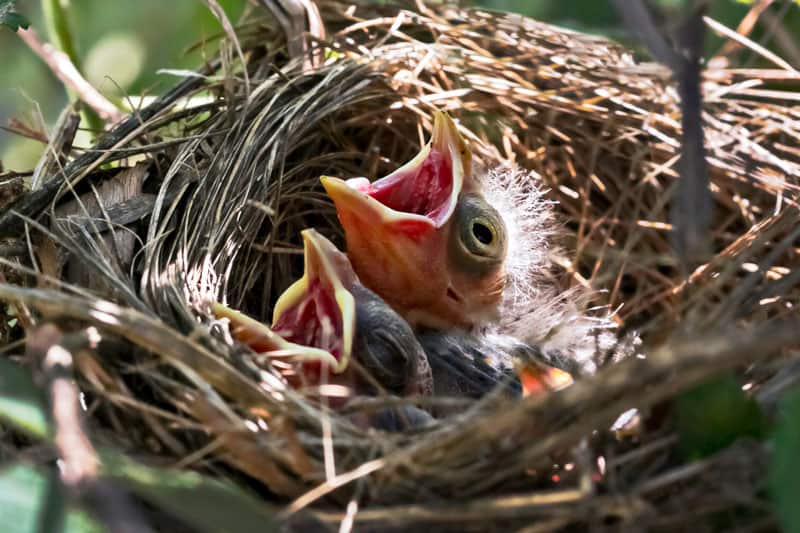 As we touched on above, baby cardinals hatch about 11-13 days after the mother lays the eggs. The first brood is usually in March sometime with the next one immediately after those babies have left the nest, typically in May.

14. How long do cardinals live?

In the wild the average lifespan is only around 3 years for the northern cardinal, but this isn’t due to old age. There are a number of predators and other things that can end a cardinals life. They have been known to live up to 15 years in the wild in some cases and there is one report of a cardinal living 28 years in captivity (last sentence).

15. What does it mean when you see a red cardinal?

If you see a red cardinal in your dreams it is seen as a good omen and is usually associated with good fortune. Cardinals are also thought to be good luck and associated with the number 12, which is considered good luck to native americans. Seeing a cardinal gets much more spiritual if you are interested in that type of thing.

Especially during mating season, male cardinals can be very territorial when protecting their breeding grounds and their young. While the female incubates the eggs it is the males duty to protect both the female and the nest from any predators and intruders in the area, and they will do so fiercely.

17. How many types of cardinals are there?

There are 4 different types of cardinals but the northern cardinal is the one most people think of whenever the bird is mentioned. Between the 4 species they can be found in areas of North, Central, and South America.

18. Do all cardinals have orange beaks? 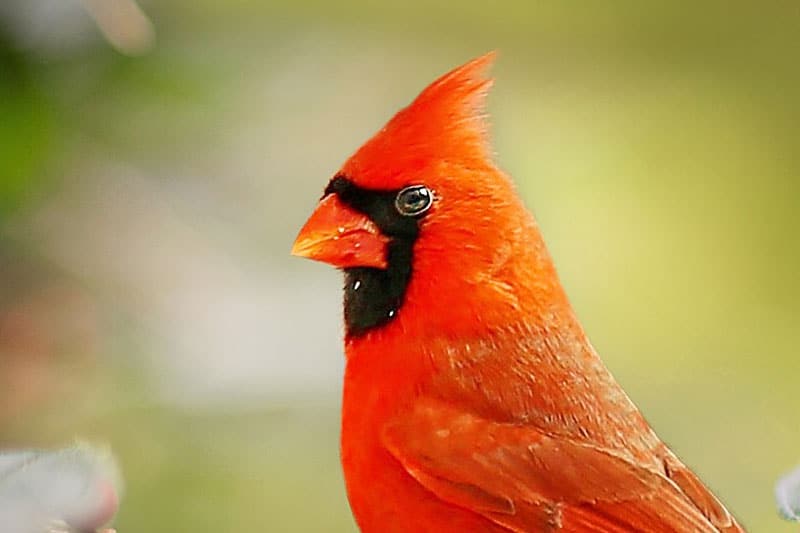 Both the male and female cardinal have reddish orange beaks. Juvenile cardinals are easily recognized by their black beaks. When the young cardinals transition to adults, after their first molt, their beaks will change to the orange beaks you are used to seeing.

19. Do cardinals feed each other?

Yes, you may have seen this before. The male cardinal is known for feeding the female cardinal beak to beak as part of the mating behavior. This sort of bonding between the male and female is very common and makes for a great picture if you can catch them in the act!

20. Are cardinals scared of blue jays?

We know that blue jays have a reputation for being bullies at feeders and are even known for going after other birds’ eggs, but do they scare cardinals away. Blue jays have an easier time bullying the smaller birds like titmice and perhaps sparrows. So my answer here would be that cardinals may not be scared of blue jays but they may also not always share feeders. See the video above showing a male cardinal and blue jay politely taking turns on a feeder.

21. Why do cardinals tap on windows

As I mentioned, cardinals are known to be territorial birds and may see another bird as a threat. Any time you see a cardinal, or any bird, pecking or tapping on a window he has most likely seen his own reflection and is challenging himself!