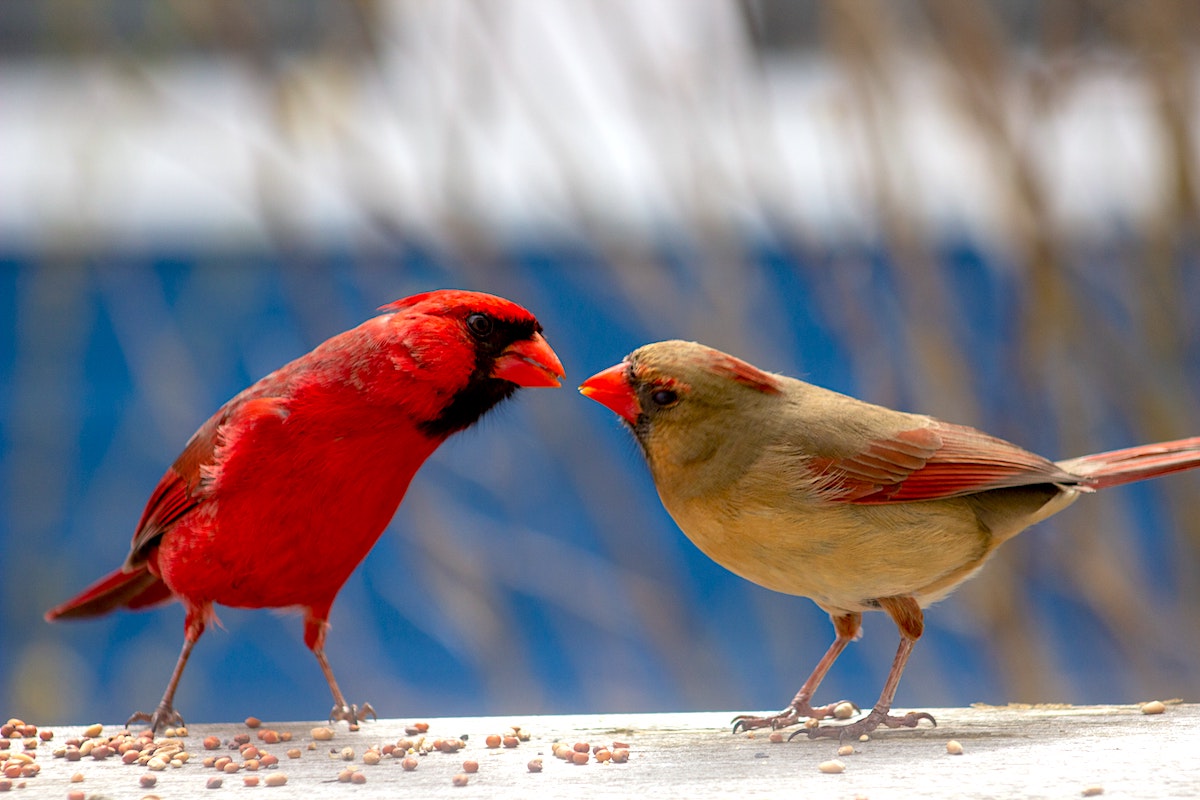 Cardinals are common birds that are brightly colored and hard to miss. With their eye-catching beauty and loud melodious song, it’s no wonder they have inspired folklore and myths. In this article we’ll give you insight regarding cardinal dreams, tattoos, totems, spiritual relevance, various cardinal symbolism, and more.

What does a cardinal symbolize?

While more than one bird in the world shares the name cardinal, for the purposes of this article we will be discussing the Northern Cardinal, found throughout the eastern U.S., Canada and Mexico. Cardinals beautiful plumage, their behaviors and their songs all contribute to their various symbolic meanings.

Here is some of the most common symbolism associated with cardinals:

Cardinals are generally monogamous birds that mate for life. Males and females work together to build nests and look after their young. Because of this, they are often associated with love. Cardinals are symbols of romantic partnership and devotion.

The bright red color of the males, which they use to attract females, is also associated with love. Just think about valentines day and hearts, we have long associated the color red with love and passion.

Male cardinals are loud singers, especially during the spring. They perch at the tops of trees and spend much of the day sending our their whistling calls. Females are as skilled, but they do also sing.

This is a very familiar sound to those that live in the same area as cardinals, and most people say their song sounds happy and brings them happiness when they hear it. In fact, bird watchers often use the word “cheer” to describe the sound of the cardinals whistle, as in “cheer-cheer-cheer”.

Cardinals are non-migratory birds, so within their range they remain within their territory all year. Many bird watchers feel seeing cardinals is pretty dependable, as they can be spotted in all four seasons of the year. This also means that in general families tend to stay together much longer than other song birds.

Many cultures looked upon cardinals as birds with positive associations, sometimes even as favored by God to deliver heavenly messages. For this reason, seeing cardinals is often taken as a sign of good fortune. Seeing a bright red cardinal amidst the snow or dull colors of winter can be quite a hopeful and invigorating sight. This is likely another reason they are seen to bring hope and good fortune.

Birds that are quiet and like to stay hidden amongst trees and shrubs have historically been considered secretive, mysterious, and non-trustworthy. Cardinals are quite the opposite, with their flashy colors they are easy to spot and are fairly comfortable around humans and don’t hide themselves away in thick vegetation.

But more than that, they are loud singers. Both males and females sing, which is unusual among songbirds where usually only males sing. Because both sexes have the ability to sing, and do so often and loudly, they were viewed by many cultures as honest and trustworthy, rather than secretive.

Cardinals have long had associations with God. They are viewed as visitors from heaven, or being able to travel between the earth and heaven. Cardinals have also been associated with angels or traveling with angels. In this way people often view them as bringing messages from loved ones who have passed away, or God sending them as messages of hope to uplift the spirit.

What Do Cardinal Dreams Symbolize?

Due to their association with love and romance, dreams of cardinals are often thought to mean that new love will soon be coming into your life. If you already have a partner, it could indicate a particularly romantic encounter will soon take place, and you may share a renewed passion with your significant other.

If you have recently felt tired, run down, or stuck in a rut, a cardinal dream may indicate that you will soon find renewed energy.

Cardinals are associated with good fortune, and when seen in dreams can indicate a positive turn of events for your career or health. If you have been worried about the outcome of an upcoming even, a cardinal indicates that you will have success.

If you see a flying cardinal: make sure you are communicating your thoughts and feelings to those around you

A Cardinal crosses your path: make sure you stay grounded in the face of success

If you dream about a pair of cardinals: you may see the arrival of a new member of the family, or will have to use teamwork to complete a project.

A you dream of a dead cardinal: this can indicate a chapter of your life is coming to a close and a new one will soon begin.

Flying with a cardinal: If you are flying with the cardinal as you sleep, you’ll see that from the perspective of a bird flying high above the earth, your concerns are in fact very small. The dream of a cardinal should help you to stay on your path and reach your goals without letting your problems bring you down. Take inspiration from the feeling of soaring in your dream to rise above anything that stands in your way.

Dreaming of a cardinal can also mean that a loved one who has died is visiting you. Sensing their presence in your sleep will hopefully bring you peace and comfort when you wake.

Symbolism in Visits or Encounters with Cardinals

The meaning of an encounter with a cardinal can change depending on the time, place, and details of the visit. For example, if a cardinal comes to visit you shortly after the loss of a loved one, many cultures interpret this as a sign your loved one is still watching you and wants to encourage you to keep moving forward. There is a common saying “when cardinals are here, angels are near.”

Cardinals can also be signs of good luck and prosperity coming in the near future. If you encounter a cardinal while you are in the middle of deciding whether or not to take an opportunity, it’s seen as a sign that you should go forward with the project.

Cardinals are among the birds that are monogamous and stay with a partner for the long term. A pair of cardinals will work together to raise a family of little birds and live happily together. Because of this, seeing a cardinal on your wedding day is said to be a lucky sign of a future happy marriage.

However, even if you don’t hold any particular symbolism to cardinals, most people would agree they are one of their favorite birds to see in the yard. You can easily attract cardinals with sunflower seed and bird feeders. 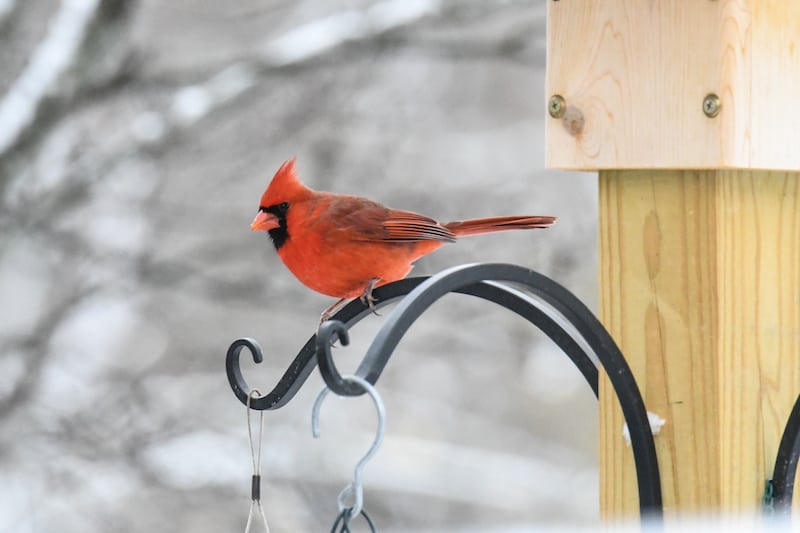 Cardinals are early to rise, sing boisterously, and catch your eye with their colors. The cardinal spirit animal can encourage you to find your own voice and be true to your unique self. Recognize your own personal power.

The cardinal spirit animal is also associated with being stubborn in terms of achieving your goals. They encourage you to tap into your own self-reliance and discipline to make it to the end of long term commitments and goals.

With a cardinal as your totem animal, you are likely to have a resilient spirit and be ready to face anything that comes your way without fear. This is because cardinals are known to be visible and active every month of the year regardless of cold weather.

Unlike other birds that move to a warmer climate when the weather changes to become cold, cardinals stay in place for the duration of the winter, tolerating whatever weather and hardship comes in the process. This has earned them a reputation for being tough, determined, and able to withstand anything. People who have a cardinal as their totem tend to have this same resilience and ability to handle any challenges that present themselves.

Spiritual and Cultural Meaning of Cardinals

Cardinals are only native to North America, and therefore are not directly mentioned in the Bible or scripture. However they have long been associated with God, specifically being able to carry messages from God.

Some feel the cardinal is a good representation of the Holy Spirit. The red of the cardinal symbolizing the blood of Christ and his gift of eternal life.

Seeing a cardinal nearby is said in some cultures and belief systems to mean that angels are present. While you may not be able to see the angel, the cardinal gives you a visual sign that a heavenly being is nearby visiting you on Earth.

The cardinal is meant to show you that your lost loved one is encouraging you to go forward. In times of mourning, seeing a cardinal can help the grieving feel that their loved one is never far from them.

Native American cardinal symbolism varies by tribe, with many tribes having a legend that centers around the bird. While the stories can vary in detail, the bird does have a significant role in the traditions of each one.

For example, the cardinal was said to be the embodiment of the sun’s daughter by the Cherokee people. The vibrant red of the bird was given to the species by the sun so it could easily be followed wherever it goes. Cherokee mythology says that seeing a cardinal flying into the sun is a sign of good luck.

The Choctaw people had a story about a cardinal that played matchmaker. In many tribes, the association was made between cardinals and love, and they were seen as omens of future relationships or relationship success. 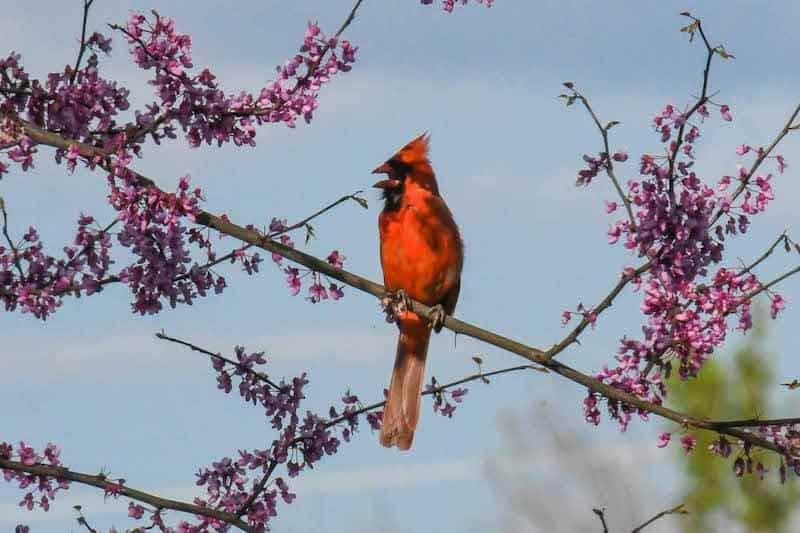 While each person has their own reasons for choosing a cardinal for a tattoo, some of the most common meanings are:

Cardinals are often seen as good luck or a sign of positive encouragement, and they are known to signal the presence of a fortunate opportunity in your life. As cardinals are known to be resourceful, seizing on opportunity to find food and other elements they need to survive, a visit from one can often coincide with the start of an opportune time in your life. A cardinal sighting at such a time can be a signal that you should press forward and expect only the best luck when you do.

Beautiful and dignified, there can be many meanings attributed to the cardinal across cultures or religions. The next time one crosses your path, or you hear the beautiful birdsong coming from one, take a minute to appreciate this natural wonder and the resilience it symbolizes.

Cardinals have been said to symbolize a range of meanings, from the spirits of loved ones watching those on Earth to an opportunity for a new beginning in life. An encounter with a real-life cardinal is typically seen as a good omen, a sign that you should keep going on your current path, or a positive sign of a loved one who has passed away smiling down on you.