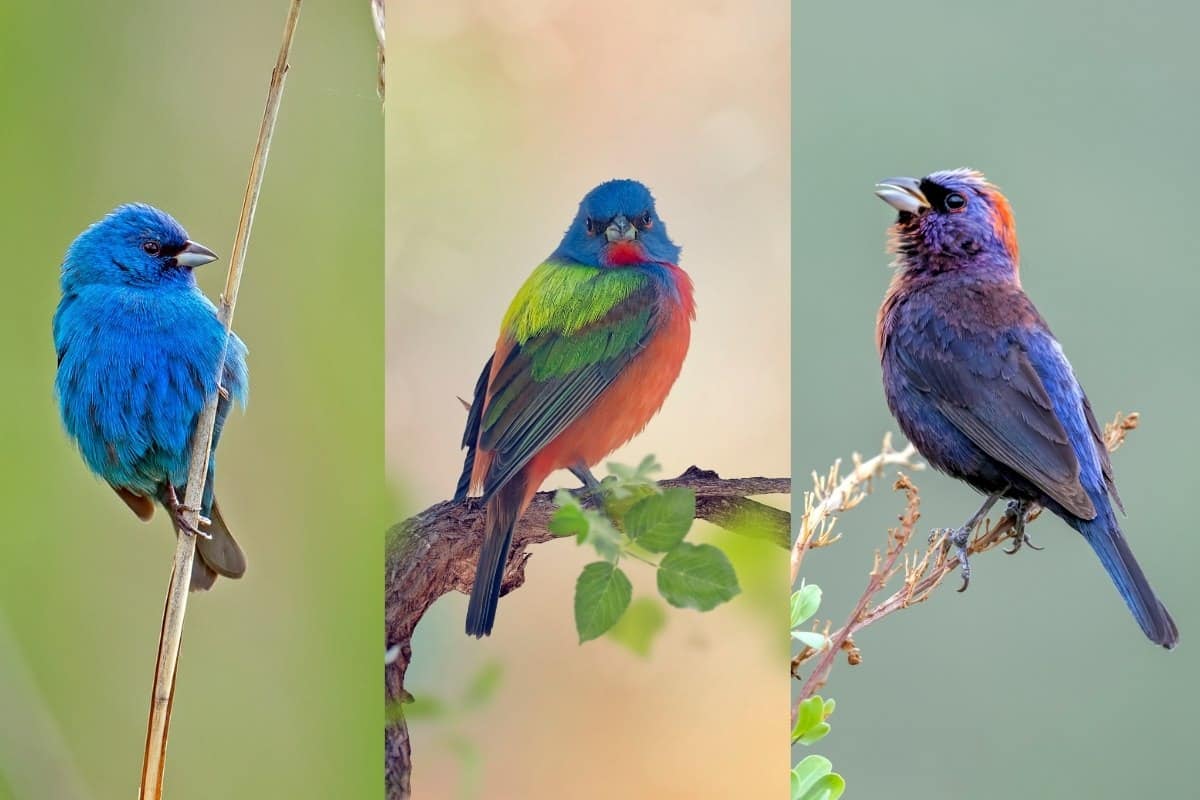 Straight out of a coloring book, the Painted Bunting is a small bird with a unique color scheme of blue, green, yellow, and red. They are some of the most brightly colored birds in the U.S. While the Painted Bunting may be in a class of their own, there are other birds that stand out with their vibrant colors. There are also other species int he bunting family that share characteristics. In this article we will look at 8 birds similar to painted buntings.

First, let’s take a look at the striking Painted Bunting

The adult male of the species is a watercolor painting with a blue head, yellow-green back and red breast. However young birds and adult females are a solid bright yellow-green all over. The Painted Bunting spends its winters in Central America, southern Mexico, the Caribbean and south Florida. During the summer breeding season, they migrate to the southeastern coast of the U.S. as well as norther Mexico, Texas, Oklahoma, Louisiana, Arkansas and parts of Mississippi.

These buntings, like many others in the bunting family, like to stay fairly well hidden in dense habitat. However they will sometimes visit backyard feeders for seeds, especially during migration or winter months. They are quite territorial during the breeding season, but in winter they may join flocks of other seed eating birds. They take advantage of plentiful insects during the summer while nesting, and the female can construct her nest in as quickly as two days.

Now let’s take a look at some birds that share similarities with the Painted Bunting.

Another member of the bunting family with a similar shape and vibrant pattern of colors is the Varied Bunting. However this bird replaces the blues and greens of the Painted bunting with reds and purples. Males have violet on their head, wings and tail with a red wash on their chest and upper back. They also sport a bright red stripe on top of their head. Like other bunting species, females do not share this coloring and are a nondescript tan.

Varied Buntings display different color variations based on their location and habitat. For example, some might have a darker-colored bill while others are lighter-colored. The habitat of the Varied Bunting is usually in canyon forests and shrubs in desert washouts. They prefer to nest in thorny shrub areas for protection from predators. There are few places in the U.S. you can find them, including western Texas and the far southern borders of Arizona and New Mexico.

The Indigo Bunting is a beautiful member of the bunting family with a wow factor to match their Painted cousins. The main difference between the birds is their color pattern. Indigo Buntings are nicknamed “blue canaries” with good reason. They are a bright vibrant blue all over, with their body being slightly lighter in color than their head. Females are a cinnamon brown with white breast.

Indigo Buntings are songbirds and can be heard singing from their perches in the spring. Males and females forage in pairs when searching for food. Interestingly, young Indigo Bunting males learn their songs from older males in their territory. Their songs can be completely localized to one area and remain the same for up to 20 years.

Like the Painted Bunting, they spend their winters mainly south of the U.S. and only travel north to breed. These buntings have a wider breeding range in the U.S. of most of the eastern half of the country.

Another beautiful member of the bunting family is the Lazuli Bunting. They have a sky blue head and back with a rust color on their breast that fades to white on their belly. Males are more brightly colored than females. They’re also characterized by a white shoulder patch that stands out when perched or flying.

Lazuli Buntings usually live in dry brushy hillsides or thickets of bushes of the western U.S. When it comes to visiting bird feeders they are a little more brave than their Painted cousins, and especially love white proso millet seed.  Male Lazuli Buntings are more vocal than females and are heard during mating season. The songs of male Lazuli Buntings are unique to that individual each time they sing.

The Lesser Goldfinch, with green, yellow, and black feathers, can be found in scrubby oak or cottonwood habitats or suburban yards to gather seeds. They are most commonly found in California and Texas, but also exist as pockets of local populations throughout other regions in the U.S.

These finches like to eat seeds of plants in the sunflower family. You will see them mixing and mingling with other small birds around feeders. They often sing snippets from the songs of different birds. This is likely due to their flocks mixing in with other songbirds. The Lesser Goldfinch is similar in size to the Painted Bunting and shares the yellow coloring of the females and immatures. However the Painted Buntings are more of a green-yellow while the Lesser Goldfinch is a mix of bright yellow and olive.

Blue Grosbeak often build their nests near a shrubby environment. Mating pairs will generally produce two broods per year. The Blue Grosbeak has a much thicker bill than buntings. They’re also quite a bit larger than a Painted Bunting.

Dickcissels are named for the sound of their call, which is described as a buzzy sounding “dick-dick-see-see-see”.  Dickcissels are often seen perched on fences and shrubs, plucking seeds from tall grasses where they live in the U.S. Plains region. They are noisy birds, and they often sing in the morning and at night.

While they share some bright yellow coloring and body shape of the Painted Buntings, overall their plumage is much less colorful. Their yellow feathers are limited to their face and chest, while the rest of their body is shades of brown and gray similar to a sparrow. They are chunky little birds with thick short beaks and males have a dark black V on their chest, whereas females do not.

Like the Painted Bunting they eat both seeds and insects, and migrate into the U.S. during the spring and summer. However they enjoy a much different habitat, preferring grasslands and prairies found in the middle of the country.

The Western Tanager shares the title of bright, multi-colored bird with the Painted Bunting, although the Tanager comes is shades of the sunset. Males have a bright orange and red head, a yellow body, and black on the wings and tail. They lack the bright blue and green of the Painted Bunting. Western Tanagers get their red pigment from eating insects that contain rhodoxanthin. This is unlike other red-colored birds that get their coloration from eating certain plants.

Like the Painted Bunting they migrate north into the U.S. to breed, although they have a much different range. The Western Tanager prefers the open woods of the western U.S. and Canada. These small birds like dense vegetation to nest in. They often nest in coniferous trees on the ends of long branches. Depending on their location, they’ll feed on different tree nuts.

Male Rose-breasted Grosbeaks are brilliant black with red and white and have a thick, large bill. They are similar to Painted Buntings in shape, but Grosbeaks are larger. While both birds display bright color variations, the Grosbeak does not have vibrant blue and green like Painted Buntings.

The Rose-breasted Grosbeak is typically found in forest edges or woodlands. They winter in many of the same locations as the Painted Bunting, but when they migrate they travel much further north. They prefer the deciduous wood habitats of Canada and the northeastern United States during the summer breeding season. This songbird sounds like American Robins but with a little more sweetness in their voice. Males have a distinct call that is commonly heard in North American forests.