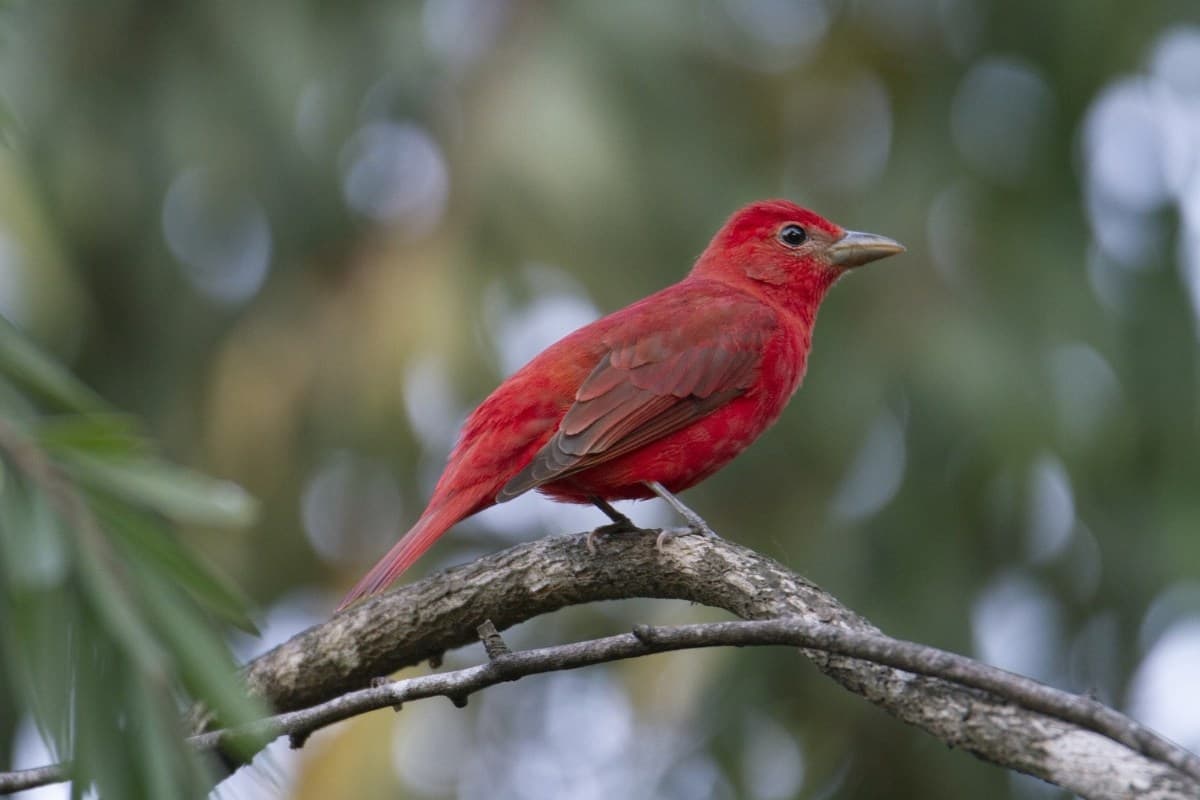 Many birds eat insects, but few make bees the foundational part of their diet. A handful of songbirds in North America regularly consumes bees. Others incorporate bees as a part of their insect diet. These birds use various methods of catching the bees to avoid being stung. Some of them rub the bee along a branch to remove the stinger. In this article we will look at 10 species of birds which regularly eat bees. Let’s look at these interesting birds behavior, eating habits, and preferred habitats.

The Scarlet Tanager is often known as a ‘bee-eater’ because it relies so heavily on bees for its diet. This tanager doesn’t like only bees, though. It enjoys a variety of insects including cicadas, beetles, termites, dragonflies, grasshoppers and moths.

Scarlet Tanagers live in the tops of trees in thriving deciduous forests, where they’re more likely to see insects returning to hives and nests among the branches. Some insects they will grab off of leaves, tree branches and flowers. However when it comes to bees, wasps and hornets, they usually catch them in the air.

The Scarlet Tanager can be found in the eastern U.S. during the spring and summer, heading back to South America for the winter.

Birdwatchers in the Southeast and Southwest will be able to spot the Summer Tanager in the spring and summer. A relative of other red birds the Scarlet Tanager and the Northern Cardinal, the Summer Tanager is an insect-eating bird that eats just bees and wasps.

Summer Tanagers prefer open forests with a mix of deciduous trees and shrubs. They catch wasps and bees while flying, beat them against a branch, then eat them. Wherever they live in their range, they choose the lower-elevation habitat zones.

Attract them to your yard by planting trees and shrubs that bloom and attract pollinators. They occasionally eat fruit, so berry bushes are a great idea too.

Purple Martins are some of the most gregarious songbirds in the swallow family. They live throughout the East and the Midwest as well as in small strips of habitat along the West Coast and in the Southwest.

Look for them flying acrobatically after insects, which they hunt mid-flight. Bees and wasps are included in their diet, as well as various species of flies, beetles, moths and spiders. They sometimes swallow small bits of gravel, that help them digest the hard exoskeletons of some of the bugs they eat.

It’s common to set out nest boxes for Purple Martins in the eastern U.S. They nest in apartment-like, multi-compartment boxes that can be seen up and down the coast. Out west, they nest in old snags and woodpecker holes.

The diet of the Northern Cardinal consists mainly of seeds and fruit. However like many songbirds, they will supplement their diet with insects, especially during the summer breeding season. Among other insects, they will go after bees while they’re active in the warmer months.

Attract Northern Cardinals to your backyard by offering sunflower seeds. They are year-round inhabitants of most of the eastern and southwestern United States.

The Red-bellied Woodpecker is native to the eastern forests of the United States. They flit between the upper canopies of the trees in dense deciduous landscapes in search of insects in the bark of tree trunks.

Many kinds of bees make hives in snags and amid live tree branches. When a Red-bellied Woodpecker spots a hive, they may go after the bees themselves as well as the sweet honey within.

The Cassin’s Kingbird is a notoriously loud songbird that makes its home in the dry deserts of the Southwest. They love to sit on exposed perches where they can spot insects flying at eye level. Once spotted, they will fly out and snatch the bug from mid-air. Everything from bees, wasps, crickets and cicadas are fair game.

They aren’t afraid of danger – not only do they eat bees and wasps, but males will even attack hawks that enter their territory.

They won’t typically visit a backyard, but you can see them at dawn or hear them singing at night, where their call sounds like a “ti-bew.” 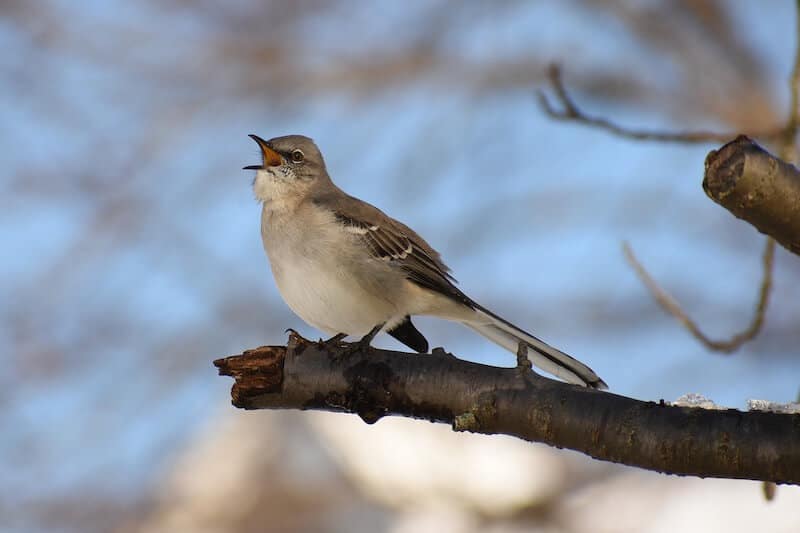 The Northern Mockingbird is a well-known sight across the entire United States. They are known for their ability to mimic the calls of other birds, and for fiercely defending their territory.

They mostly consume insects during the summer when populations are plentiful. Along with bees and wasps, ants, earthworms, moths and grasshoppers are consumed. In the fall and winter, they switch over to a diet of mostly berries and fruits.

Hermit Thrushes are delicate brown and white inhabitants of Canada and the United States. During the spring, spot them in Canada and the Rocky Mountains. They winter in the Southeast and along the West Coast.

Like Northern Mockingbirds, they make meals of insects during the spring and summer. Bees, ants, wasps, caterpillars, and beetles make their way onto the menu. They aren’t common backyard visitors so you’re most likely to see them during hikes or walks in rural woods.

The Chimney Swift is easy to spot when it’s on the wing. They have long, slender wings and a cigar-shaped body. It’s native to the eastern and midwestern United States during the spring and summer months. These members of the family Apodidae have very weak leg and feet muscles. As a result, they spend most of their life in the air – not a problem since they can hunt insects mid-flight.

Chimney Swifts look for bees during the daytime when they’re active. They eat a variety of other insects, pretty much anything that they can catch in the air. You may spot them swooping around in the sky, as they like to feed over residential neighborhoods, orchards, open fields and marshes.

Seen only in California, the Yellow-billed Magpie is a highly intelligent relative of the raven and crow. Spot them on the Central Coast, Central Valley, and along the foothills of the Sierra Nevada mountains.

These birds are omnivorous and intensely curious. They commonly eat trash, grain, and small mammals, like most magpies. However, insects, including bees, make up a large part of their diet. They search the air and ground for fresh meals, foraging straight from the leaf litter as well as in the air.