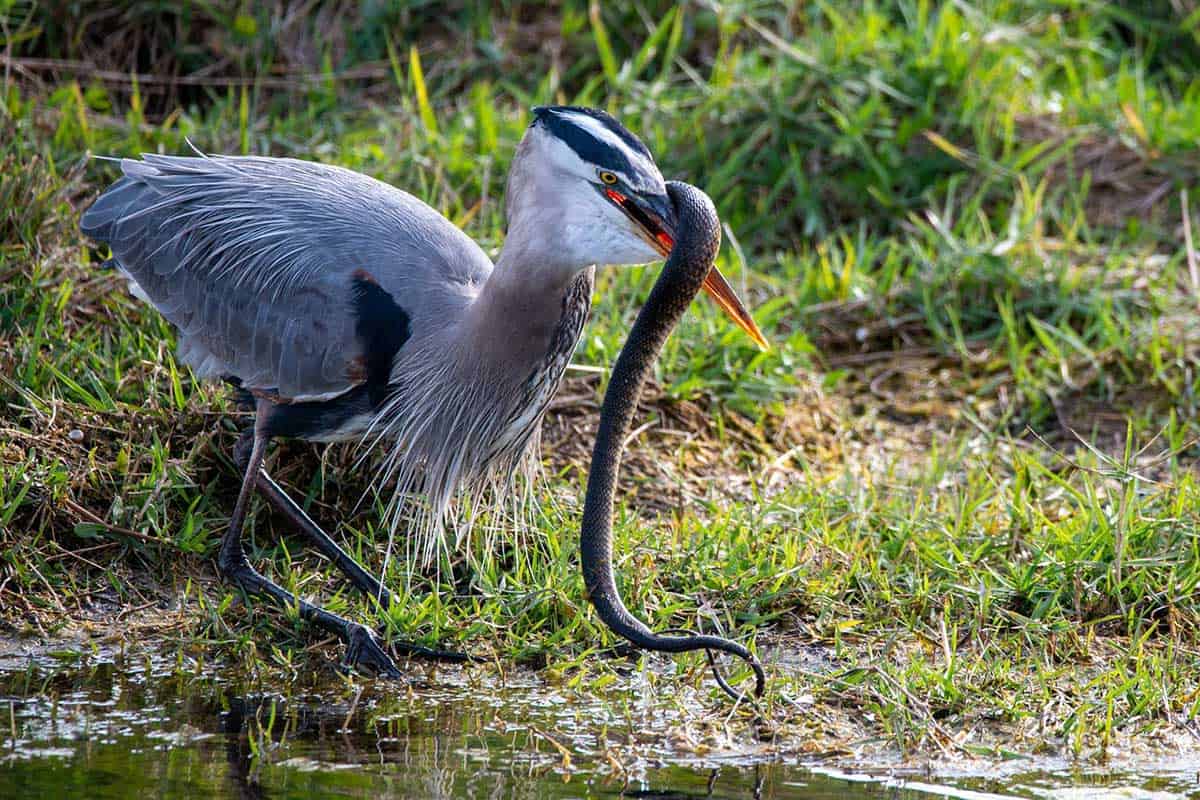 Ophiophagy is the latin term for the act of preying on snakes. Animals that eat snakes are ophiophagous, which is just a fancy way to eat snake eaters. This is actually where the latin name for the King Cobra comes from. In many cases, birds are the ones being eaten by snakes, but you may be surprised that there are many different types of birds that tend to eat scaly serpents. In this article we will take a look at 15 ophiophagous birds, or birds that eat snakes.

15 Types of Birds that Eat Snakes

Eating snakes is not just limited to birds of prey as you might assume. You may be surprised to see that even some more common birds eat snakes! Snakes are eaten by water birds, birds of prey, and domestic birds to name a few.

The large talons and quick speeds of a hawk allow for them to quickly and efficient pick off snakes. Hawks swoop down once they have spotted their meal and flap their wings to distract the snake before quickly grabbing it behind the head to carry it away.

Hawks don’t just limit their diet to non-venomous snakes but will also eat venomous snakes. This has proven to be deadly for some hawks that were bitten while trying to carry off venomous snakes, but these unlucky hawks are typically young or inexperienced hunters.

Owls are not really picky and will eat anything, making snakes a welcome snack!

Like Hawks, Owls have large talons and sharp beaks- perfect for digging into a snake. Owls also have incredible eyesight that makes spotting a snake a piece of cake. Even baby Owls will eat small snakes (like blind snakes).

Crows are known for being scavengers and eat both live and dead animals. Crows probably chow down on any dead snakes they can find, but they have also been known to eat live snakes. They aren’t large birds in comparison to some of the other snake eating birds on this list, so Crows tend to eat smaller snakes such as garter snakes.

Like other birds of prey on this list, Falcons also have been known to eat snakes. One Falcon in particular, the Laughing Falcon is notorious for eating snakes in it’s range in South and Central America. Laughing Falcons even eat highly venomous Coral Snakes.

Eagles are known to eat and prey upon some pretty big and even dangerous animals. Many different types of Eagles eat snakes, and there are even several types of Eagles called Serpent or Snake Eagles that specialize in eating snakes.

There are species of Serpent Eagles that live in Asia and Africa that have evolved to safely eat snakes, even venomous ones. Serpent Eagles have thickened skin along their talons and legs to prevent snakes from biting them, not to mention they have their hunting techniques down! 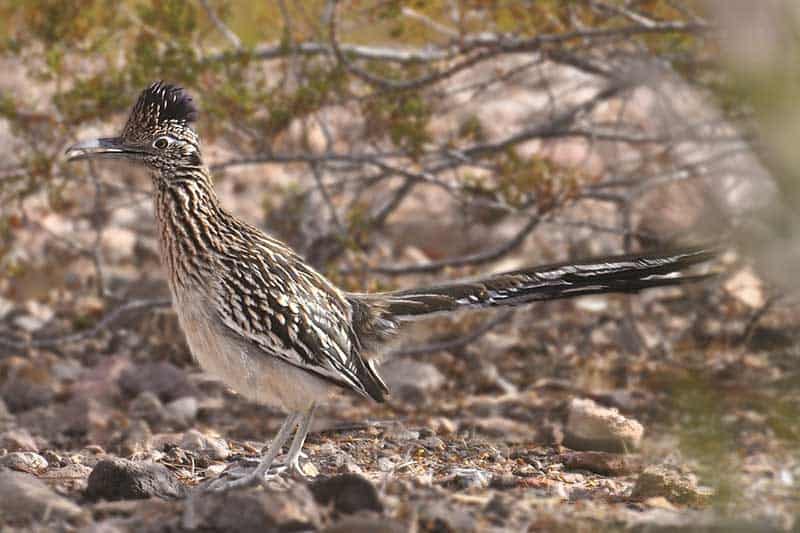 However, Rattlesnakes will also eat Roadrunners, so in some cases it is anybody’s game. Roadrunners have speed on their side, while Rattlesnakes have venom that can give them the upper hand in a stand-off with a Roadrunner. 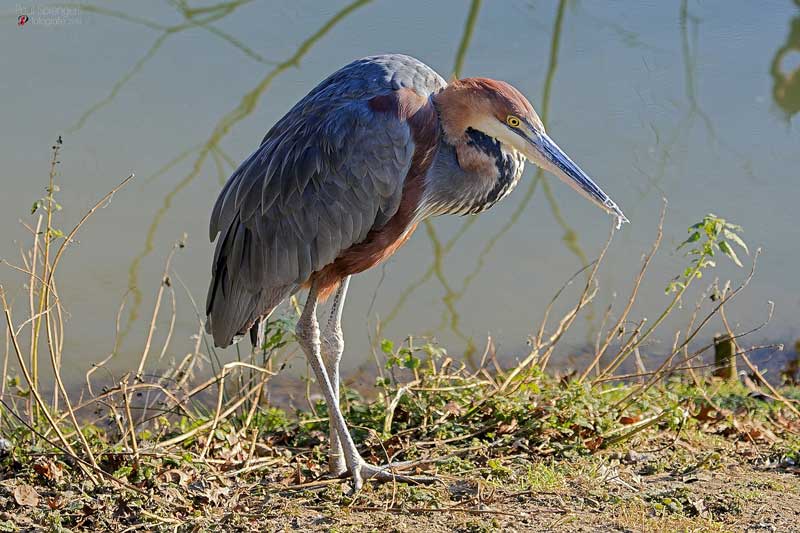 Herons are water birds, so snakes don’t seem like the first choice for a meal. But, Herons are amazing hunters and have mastered eating water snakes like Water Moccasins or even snakes that may be found along the water’s edge.

Herons use their long, pointed beaks to effortlessly pluck snakes out of the water as they writhe around. Heron’s will consume snakes by the head first. 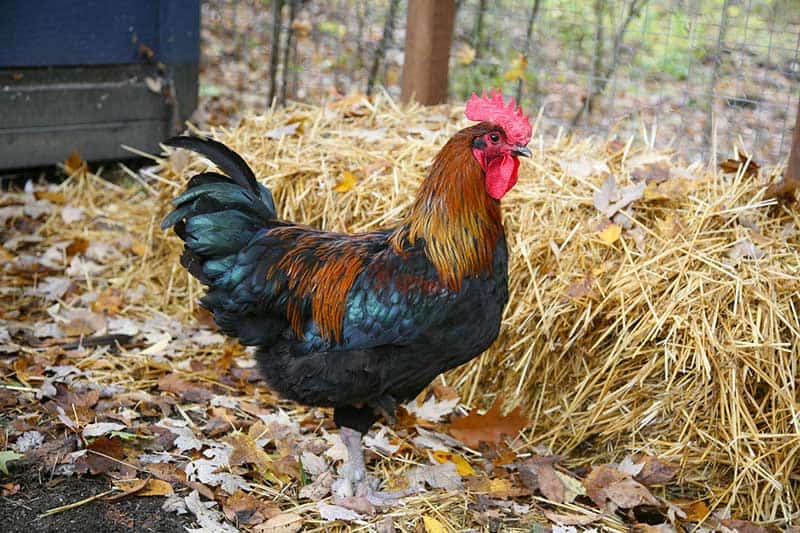 Now, Chickens have a bad reputation for being stupid, poorly-coordinated birds mostly used for eating or their eggs. But they can also be effective hunters and are able to take down snakes.

Chickens are pretty weary of snakes, and regardless of whether or not they intend to eat a snake, they will attempt to kill the snake. The snakes that they eat though, they slurp up easily and quickly.

Guinea fowl are chicken-like birds that actually specialize in taking down intruding snakes. They’ve been known to work together as a group and create a circle around a snake and eliminate the threat as a team. See the video below.

When you think of Ducks, you probably don’t think of them being cold-blooded killers. But Ducks have actually been known to eat snakes, including venomous snakes! Apparently, there are even certain breeds that are especially prone to eating snakes, like Muscovites that people recommend getting for those looking to deter snakes from their yards. 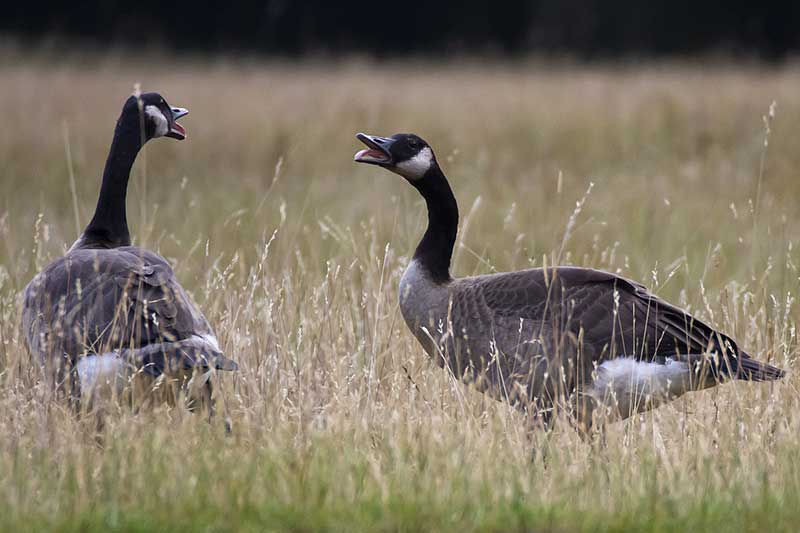 Of the domesticated birds, Geese are certainly known for their testy attitudes. Their attitude is probably what makes them such a fierce match for certain species of snakes, as Geese will slurp up smaller snakes like it is nothing. In Thailand, many people keep Geese for this specific reason. 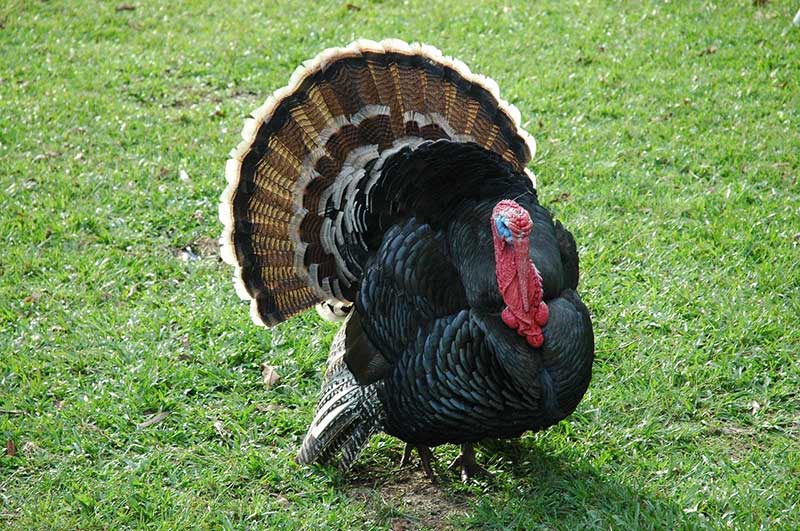 Turkeys will hunt and eat snakes, but tend to take a group approach. However, a single Turkey should have no problem taking down a snake on it’s own as long as it isn’t too big. Once a flock or group of Turkeys locates a snake, they will crowd around the snake and harass it before grabbing it and ripping it apart- not a pleasant way to go by any means! 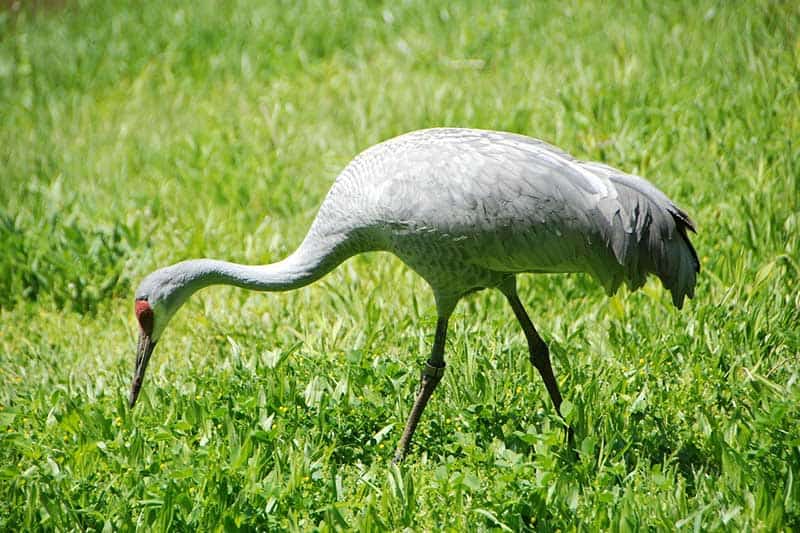 Like Herons, Cranes are water birds and prey on many food items that can be found in the water. This can also include water snakes! Cranes are actually omnivorous and eat both plants and animals found in aquatic habitats.

Typically, Cranes have a diet made up of mostly plants and vegetation, but will change their diet depending on what’s available, making any snake to cross their path unlucky! 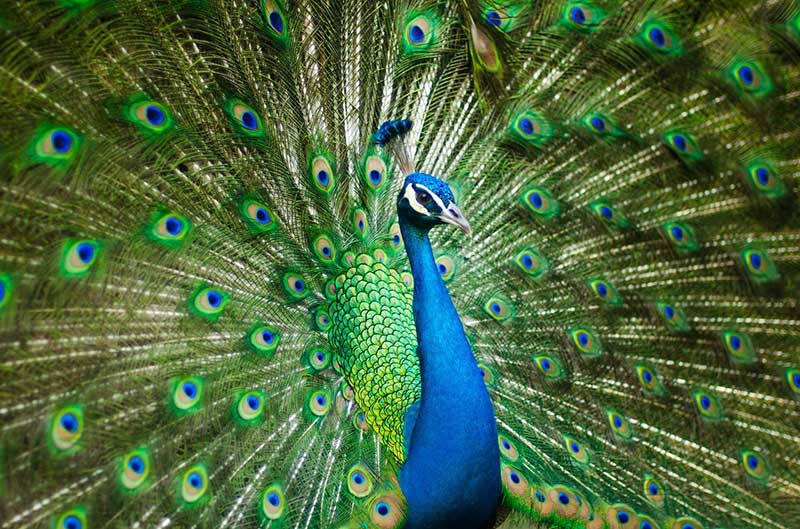 Peacocks are known for many things, their beautiful feathers, their incredibly loud screeching calls, and for being a sign of regality. But did you know that Peacocks eat snakes?

Peacocks are native to Asia and Africa which is also home to some of the deadliest venomous snakes on earth. In ancient India, palaces actually kept Peacocks in order to drive away Cobras and other snakes. 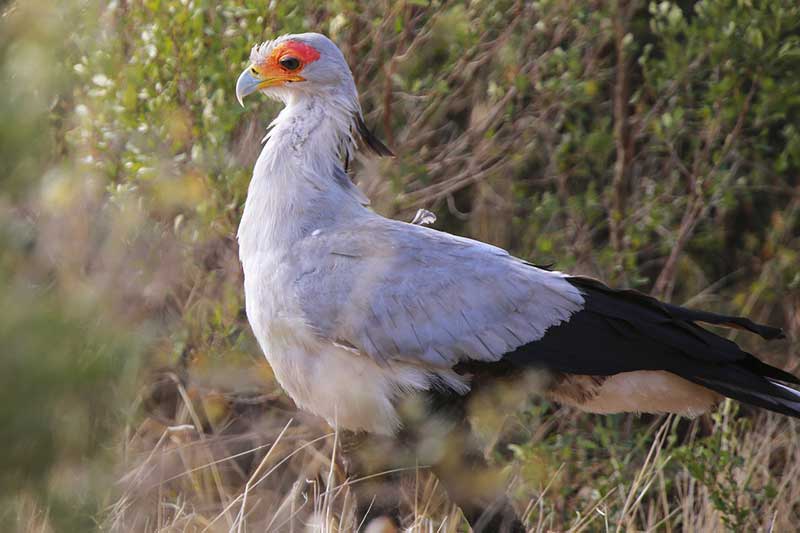 While not the most common birds, Secretary Birds are a known snake eater. Secretary Birds have incredibly long, powerful birds that they use to kick with incredible force. They are native to Africa, where they eat several species of venomous snakes.

Secretary Birds will stomp around tall grasses to spook snakes out of the grass, which they then focus in on and chase after at break-neck speeds. They are thought to sometimes fly up into the air with a snake in their grasp and then drop it to their death before feeding on it. 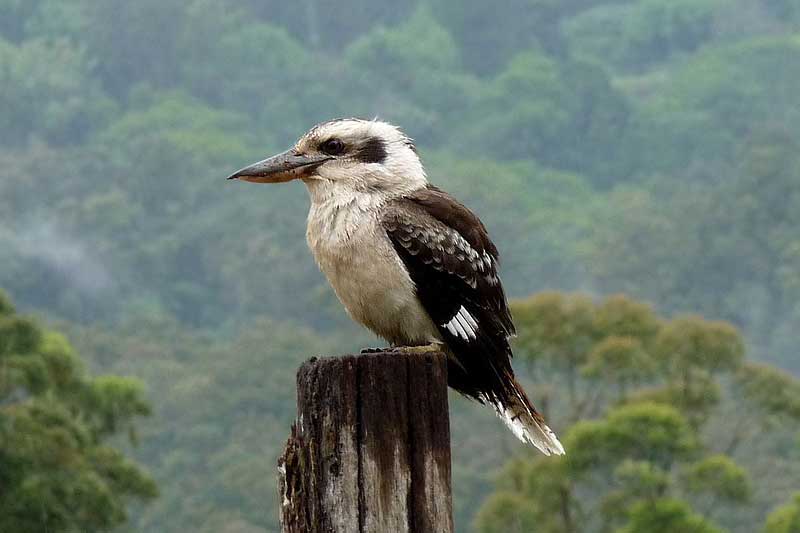 Kookaburras, native to Australia, have a lot of choices when it comes to food. They eat snakes, and luckily for them, Australia is home to loads of different species of snakes!

Kookaburras use a sit and wait technique, where they will perch on a branch overhead and wait for their unlucky victim to slither by. When they see a snake, they will swoop down and grab it before slurping it up whole or bashing it against the ground and then slurp it up.

While many people assume that it is mostly snakes preying upon birds, there are actually lots of different types of birds that eat snakes. Some of these birds may also be eaten by snakes, however in those cases it mostly comes down to who is bigger to decide who gets eaten.

The birds that eat snakes are a diverse group, from water birds, birds of prey, domestic birds, and others. Some of these birds don’t seem like they would have the toughness factor to gobble up a serpent, but the animal world never ceases to surprise us!